I've only entitled this blog post the way I have because if I don't someone will do it in the comments. 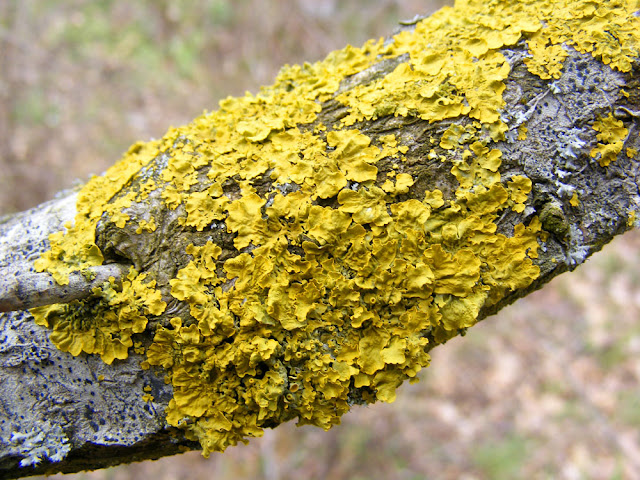 I went on a most enjoyable lichen outing on Saturday 7 April, organised by my friend Marie-Claude. She's become a real expert on the subject and is busy training up others. I was super impressed by how much work she had put in to make sure we all got to grips with the lichens we were looking at. The site chosen was the Puy de Besnard La Colline near Chinon*. It's a nature reserve on a sandstone topped limestone ridge, full of rare species of plants and no doubt other orders too. I've written about visiting it the Puys de Chinonais before here and here. 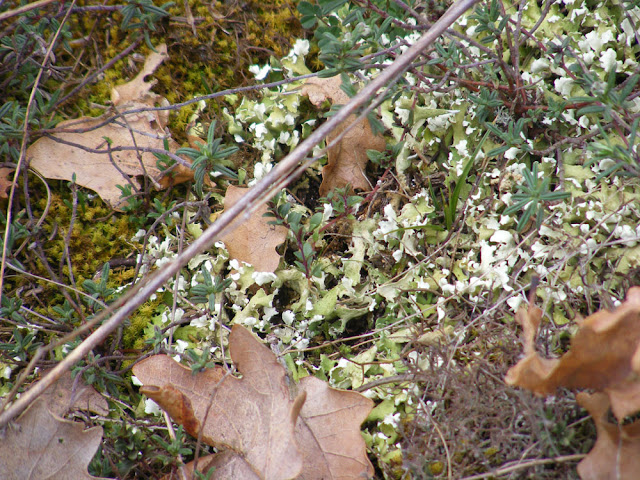 Marie-Claude had prepared sheets of photographs of each of the possible species and made it all look so easy. She has been greatly supported in her learning about lichens by Jeannine. 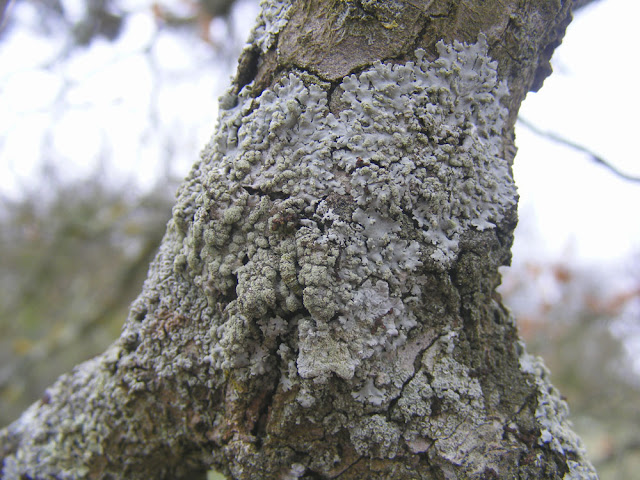 Jeannine had a marvellous story about how, some years ago, when she first got interested in mosses and lichens, she found some specimens she thought were rare, or at least unrecorded in our area. She made an appointment with the leading lichenologist of the day, who worked out of a fusty dusty back room in one of the big natural history museums. 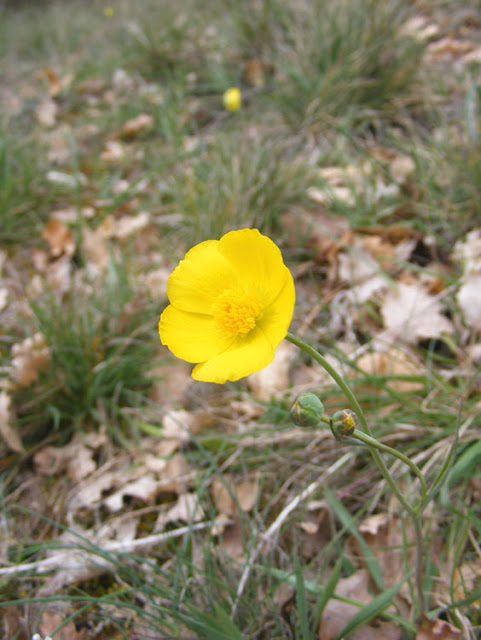 When she got there and showed him her specimens he was intrigued. He asked where she had found them. 'Chinon', she said. 'Where's that?' he said. 'In Indre et Loire' she replied. 'Jean! Jean!' 'Claude ! Claude !' he called out to a colleague, 'We've got people from 37 here!'.* Each of the French administrative areas called départements are numbered and Indre et Loire is 37. Apparently to live in 37 is to be unimagineably exotic.


The group gathers around to look at a lichen. 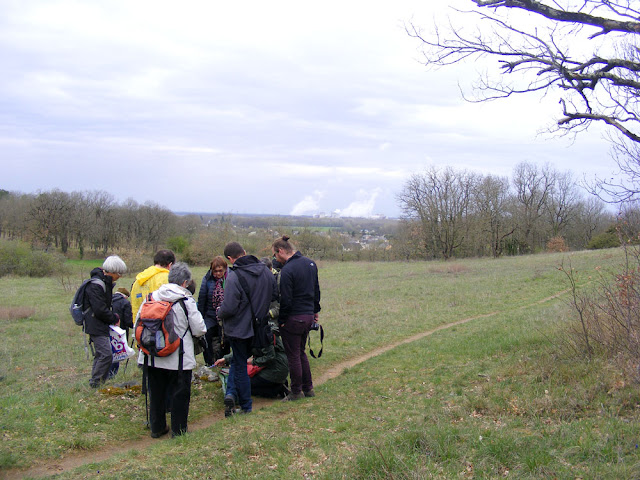 We saw some very common species and some very rare species. Common Orange Lichen Xanthoria parietina (Fr. Parmélie des murailles) is a leafy, bright yellow, abundant and widely distributed lichen. Technically it is a fungi that has been lichenised by algae. It's one of the most familiar lichens due to its high visibility, and because it is one of the most studied. The bright yellow colour is a pigment produced by the lichen to protect itself from sunlight. It will be grey-green where the sun doesn't reach it. It occurs all over the world with the exception of Antarctica, and will grow on many substrates, especially if they are in the sun. It's not fussy, whether it's on trees or buildings, but is especially partial to spots that have plenty of bird poo stuck to them. In France it is very common, occuring everywhere except the high mountains. Recent research has revealed that it has antiviral properties that may be useful against influenza. In the old days it was mixed with urine and used to produce a pink dye for woollen textiles. 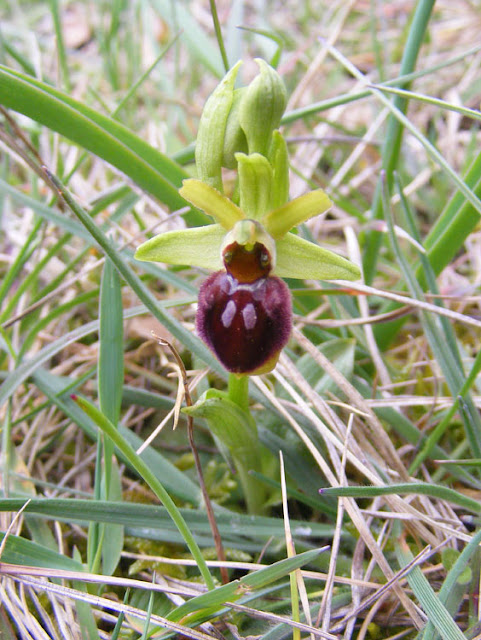 Cladonia foliacea is one of the so called 'reindeer mosses', which are really lichens, and a largish genus with many species that closely resemble one another. Reindeer themselves mostly only eat one species, C. rangiferina, which we didn't see on the day. The C. foliacea was growing with C. rangiformis (the brown wispy bits bottom right in the photo above) and C. furcata. They are common lichens of sandy or calcareous soil, so right at home on the Puys de Chinonais. 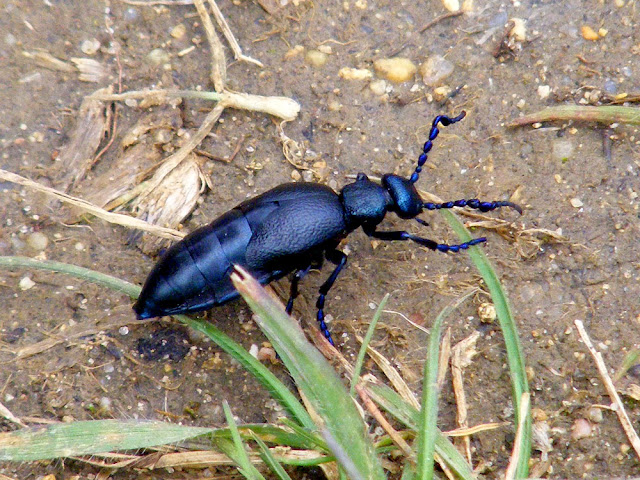 Physcia tribacioides is a real rarity in our area. La Colline is the only recorded site for it in Indre et Loire. It seems to be dying out, as it is associated with older trees and undisturbed sites such as churchyards and old private parks. It is a leafy lichen that is naturally a grey-green colour (some lichens are pruinose, with a powdery surface that gives them a grey-green appearance but hides their real colour, which could be very dark). Petractis clausa is also only recorded on La Colline in 37. 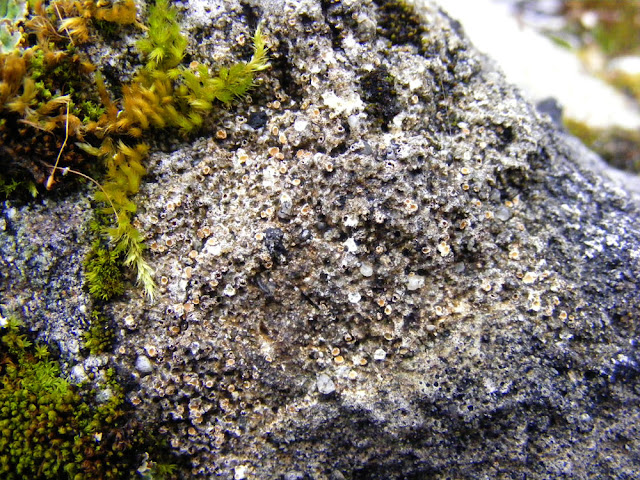 Grassy-leaved Buttercup Ranunculus gramineus (Fr. Renoncule à feuilles de graminée) is a southern warmth loving plant of dry grasslands, on the edge of its range here. It is rare and protected in Centre Val de Loire. Nearby was a colony of the first orchids I've seen in flower for the season (we saw two species flowering), and a male Violet Oil Beetle Meloe violaceus (Fr. Méloé violet) ambling about. I assume he's munching on the rare buttercup and the equally rare Pasqueflower Pulsatilla vulgaris (Fr. Anémone pulsatille) as he will need the poisons they contain to protect himself and his offspring. 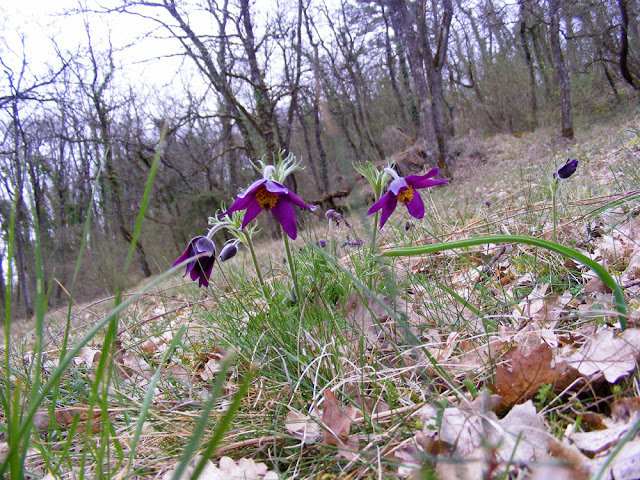 Marie-Claude scouring the ground for lichens. 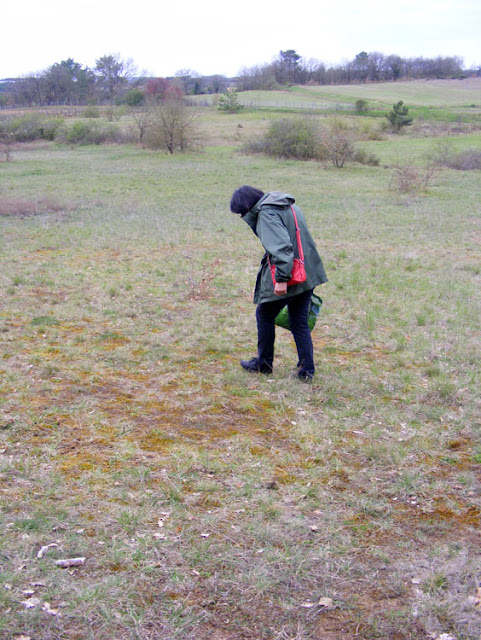 Wrapping up the day with drinks and practicing our identifying skills with close up photos. 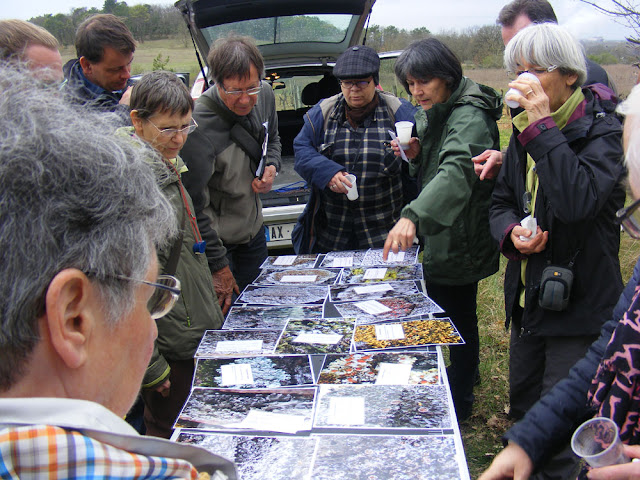 * Both Marie-Claude and Jeannine have been in touch with me to point out that we were on La Colline, not Puy Besnard. They are both landscape features known as the Puys de Chinonais. Jeannine also pointed out that the lichen expert in her story was Monsieur Boissière and he called out to his colleague Claude Roux. When I came to write the blog I couldn't remember the names of the people she was talking about, so I opted for a generic version.

I love how every French activity ends with a glass of wine, including in a plastic cup.
I noticed a bunch of lichen near a bumper crop of wild orchids. I had no idea about the various kinds, but now I'm glad I made an effort not to step on it.

Are there any young people interested in these formative and very informative outings?

I noticed that two younger-looking folk are in the group examining lichen.

Lichen is great, but I'll never get to grips with it like Marie-Claude has.

Sometimes we finish with home made cider :-)

Clément (the guy with the topnot) and the guy standing next to him (whose name I can never remember) are both in their 30s and we have a couple of other members in that age group.

Make sure to drop it into conversations at every opportunity :-)