On Saturday I joined friends Carolyn and Tim on a hunt for the rare wild flower Snakeshead Fritillary Meleagris fritillaria (Fr. la Fritillaire pintade). I gave them a list of sites that I knew of and they chose the Véron, the area of land between the Loire and the Vienne rivers, west of Chinon. Sadly, we didn't find many fritillaries, especially compared to previous visits, but we did see some nice things. 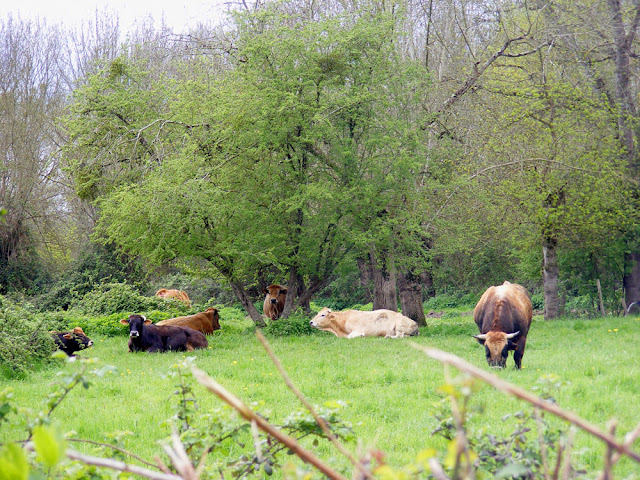 The Véron along the Vienne is laid out in traditional bocage pasture, with small fields surrounded by hedges. The soil is permanently damp and the grass is lush. Very little of it is used for grazing now though. About half of it has been planted with poplar trees and the other half must just be cut for hay.


Whose poo is this? We didn't see any Brown Hare Lepus europaeus (Fr. le Lièvre d'Europe), but they are obviously here. There was a collection of telltale droppings on a track. 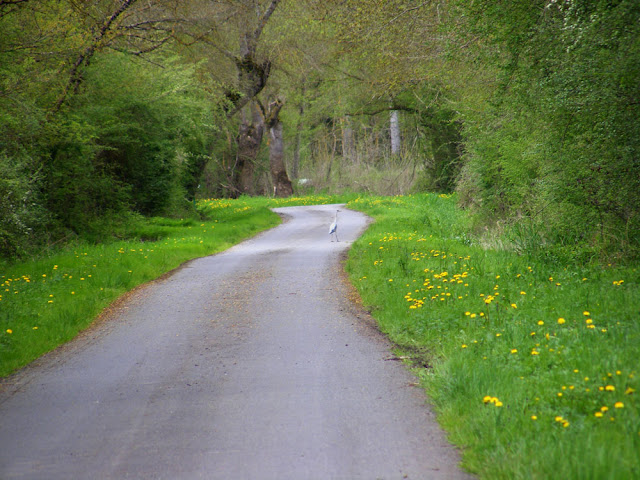 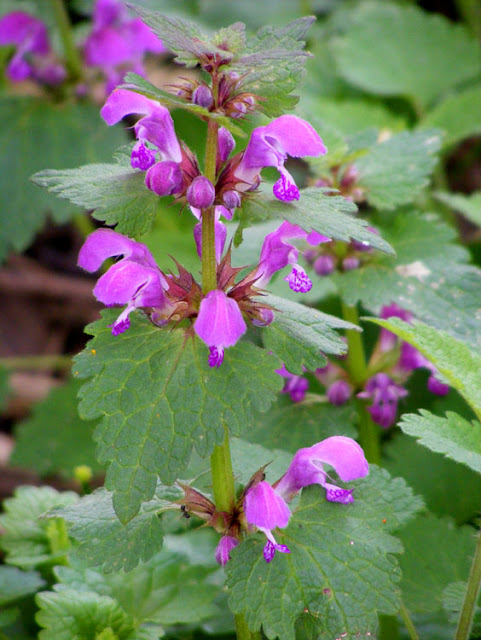 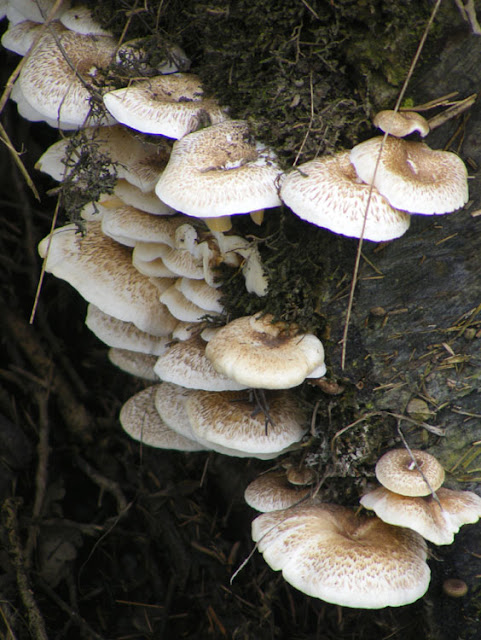 On one old felled tree trunk (ash or poplar, but I couldn't tell for sure) there was an outbreak of the bracket fungus Lentinus tigrinus. It's an impressive fungus that I have seen before on felled poplars on the banks of big rivers in France. It likes dead timber that has been saturated, and is seen almost exclusively on poplars or willows. 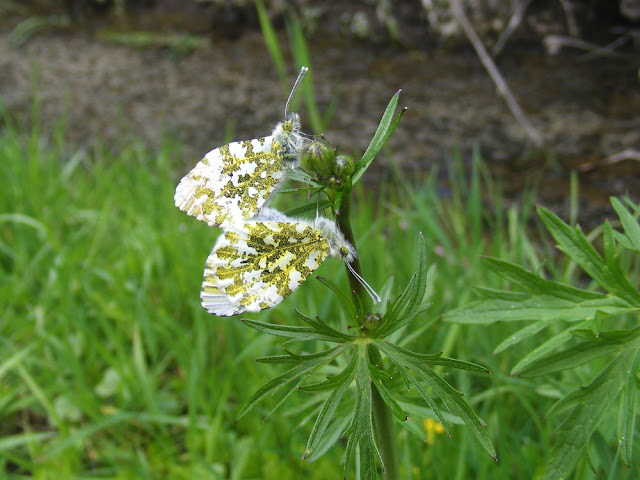 
Old Ash trees along a ditch. 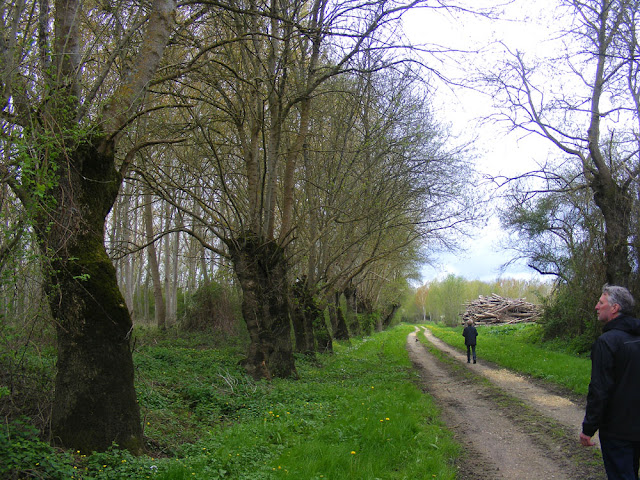 At this time of year it is very obvious that many of the fields are still bordered by old Common Ash trees Fraxinus excelsior (Fr. le Frêne élevé). Once, they were pollarded and probably the prunings would have been used to augment the grazing cattles' diet in the summer when the grass was drying out. Now no one maintains them and the cattle have mostly gone. The trees get older and more gnarled, a lot of them are hollow, providing nest sites for all sorts of creatures -- bats and other small mammals, birds and insects. Ash trees are traditionally used in these damp environments as their roots help stabilise the banks of canals and ditches, but without being continually pollarded they will start to suffer from wind damage I should imagine. The old pollarding level is a weak point and once the branches get big enough, that is where they are likely to snap. 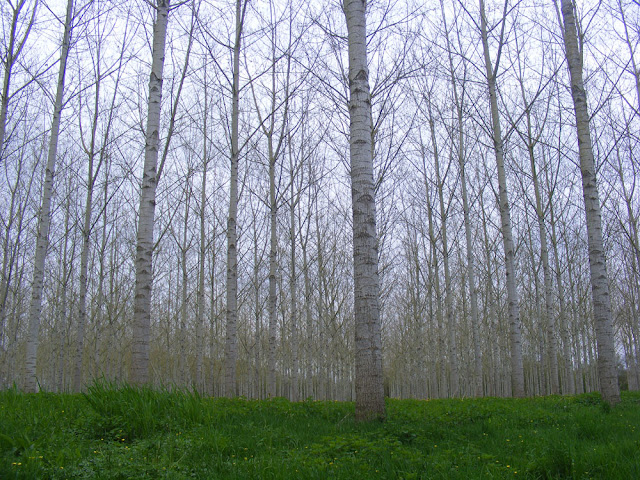 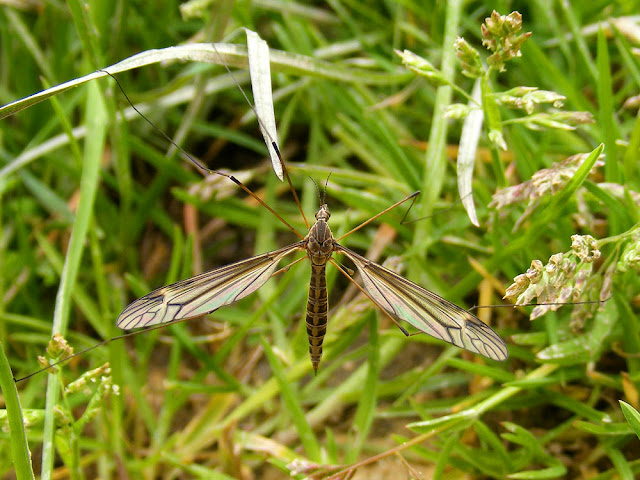 Early spring brings out certain species of crane flies too. This female is Tipula lateralis. This species inhabits damp grassland.

The bocage of the Véron is a strange beautiful hidden secretive world. Walk around it and you will encounter virtually no one. A jogger, a dog walker, a few fishermen down on the river but that is all. Very little man made noise (a boat on the river perhaps) but lots of bird song. And all within easy walking distance of some excellent wineries in the Chinon AOP whose vines are planted on the sandy soil a bit further back from the river. All the little fields and parcels of land are privately owned. Slowly it is beginning to change, as traditional grazing is no longer practiced. To make any money out of the land many owners have chosen to convert to poplar plantations. There is currently no protection for the bocage except the goodwill and knowledge of the private owners.

Coypoo poo!!
Very distinktive....
The trognes, being ash and slow growing, look not to have been pollarded this century... they really need a flat-top in the next 20 years to survive.
Love the Aubrac cattle, very pretty.

Fab post Susan. Nature is so marvelous, such a variety!

Very interesting will look into it Susan, thank you . Ceri