This one is complicated...

Maria de Medicis was born a member of the "other side" of the Florentine Medici family, being descended from Lorenzo the Magnificent via her great-great-grandmother, Lorenzo's eldest child. She was Henry IV of France's second wife, replacing (in 1600) the barren Margaret of Valois. There is some evidence that the marriage was a very commercial transaction, as Henry owed huge amounts of money to Maria's father, the Grand Duke of Tuscany, who had helped finance his war against Henry III.

The marriage was not a happy one, although it produced a string of children, including an heir, a couple of spares, a Queen of Spain, and a Queen of England. Henry had a string of mistresses, one of whom (Catherine Henriette de Balzac d'Entragues) he had promised to marry when his official mistress (Gabrielle d'Estrées) died. Failing to do so and marrying Maria instead meant that the two women were constantly at each others (metaphorical) throats, with plenty of name calling on both sides. 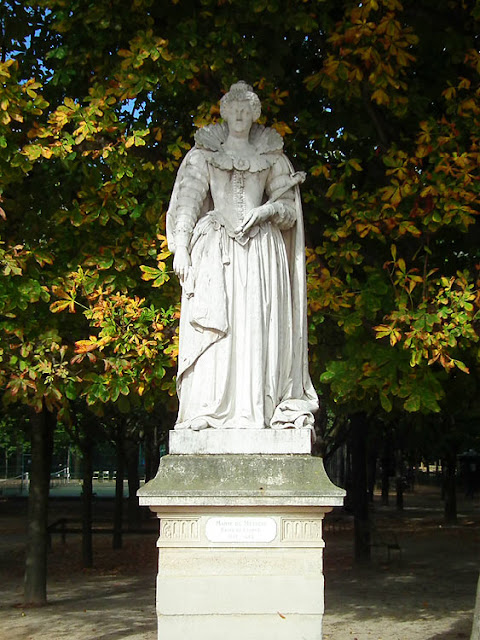 Part of Maria's efforts to upset the apple cart included supporting Marguerite de Valois (Henry's first wife, remember), encouraging Henry to allow her back into France. Maria was finally crowned Queen of France in 1610, and the next day her husband was assassinated after being caught in a traffic jam in part caused by the crowds attending the Coronation.

Maria served as Regent for her son (Louis XIII) until 1617, at which time Louis banished her from the court. In 1619 she provoked her third son (Gaston d'Orleans) into rebelling and trying to claim the throne, but after the failure of that enterprise she and Louis reconciled - until 1630, anyway, when she tried to lead a rebellion against Richelieu. This failed, and Marie spent the next 12 years travelling around Europe, visiting Brussels, Amsterdam and London, before dying in 1642 in Cologne.

We have written about Marie de Medici before here.

The Jardin du Luxembourg has statues of 20 French Queens and Illustrious women. The subjects were chosen by Louis-Philippe I in 1843. This statue was created by Louis-Denis Caillouette in 1847. To see Margeurite looking complicated you have to go here.

Eventually all 20 statues will be featured here.