Also known as Marguerite de Navarre and Marguerite d'Alençon, Marguerite d'Angoulême led a very complicated life: married twice, wife of a king, sister of second king, and grandmother of yet another king, patron of the arts, poet, diplomat and religious provocateur. 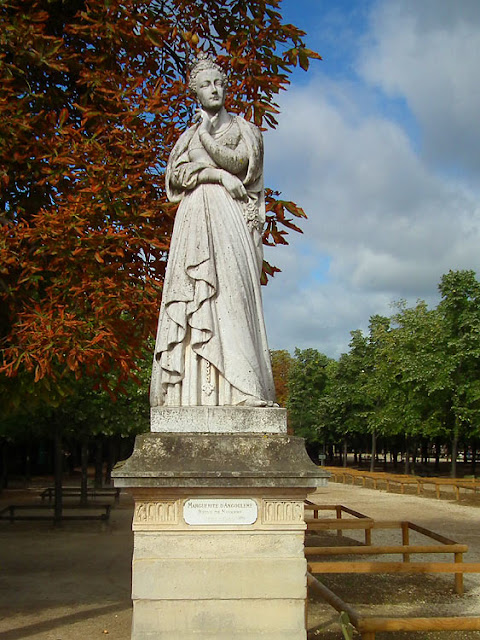 With her brother, François I she invited Leonardo to France and installed him in her home, Clos Lucé. She also invited trouble by writing a very long (and quite weird) poem, Miroir de l'âme pécheresse (Mirror of the Sinful Soul). It was enough to have her accused of heresy, a charge her brother had to fight long and hard to have overturned. The poem found its way into the hands of the 11 year old English princess Elizabeth, who translated it into English and gave it to her stepmother, Catherine Parr. It is claimed that the poem was in part responsible for the Protestant fervour of Queen Elizabeth I.

The Jardin du Luxembourg has statues of 20 French Queens and Illustrious women. The subjects were chosen by Louis-Philippe I in 1843. This statue was created by Joseph-Stanislas Lescorné in 1848. To see Margeurite looking pensive you have to go here.

Eventually all 20 statues will be featured here.