Valentina Visconti (1371-1408) was born in Milan, the daughter of the first Duke of Milan and his wife Isabelle, daughter of King John II of France.

All these connections made her a valuable asset in the marrying them off game, and negotiations were soon underway for marriage between Valentina and Carlo Visconti (Lord of Parma), Valentina and John of Görlitz (brother of King Wenceslaus of Bohemia), and Valentina and Louis II (King of Naples). All of these fell through, and she was eventually married off to Louis, Duke of Touraine, brother of the reigning Charles VI (the Mad) and second son of King Charles V of France.

Charles VI may have been mad, but little brother Louis was a schemer and trouble maker, which led him to conflict over the regency with John (the Fearless) of Burgundy. Unfortunately Louis had a reputation as a womaniser which made him very unpopular - so much so that when John the Fearless had Louis killed in the streets of Paris no-one in Paris much cared. It did, however, spark a conflict between the two houses that lasted 70 years, known as the Armagnac–Burgundian Civil War. 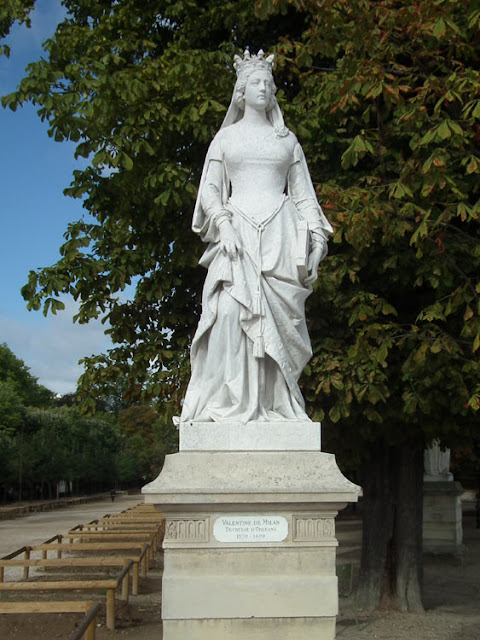 By this time, Valentina had got into a little bother of her own, having been banished from court by the Queen who, it was rumoured, was one of those having an affair with Louis. Valentina died about a year after her husband, having lived in Blois for the last 6 years of her life.

The Jardin du Luxembourg has statues of 20 French Queens and Illustrious women. The subjects were chosen by Louis-Philippe I in 1843. This statue was created by Victor Huguenin in 1846. To see this statue of Anne you have to go here.

With your Queens series and their early betrothals, I was suprised recently to see that some states in the U S o A do not have a minimumum age for marriage. I suppose that this is a world-wide phenomenon.

In the Middle Ages betrothal was a serious business contract, but it did not mean that a marriage was consummated. The normal age for sexual relations to begin was 14. That's when people were considered to be adult, and even in the Middle Ages they recognised that girls who got pregnant too early were much more likely to die and so would the baby.

As you can see I got my 'mini- mums' over the top! Thanks for your explanation, mind you 14 is still a touch early.

Is there a minimum marriage age in the U.K.? In some U.S. states, if parents and a Superior Court judge are in accord, any minimum age is waived. Ain't American-style freedom marvelous?

I presume there is a minimum age and that it is the age of consent, which I believe is 16. I know that you can't get married before 8am in the UK because you have to marry in daylight so you are sure you are marrying the person you thought you were.

Yes and what surprised me,when we married, was the many many questions we were both asked individually about each other to make sure we were who we said we were and it wasn't a marriage of convenience!

C&E, yes I think we were grilled as well (can't really remember -- nearly 20 years ago!)