At the end of October there was a fungi foray in the Forest of Loches. It was jointly organised by the Association de botanique et de mycology de Sainte Maure de Touraine and the Tourist Office of Loches. Most of the people who came had signed up to learn about fungi from Didier Raas, a local pharmacist and well-known expert. He led this group, who I imagine were mostly interested in foraging for edible mushrooms. We noticed how many grandparents with kids in tow there were. It was the Toussaint school holidays, and mushroom hunting is a traditional passtime that many families would want their children to learn about.


People registering to go on the outing. This is about half the number of people who turned up. 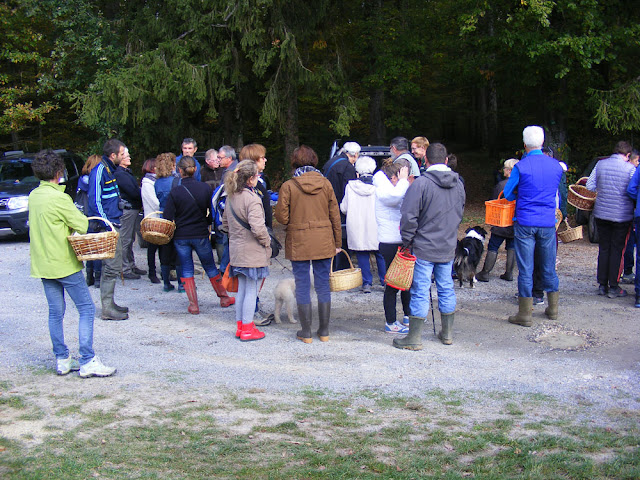 The Association for Botany and Mycology on the other hand is interested in regularly monitoring and surveying the local forests to record biodiversity. I had brought my friends Alex and Nicole. They were interested in learning about mushrooms because they want to go foraging for the table, but I suggested that we keep the day as a learning experience and go with Jean Bouton, who knows his edibles very well, but also all the other species and is full of top tips and helpful information. The reason for having a combined outing is because it's hunting and tree felling season and you have to get permission from the Office national des forêts to go out in numbers to pick mushrooms. We only had permission to forage in certain parcels.

There wasn't much to be found due to the dry warm weather we had been having, but we still managed to enjoy ourselves. Nicole is English but speaks quite good French. She was amused right from the beginning when she overheard someone quizzing one of the very knowledgeable but self-deprecating members of the Association. He is a retired pharmacist, and the woman grilling him wanted to know about what his qualifications were for leading fungi outings. Apparently he didn't pass muster...I suspect the woman was no loss to our half of the outing. 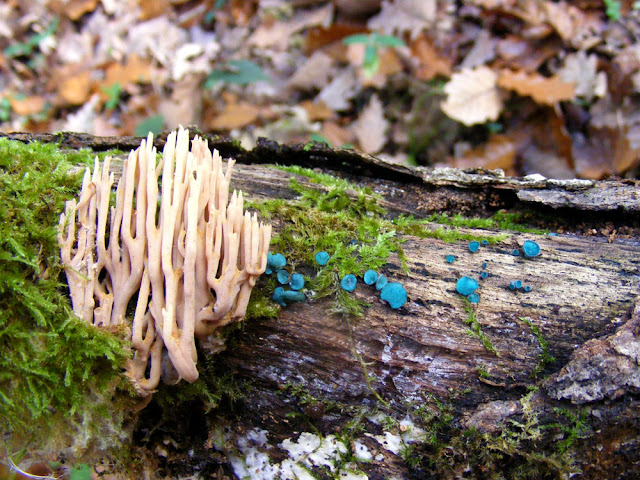 Later there was exchange about a slug hiding under a cep. Nicole pointed it out and was jokingly told not to be too quick to throw it away. With the butter shortage she might find the slug came in handy to throw in with the mushrooms as they cooked, it was suggested. Then there was the man who took his leave but noticed a large Parasol Mushroom on the side of the road. He leapt out of his car, picked it and rushed back. It was a magnificent specimen and he was determined to show it off and 'win' 'largest mushroom of the day'. Didier Raas encouraged Nicole and me to taste the stem ring on this prize mushroom, saying it tasted like hazelnut raw, and it really did! 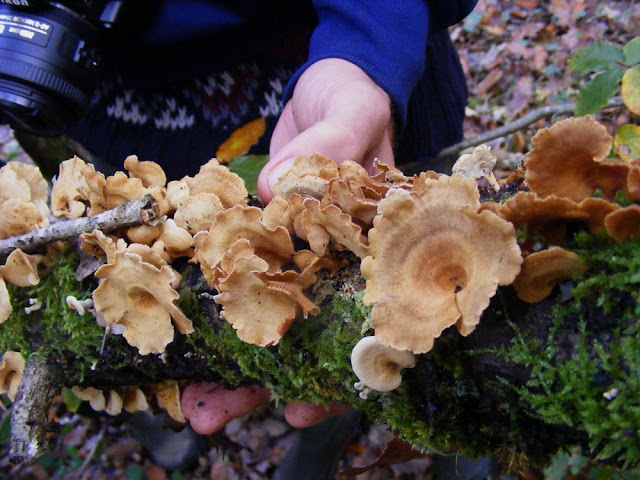 One of the first fungi we found was the Candlesnuff, covered in a white powder which Jean told us was sterile spores. The real spores are black and hidden inside the antler-like fungus. Candlesnuff fungus will often be found in the autumn. Not being able to deal with either cellulose or lignin, it attacks fallen wood after it has already been partially consumed by Honey Fungus and Sulphur Tuft.

Then we started finding Upright Coral. It was all over the place in the leaf litter, attached to fallen sticks and small branches. One branch had both Upright Coral and Elfcup growing from it, making a very pretty combination. Such a shame it would never have lasted as a table decoration. 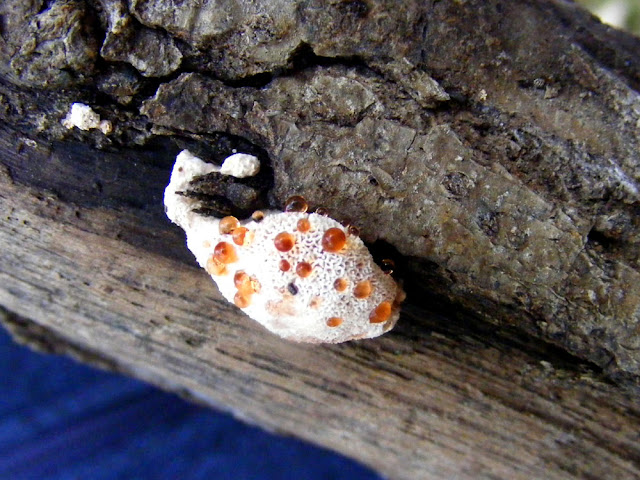 When we found some Bitter Oysterlings Jean made sure to tell us that if you taste it the bitterness takes several minutes to develop, but is quite powerful. Both the Bitter Oysterling and the Candlesnuff are apparently bioluminescent, as are Honey Fungus and Sulphur Tuft which we also found in the same area, a mixture of beech and oak trees. It makes me wonder what the forest looks like at night. A very faint glow on a very dark night would be my guess. 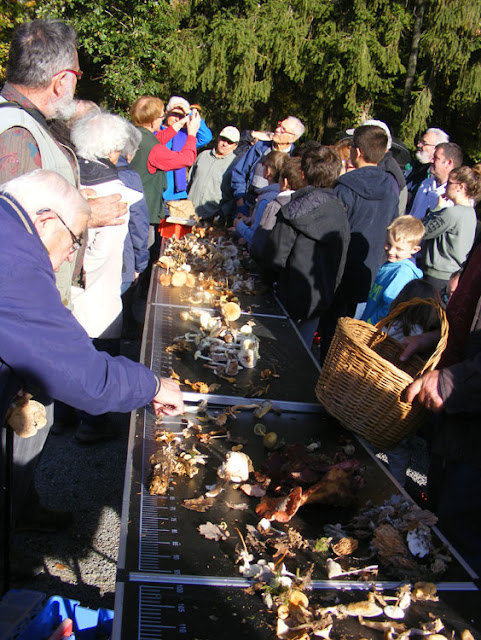 Bitter Oysterling was believed to help to staunch bleeding wounds. Elfcup colours wood blue-green and such wood has been used decoratively in marquetry since at least the 14th century. Root Rot is one of the most significant threats to commercial sylviculture.

What an intersting outing. I'm sure that you photographed the interesting looking ones and I am equally sure that I would NOT want to eat any of them - even with the thumbs up from M. Raas.

None of the ones I photographed are considered edible -- that applies to a lot of fungi. They are not toxic, but not worth eating either.