Here Are Your Sons

This memorial to the dead of the First World War is hidden away on the western end of the Ile d'Or in Amboise, behind a building site and the youth hostel. It dates from 1971 and is one of several memorials to the dead in the town, including a war memorial on the Mail (the main drag).

The inscription reads 'Mère voici tes fils qui se sont tant battus' (Mother here are your sons who fought so hard). It comes from a poem by Charles Péguy, a French poet and essayist who was killed at the Marne in 1914. The poem is called Eve and is a phenomenal 9000 lines arranged in Alexandrines. Péguy was above all a French patriot, whose work was adopted by both Vichyists and de Gaulle during the Second World War. 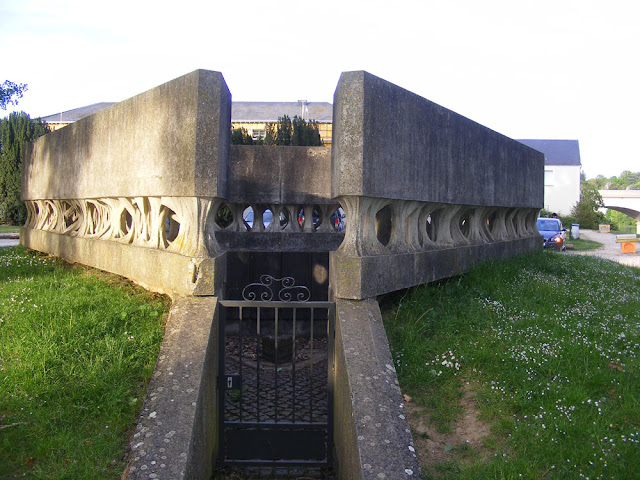 Triangular in form and set into a mound the memorial is constructed of big blocks of reinforced concrete. Inside the names of the dead are listed. The work is by Henri-Paul Derycke and is on loan from the National Collection of Contemporary Art (as is the fountain by Max Ernst).

It is not very visible and no one ever places flowers on it, or appears to maintain it. It is not owned by the town, and one gets the sense the monument was sort of dumped there by the State. Amboise has over 20 monuments to various wars and other public sculptures, and the town itself only owns half of them.

Whilst Max Ernst's fountain has recently be lovingly restored, this memorial appears to be more or less abandoned. There are no clues to who commissioned the monument that we can find or why it is on the island, either on the monument itself nor on line.

Update: A friend who lives in Amboise has sent a link to a local newspaper article about public statuary in Amboise from 2012. It still doesn't explain who commissioned this monument or why at that time. The article also mentions a work by Alexander Calder, about which a completely different disagreement is currently rumbling.

Sad....
However, the artist/sculptor seems to have been inspired as he ate a pizza.... the threads between the upper and lower block look like strands of melted mozzarella.... and the shape is a triangle.
This could be the reason why it is on a neglected spot at the end of the island... someone saw the resemblance but they couldn't refuse the "loan".... and the NCCA were probably glad to get rid!

Any town would be proud to have such a monument.Perhaps as it was NOT paid for by locals it has become unloved.

When we lived in the Vendee there was a memorial to an American fighter pilot downed in WWII It was out in the middle of a farm field (where they found the plane) with no markers, but always perfectly maintained and a small service there every Nov. 11.

The mozzarella looks better in real life. They are more like the bases of buttressed tree trunks, quite Art Deco.

It's very unusual for a war memorial to be ignored like this in France. The other thing that struck us as odd is the date of its construction. 1971 doesn't seem to relate to anything relevant to the First World War.

Exactly. There are memorials all over the place, in the forests, on roadsides -- all of them are cared for and have wreaths laid at least once a year -- except this one! There are several US airmen buried in the Loire Valley too. The sites are designated as official war graves and maintained by Souvenir Francaise, just like the French graves.

Susan, you don't think that this one has just slipped totally off the radar, do you?
Could explain it.....

My suspicion is that because the town doesn't own it they are unwilling to pay for its maintenance. It's not by anyone sufficiently famous and it's too hidden away for it to be noticed if it isn't maintained. Mind you, it's right next to the newly restored youth hostel.