The Painted Church of Antigny

The church at Antigny in the Gartempe valley in the Vienne, to our south-west, is so amazing, with so many details worth looking at, that I fear I will not do it justice in a brief blog post. It is one of a string of painted churches along this section of the Gartempe, the most famous of which is Saint Savin. Don't get me wrong, Antigny is no Sistine Chapel (although it does share some characteristics with Leonardo's Last Supper). The thing about the church at Antigny is that many of the most extraordinary paintings are at eye level or just above, not up so high you really need binoculars to appreciate the detail. The paintings are in a limited palette of colours and vernacular in style. They are not frescoes (ie painted on damp plaster) but wall paintings (ie painted on dry plaster). Perhaps the most significant thing about them is that although I think they have been wholly or partly covered in render at some point, they have not been damaged by being hacked at with a pick to create a key for the later render, unlike many rediscovered wall paintings. The restoration in 2005 revealed at least six layers of wall paintings and successive renders.

The lanterne des morts, opposite the church in the former cemetery.
Lanternes like this are somewhat of a peculiarity of the Poitou area. 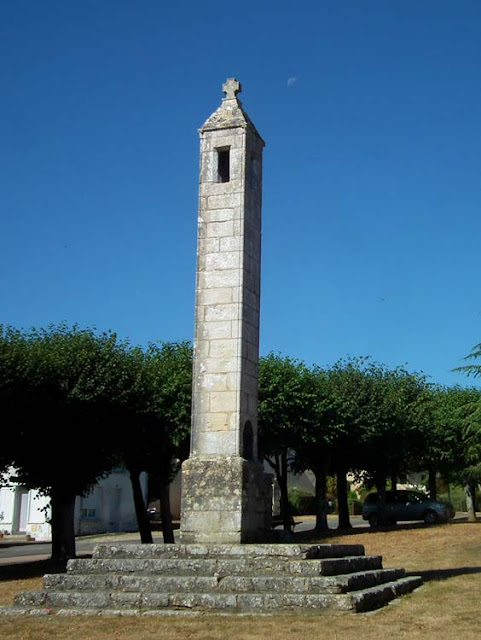 The visible paintings date from two different periods, with late 12th century works on the north wall of the nave and the rest from the 14th century. But the paintings are not the only things worth looking at in this church. Yes, there's more! The architecture of the church itself is a bit unusual, with a large porch to the southern side, called a caquetoire ('cacklehouse'), also known in the Poitevin dialect as a balé, and by the front door a slab of stone resting on four short carved pillars which was for resting a coffin or body on before it went into the church for a funeral, called an édicule. The coffin rest has two grooves at one end and a circular depression at the other, probably for draining away fluid seeping from shrouded bodies on the slab, in the days before coffins were commonplace. The church is solid looking, with a square tower ornamented with fleurons.
The church at Antigny, with its rather squat square tower. The porch is on the right. 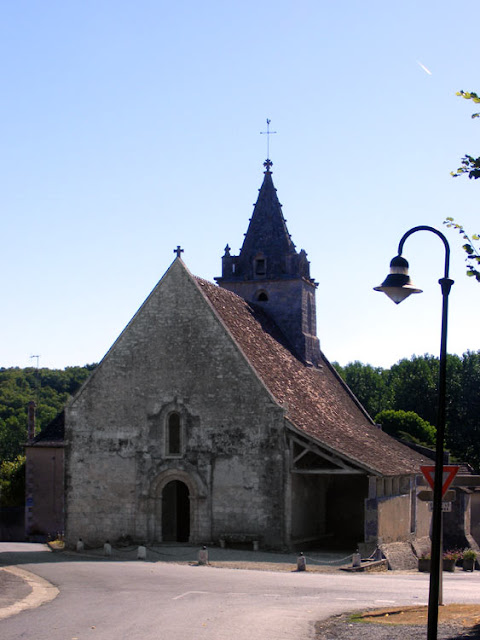 The church was built in the 11th century on the site of a Merovingian cemetery, and was subsequently remodelled in the 15th and 18th centuries.  The nave is covered by a timber vault in oak. The wall paintings have been recently restored and many new details have been revealed. The chapel, dedicated to Saint Catherine, was built in 1421 by Renaud de Mauléon, Lord of Bois-Morand. The interior decor was commissioned by Jean de Moussy (1433 - 1510) also Lord of Bois-Morand (son-in-law?). In the 18th century the porch was constructed to extend the chapel.

Detail of wall paintings in the side chapel: above, the story of the three living and the three dead; below, Christ carrying the cross. 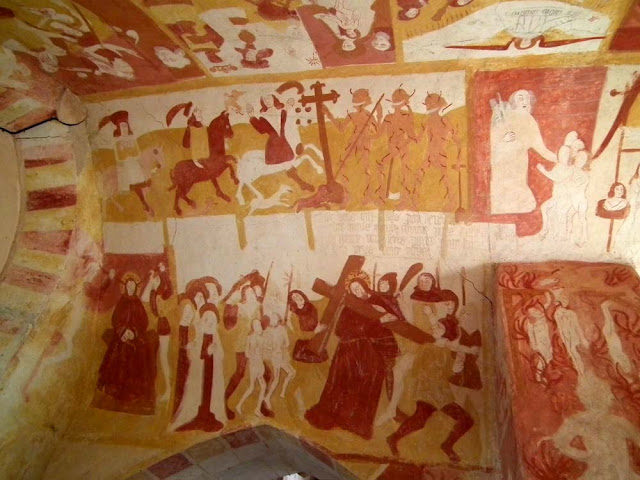 The chapel attached to the church at Antigny, the oratory at the chateau of Bois-Morand (privately owned and not open to the public) and the Chapel of Saint Catherine at Jouhet were all decorated at the end of the 15th century on the orders of Jean de Moussy. They depict the life of Jesus, the Last Judgement, the story of the three living and the three dead and Christ in Majesty.


An archer, a detail of a partly destroyed depiction of the martyrdom of Saint Sebastian. 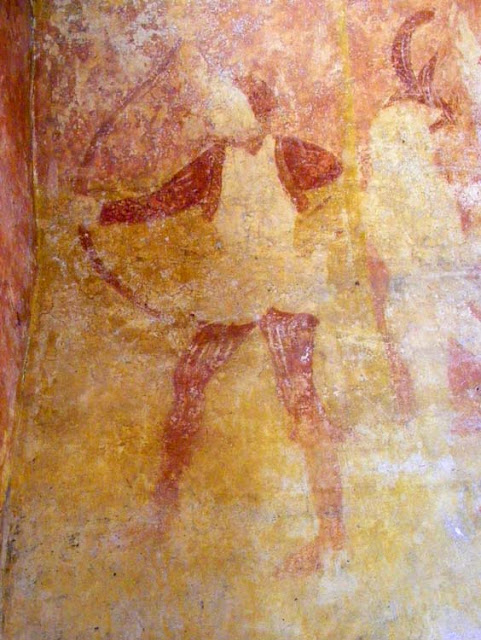 The Day of Judgement, with the dead rising from their coffins below, being assessed for entry into Heaven on the left by Abraham, assisted by the Archangel Michael weighing souls. There is some intriguing but not uncommon imagery in the centre. Mary is expressing milk and Christ bare chested, with a sword pointing at his head. John the Baptist is kneeling on the right. 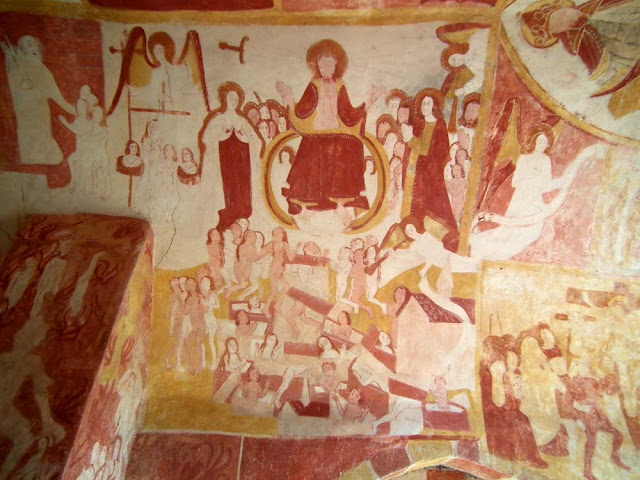 Some scenes from the life of Christ: top left, the shepherds receive the news of Christ's birth; top centre, the three magi visit the infant Christ; top right, the massacre of the innocents; bottom left, Judas betrays Christ to the soldiers with a kiss; bottom centre left, the seated figure is Christ and I think the figure behind him is Mary, but I'm not sure what story is being illustrated in this panel; bottom centre right, Christ on the cross; bottom right, Christ being held while Pontius Pilate washes his hands. 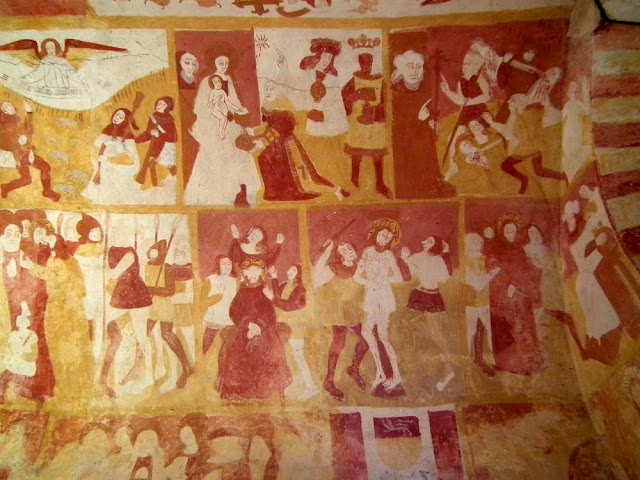 Christ in the tomb. I notice he has no genitalia, but the sword wound in his side is clearly shown. 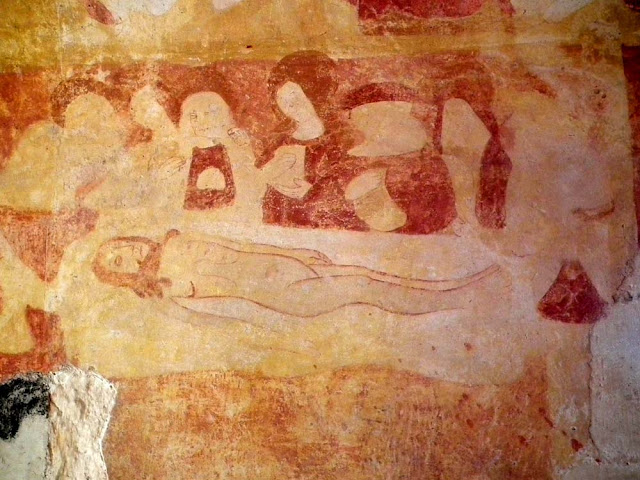 The last supper. The lamb on the central platter caused us some amusement. 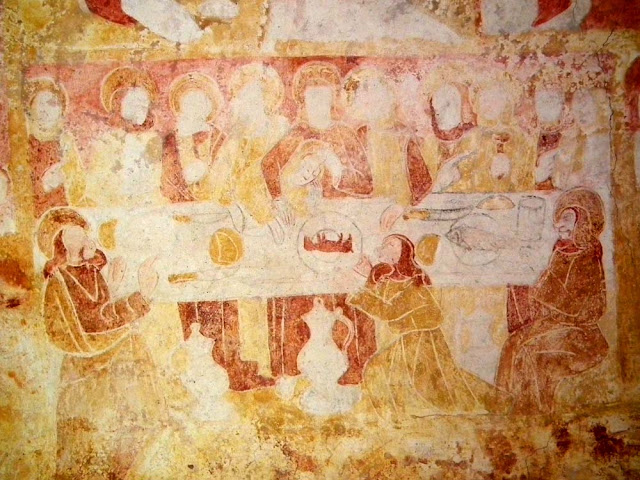 What is my recollection of the first time I saw this little church, seventy-six years ago, might not be accurate, but I think there were not as many paintings viewable at the time.

But what I clearly remember is the painter from the Musée des monuments français copying the paintings in the church of Saint-Savin.