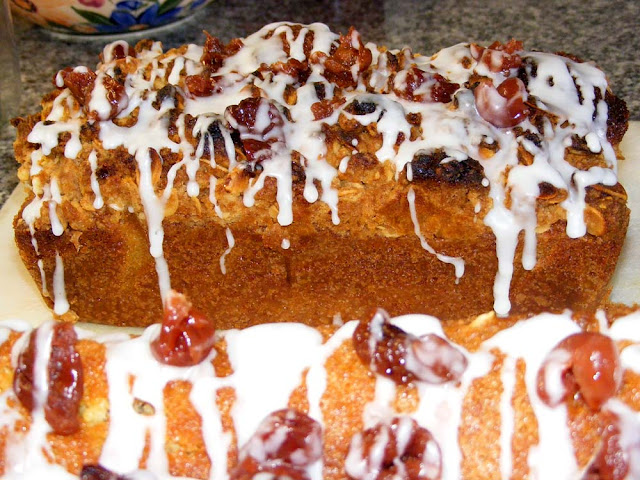 As regular readers may know, we belong to a cake club. Jane from Le Grand Pressigny also belongs and periodically she collars other cake club members and asks them to bake a cake for one of her charity events. Having put my name down on the list I then had to decide what to make.

Eventually I picked the Cherry and Almond Cake from the Clandestine Cake Club summer holiday baking challenge. I doubled the recipe to make two so we could keep one and one could go to Jane. Once the cakes were in the oven it was very clear which one would be given away. The streusel topping on one of the cakes sank without trace whilst the other one turned out perfectly. I think because our oven is so large it heats very unevenly, and the cakes must have been at different stages when the topping went on after 20 minutes of cooking.

Oh well...I decorated both of them with dribbly water icing and home made home grown pickled cherries. I thought the charity cake turned out rather well (and the one we kept was by no means inedible -- it just had a slightly odd conglomeration of almonds and crumble embedded in the centre of the cake).

Jane's English Tea Room raised €400 which will go towards funding community events in Le Grand Pressigny. She very kindly organised someone to collect my cake and bring back my cake box so I didn't have to take the time to go over to her house, which I appreciated.

What are the "pickled" cherries pickled in? The cake looks really good.

It's one of those universal things, wherever we have lived in the world, New Zealand, the USA, the U.K., France, I have always baked cakes for charity events!

I spotted this recipe and nearly made it myself for the do. Instead I made a version from a recipe book by Antony Worral Thompson which was, in my opinion, disappointing. Yours looks better!

I'm sure they were good.

It is a nice easy way to contribute something.

I thought it was a nice cake, even with sunken topping. I was very pleased with the way the cake that went off to the stall looked. So I would make it again, just making sure the cake had enough of a skin to support the topping when it went on.