At the end of August, when who knew how many more long and hot days we had, we were invited to dinner at Marie-José and Philippe's. We were warned it would be quelque chose d'un peu sauvage, which I took to mean extremely informal. It turned out to be éclade de moules, a dish I had seen prepared on the television but never encountered before in real life. Marie-José comes from the Ile d'Oléron just off the Atlantic coast, so she grew up with this dish in its native territory. I thought the mussels were delicious, with their smokey tang. Here is step by step of how it was done:

Step 1: Preparation
Scrub the mussels. Lay out on the ground in an open area of the garden the cast iron central disk from a sundial that you found years ago at an abandoned chateau. Cover it with a layer of fig and vine leaves. One by one select the mussels, debeard them and place carefully on the leaves. Start in the middle and work your way out concentrically. The mussels must be placed resting on one another slightly, straight side down so that when they open a bit with the cooking they don't get cinders inside them. Discard any broken mussels or any that are open and don't close when given a sharp tap, just as you would normally. 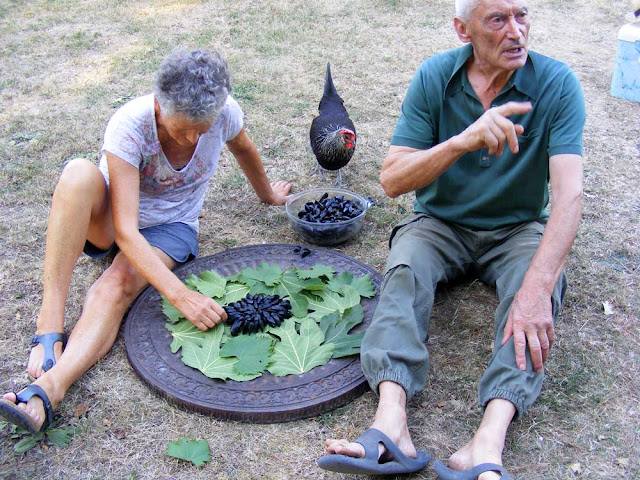 Step 2: Pine Needles
Cover the circle of mussels with a thick layer of dried pine needles that you have previously gathered from under the pine trees in the garden and stored in old dog kibble sacks. 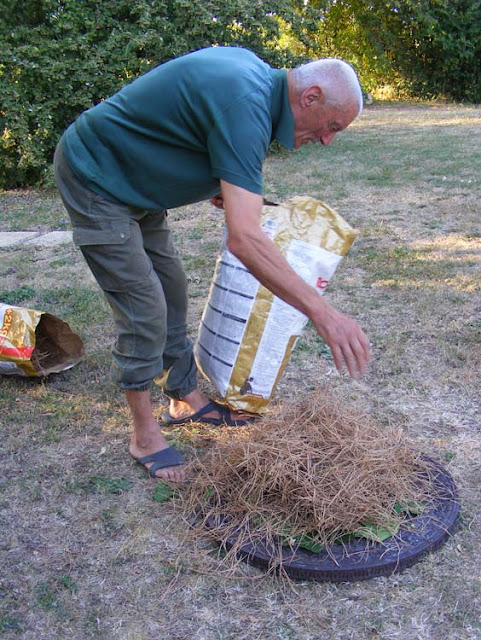 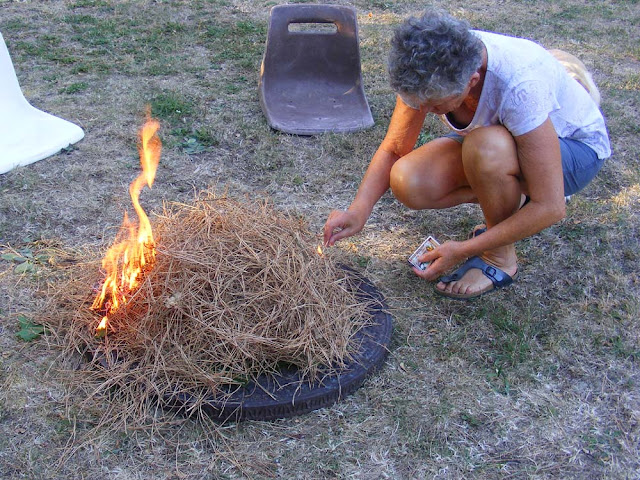 Step 4: Fan
Fan the mussels with a plastic stackable chair that has lost its legs to get rid of any remaining pine needles and as much of the cinders as possible. Try not to flap cinders onto your bare feet, the tablecloth or into people's drinks. 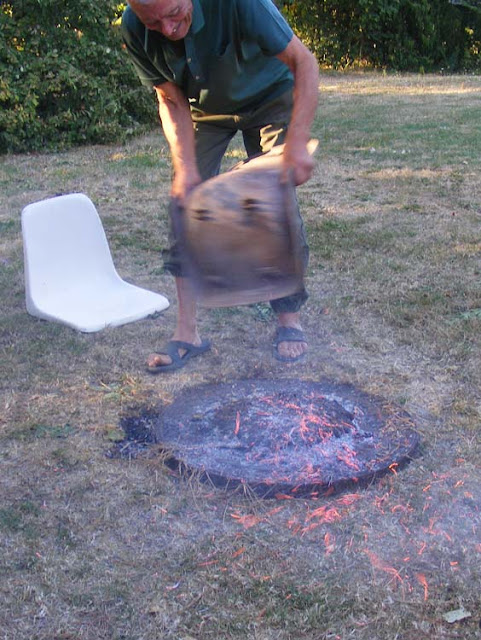 Step 5: Remove poultry
Encourage the chook to stop hanging around by bribing it with grain as necessary. The chook is the sole survivor of a fox attack on the chook house two years ago and she has attitude. 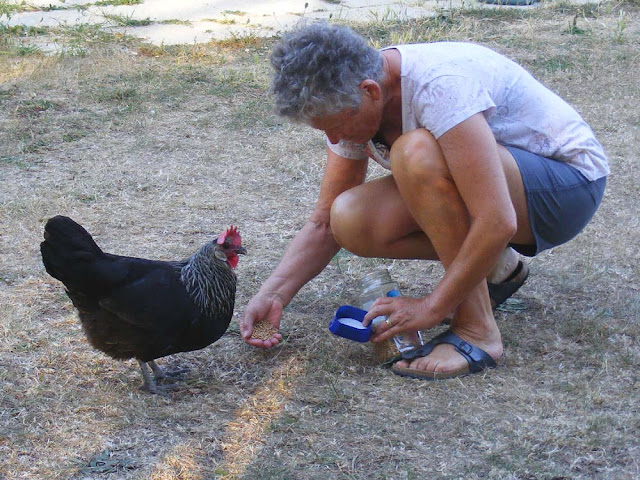 Step 6: Eat
Sit around the mussels and take one at a time. Extract them from their shell and eat. The shells will often slide apart sideways. Sometimes they will crumble, which results in you having to pick bits of fragile shell off your mussel before consuming. The mussels are eaten with buttered pieces of baguette. It's a messy business and your fingers get covered in soot. 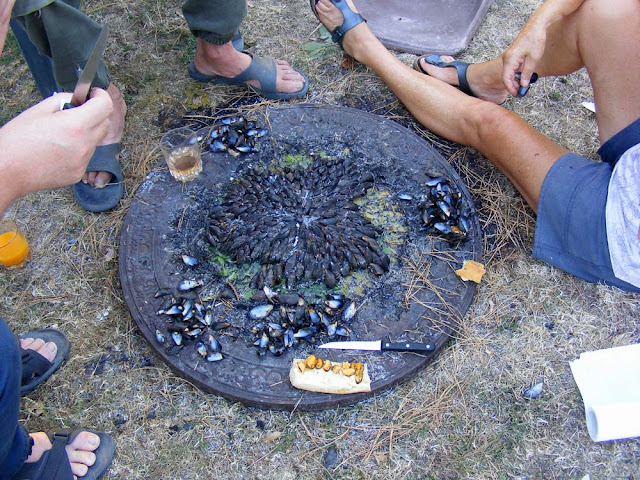 Once all the mussels are finished, lean back in your chair, relax and discuss such subjects as Wuthering Heights, the extent and depth of troglodyte caves under Preuilly and the shooting club at La Roche Posay. Eventually, get up and wash hands. The remains of the meal are swept up with a dustpan and brush and put in the rubbish. Dessert is served. 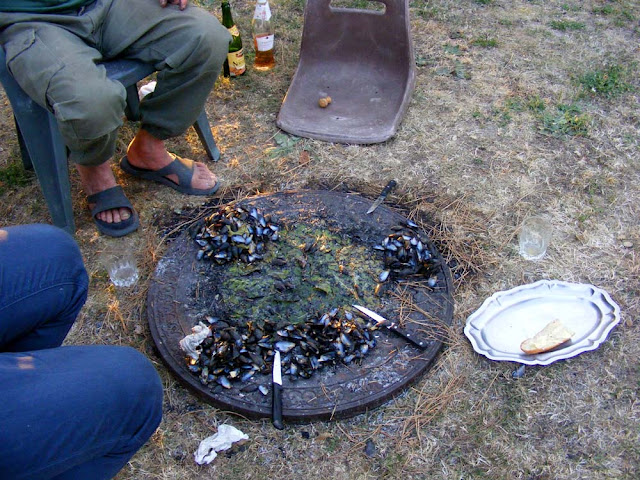 Step 8 Star Gaze
Sit until dark then look at the bats and stars for a while before your guests go home.

Further Reading: Quite by coincidence Susan from Our French Oasis discovered this method of cooking mussels and had them the same night as we did, at a seasonal restaurant close to where she lives in the Charente Maritime. There on the mainland the dish is called la terrée de moules.

We do something similar on the North Carolina coast using oysters instead of mussels.

I can imagine it would work well with oysters, and with clams too.

That looks wonderful.... but look out at your feet, as manhole covers vanish from around the area.... there being a well known shortage of sundails from old chateaux!

As you know we had these for the first time this summer and have been back for more! We have also introduced several of our guests to this style of cooking moules, just the best, eaten casually just as you ate them, my style of cooking!

But you are in France, Madame said...

Love the conviviality of the meal, but, from Australia, the thought of lighting a fire so close to the parched grass would worry me!

It just goes to show how long it is since I lived in Australia. The thought never even crossed my mind! I was more concerned about not getting cinders in my drink or on my feet.

But you are in France, Madame said...

Love it! You have become so French! I'm sure that it happened to us too when we were living there. Look forward to reading more of your story.