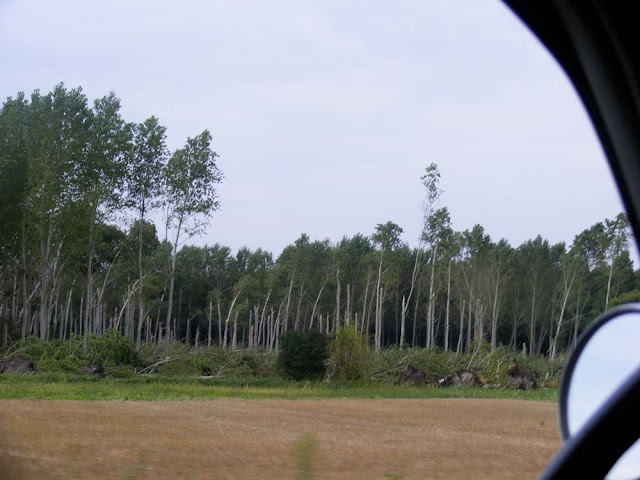 A couple of weeks ago (13 September) we had a violent wind storm that appeared out of nowhere at 10.30 pm one night. There was no rain with it, just howling winds for about half an hour. Then it was gone and the next day it rained a bit.

Driving between Chenonceau and Tours a few days later (19 September) we spotted this scene of devastation amongst the poplar plantations. Many of the trees had snapped off mid trunk and the wind here was reported to have been 100 kilometres an hour (and 104 km/h in Tours). 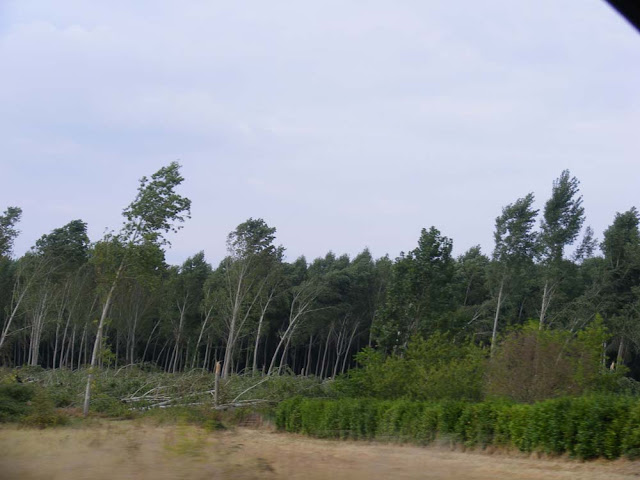 According to the local newspaper the storm hit Tours about an hour after us in Preuilly and caused some damage with fallen trees and branches. No one was hurt but the fire brigade was kept busy and traffic was slightly disrupted.

The fire brigade responded to 150 callouts for fallen trees and flying sheets of roofing material. 18 000 homes were without electricity for the night. In the morning 150 Enedis workers (formerly ERDF) were out reconnecting 30 medium tension electricty lines and by that evening had all but 4500 households restored to power. The train service was not disrupted.

Preuilly was not amongst the communities that were worst affected. At Luynes some businesses and the school stayed closed for the day. The arrival of the wind was so sudden that many people still had their windows open due to the heat of the day. At Sepmes, a large piece of masonry was lifted from the church and in through the open bedroom window of the house next door. Some poor bloke got the fright of his life when a branch slammed into his car on the drivers side windscreen pillar as he drove to work. At Tours Central Station work on the new foot bridge came to a halt. They had intended to put in place a large beam that night, but the crane they are using (the largest in France) cannot be used in winds higher than 50 kilometres per hour and their anemometer was registering 100 km/h. In Tours 34 trees were snapped off or uprooted and a statue in one of the public gardens damaged.

The weather bureau says the winds were caused by very warm air meeting wet air resulting in localised wind gusts. They were rather caught on the hop, not expecting such an extreme event, with the wind sweeping across the département from the west and departing to the north. They had issued an alert for the areas to the west of us, but had not predicted such strong gusts of wind over the whole of Indre et Loire.

After the seemingly endless and unchanging hot dry weather we'd had for the previous two months it was rather exciting to get some actual weather!

(PS The wind speeds were not sufficient for this to officially be a hurricane, but it was still fairly dramatic.)

Email ThisBlogThis!Share to TwitterShare to FacebookShare to Pinterest
Labels: nature and wildlife, Tours

We had it in Richelieu, fortunately it did no major damage only snap a few branches 30mm thick from the poplars. It did keep Elizabeth up listening to it...

We lost a couple of tiles. I think I might have had a lucky escape as about five minutes before I was outside moving the seating bench in order to close the shutters!

It was fun having a bit of real weather :-)

Simon went out to put up our sitting room shutter once it started and I was a bit worried by him going outside in it.