The Chapel of Saint Catherine, Jouhet

This 15th century funerary chapel is one of a series of painted churches along the Gartempe river. The most famous of these is the Abbey of Saint Savin, which we have visited several times. But we had never visited any of the others until recently.

The chapel is a rectangle about 6 metres long and 3 metres wide inside. It probably replaces a much older building, possibly 13th century but maybe Roman or even pre-Roman. The older building was possibly in ruins when in 1476 the local priest Pierre du Boschage raised the money to build the current building. His building was extremely modest, barrel vaulted and lit by two narrow windows in the apse. One enters by an arched doorway with an ogee shaped niche for a statue above.


Antoinette, me and Niall about to enter the chapel. 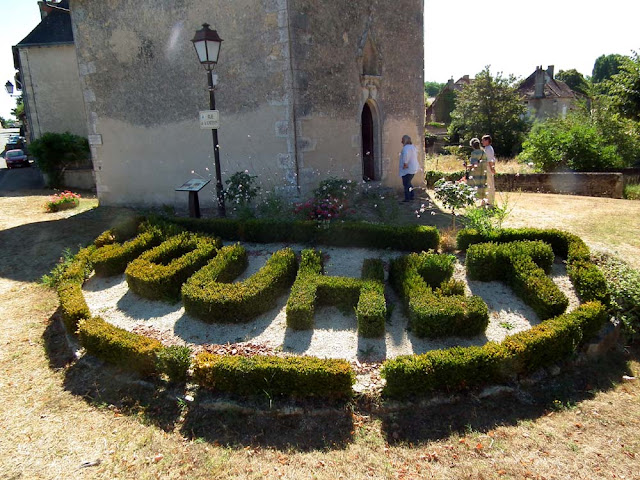 The wall paintings were commissioned by Jean de Moussy in 1502 when he was 70 years old. He indicated that he wished to be buried at Jouhet, and the paintings must therefore date to the early 16th century. He died in 1510 and he and later several other members of his family were buried here. In the 19th century it became the sepulchre for the Auboutet family, and there is a gravestone in the centre of the floor dedicated to a member of this family.

The chapel at Jouhet is related to the fabulous painted church at Antigny and the paintings there were also commissioned by Jean de Moussy. Several of the themes at Jouhet are the same as those at Antigny, such as the story of the three living and the three dead, Christ in majesty, and the last judgement. In addition there are panels showing the story of Adam and Eve and the birth of Jesus. Several of the painted stories run the full length of the north or south sides ie they are just under 6 metres long (in bands about 1.5 metres high). The paintings are underlined by a half-round moulding. Both walls are designed to be read like a cartoon from left to right. The iconography of the northern wall is dark and negative, that of the south, light, the story of the world saved and the second coming. Eve on the northern wall is offset by Mary on the southern wall. I think it is telling that it is the southern wall where the patrons have chosen to have themselves represented.


The sunny side: top left the bull of St Luke, top right souls emerging from their graves on the day of judgement; bottom left the annunciation, bottom centre left the nativity, bottom centre the adoration of the shepherds, bottom right the magi/kings, including the kneeling figure of Jean de Moussy (blackened). 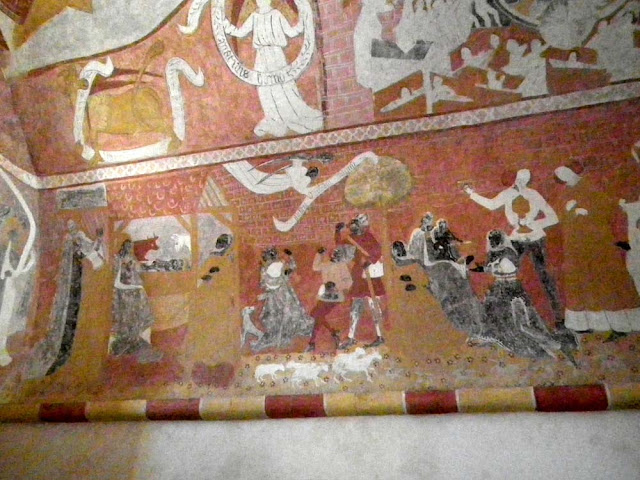 The paintings are in fairly good condition (having been conserved in 2005), although the writing on the scrolls (presumbably dialogue between the characters) is no longer legible and the ends of each story cycle have been damaged. However some elements are very clear, such as Christ on the cross. The colour palette is restrained -- yellow ochre, red, pink, white and blue black. The backgrounds range from flowery grass or cloth hangings in the lower levels to starry skies in the upper levels, with masonry in between. The level of detail in the flower strewn ground and the pointing of the masonry was only revealed after conservation. The blackening of certain faces can be explained by the presence of pigments containing metal salts, which react and change colour over time.

The painters would have been travelling professionals working up and down the valley of the Gartempe, hence the similarities between aspects of this chapel and the church at Antigny and the abbey at Saint Savin. The artists would certainly have known and referenced the earlier work at the Abbey and you can see resemblances in the Christ figures in both places.


The shady side: top left God creating Eve from Adam's rib, top centre Eve taking the apple from the serpent, top right the eagle of St John and the lion of St Mark; bottom left the three living, bottom centre Christ on the cross, bottom right the three dead. 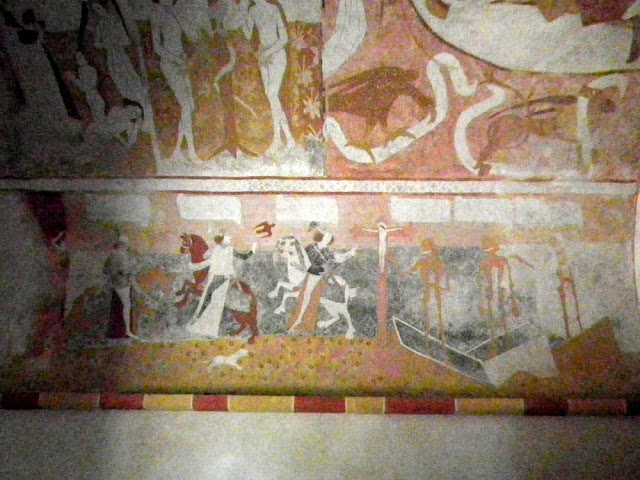 The chapel is kept locked and if you wish to visit it you must go up to the café about 100 metres away and ask for the key. Admission is a euro per person. Don't forget to return the key after your visit. The café is closed on Mondays.
Posted by Susan at 09:00

Wow... and this is just the start?

As a youngster, in 1940, I biked around St-Savin. I went to Antigny and Boismorand, but didn't go as far as Jouhet. Seing your photos, I certainly should have. Years later, I went back to Antigny with Ken and rediscovered the wall paintings. That's when I mentionned that humble church to Antoinette and Niall. I'm glad they finally were able to make it.

Yes. Antigny to come, then probably some themed posts on the different subject matter.

Antigny is just astonishing. Boismorand isn't open to the public so we haven't seen that.