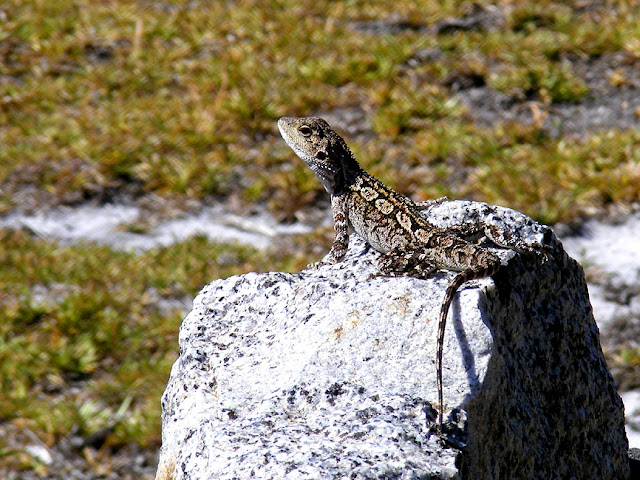 This is a Jacky Dragon Amphibolurus muricatus, photographed in New South Wales. Their most striking feature is a bright yellow interior to their mouth. The species was one of the first Australian reptiles to be described and given a scientific name, back in 1790. It is one of 70 species of dragon lizards from the family Agamidae to be found in Australia. They are about 23 cm long, with the tail making up two thirds of their length. They weigh about 30 grams and live on average about 4 years.

You see them in dry sclerophyll woodland and they are semi-arboreal. They like to sit on fallen timber, or as in this case, a rock. They eat insects such as flies, moths and caterpillars, and are in turn eaten by feral cats and kookaburras. The species is abundant.
Posted by Susan at 09:00

"schlerophyll"....?....
can we have a glossary in the side margin please, Susan!
Pretty proto-dinosaur tho'....
I like the pattern down the back.

'Sclerophyll' means a forest of tough plants (such as eucalypts and wattles) on poor soil. It is a very typical Australian habitat.