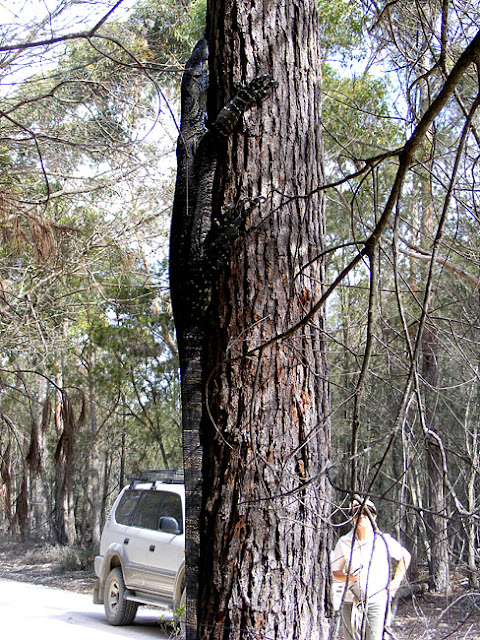 This is a magnificent Lace Monitor Varanus varius (Fr. Varan bigarré) about a metre and a half long and not very impressed to find itself surrounded by my family all clicking away. In Australia there are 25 species of monitor lizards, all of which are colloquially known as "goannas". Big goannas like this are the quintessential reptilians. I love them. 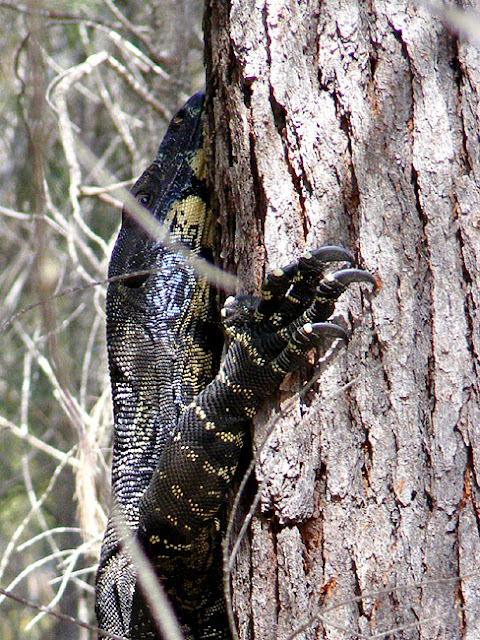 This species is endemic to Australia and can be found throughout the east and south-east of the country. They can grow to more than two metres long and their skin is covered with white spots and stripes. The tail is long and thin (like a lace, hence their English name) and is generally one and a half times the length of their body. It is the second largest lizard in Australia, and one of the largest lizards in the world.

Occasionally climbing trees, they are usually found in bushy or forested areas and can travel around three kilometres a day. They spend winter in a cool sheltered spot like a hollow tree, and are mostly seen out and about on goanna business between September and May.

Their diet consists of insects, invertebrates, other reptiles, small mammals, birds and birds' eggs. It was not until about ten years ago that scientists discovered that they are venomous - previously it was thought that any reaction to a goanna bite was due to microbial infection. They are a favourite traditional tucker for Aboriginal people and their fat is used medicinally and in certain ceremonies. The species was first scientifically described in 1790.

Our blog posts on Sundays have an Australian theme. To read more of them, click on the Australia label in the index on the right side bar.

That's one big lizard would be great to see one.

This one doesn't seem as menacing as his cousin the Komodo dragon!

Unfortunately none in the wild in Tassie...

No, no where near as menacing, but I'd still not get too close.