There is a well known tradition of slipping sly portraits of local characters and the sculptor's mates into medieval capitals and other decorative carving.

Every now and then modern sculptors working on historic buildings will join in the fun. There is a great example in the courtyard of Blois chateau. 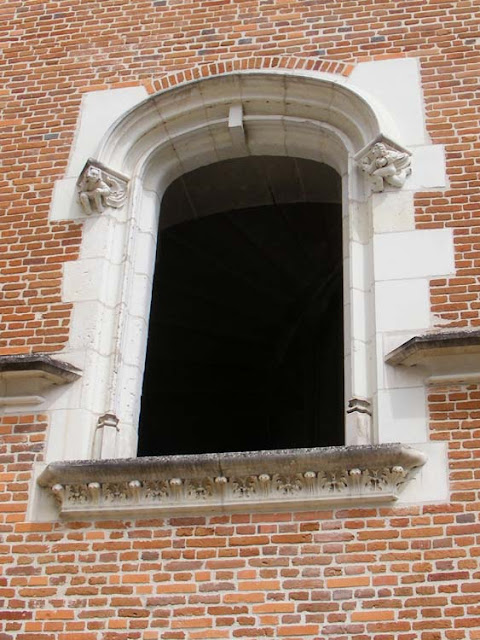 When the medieval tower which leads to the Louis XII wing of the chateau was restored in 1990 the master sculptors converted the bare bottomed character on the right hand socle of the first floor window into a very recognisable representation of Jack Lang, at that time Minister for Culture and the Mayor of Blois.

Jack Lang is one of France's most well known and popular politicians. (Australian readers are probably a bit confused by now, as Jack Lang is also the name of a well known and admired Australian politician from the 1920s.) Both are interesting egotistical Socialists who haven't always made decisions the people on their own side have been able to back. Nowadays the French one is the Director of the Institut du Monde Arabe and a member of the National Assembly. 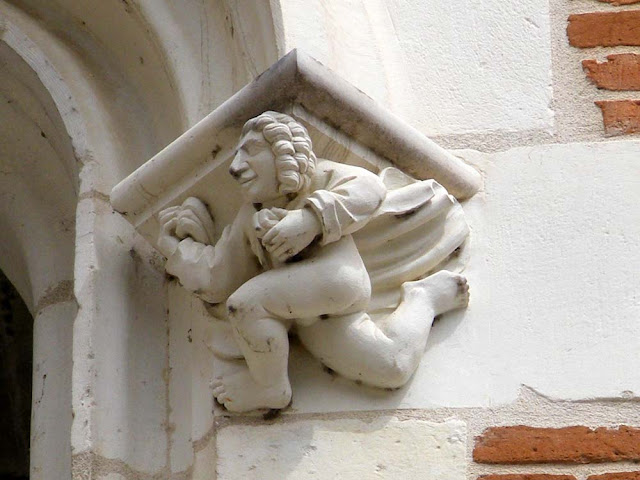 Opposite Jack on the other side of the window is a caricature of Martine Tissier de Mallerais, who after studying art history at the Sorbonne became the Director of the chateau in 1967, at the age of 27. She took on a chateau that had limited resources, and had not had a curator for twelve months. She had hardly any staff and no inventory of the clearly important collection. The locals weren't interested in the place although the tourists came. Her first tasks were to make the chateau relevant to the locals and to create an inventory. She formed a team of volunteers to make up for her lack of staff and got on with things. They even managed to purchase significant objects for the collection, sometimes acquired via the most incredible sequence of events.

But in 1989 Jack Lang became mayor of Blois. He was determined to replace those in charge of the cultural life of Blois and when in 1990 a post became available that allowed her to leave with dignity Martine left to become Curator of the chateaux of Fougères, Chaumont and Talcy. 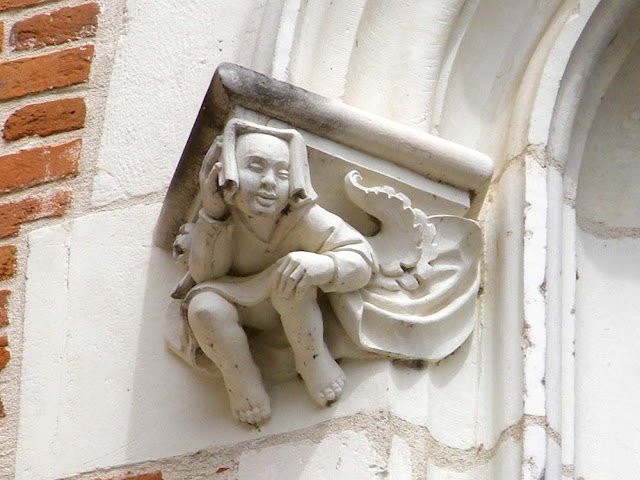 Martine and Jack apparently had incompatible ideas about how the chateau of Blois should be managed and presented to the public.

Many thanks to Rosemary from Loire Daily Photo for alerting me to this piece of modern history.

Loire Valley Nature: A photo has been added to the Fly Orchid Ophrys insectifera (Fr. Ophrys mouche) entry. It shows a male digger wasp attempting to mate with an orchid flower.

The present curator is Madame Latrémolière. She was very pleasant when I contacted her about my grandfather's Joan of Arc painting in the chapel.

Thanks, Susan, for the shout-out! Glad you caught up with them.