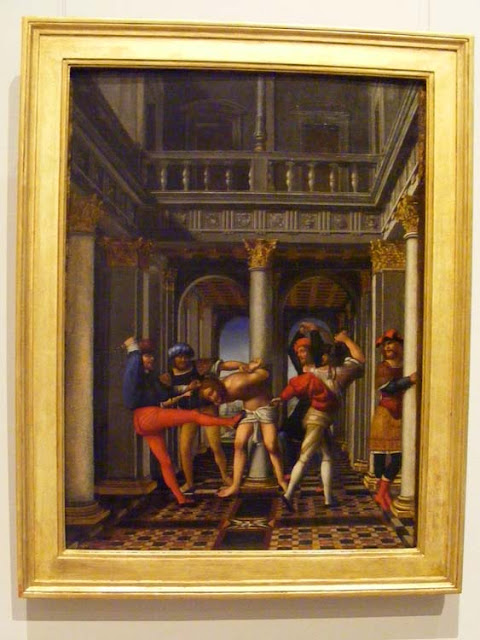 This painting by Bernard Zenale (or somebody in his sphere) depicts a flagellation. The painter and architect was born in the 1450s and died in Milan in 1526. The Flagellation dates from 1515-20 and is oil on wooden board. It hangs in the Castello Sforzesco in Milan.


He seems to have become a master painter and member of the guild of painters at a remarkably early age (maybe as young as 15, but certainly by the time he was 17). Although not originally from Milan, for most of his career he was based in the city. Leonardo's arrival in Milan was hugely influential and as a result Zenale's style changed markedly around 1500. By 1513 he was working primarily as an architect rather than a painter and was appointed to the Duomo project in 1519, becoming chief architect in 1522. You can see his architectural interests reflected in the painting above, and his use of perspective is skilled (he even wrote a paper on the subject). He appears to have been a wealthy individual, owning two houses and some land near Milan.

Our posts on Mondays are all about the northern Italian city of Milan. To read more click here.