Saints Dorothy and Lucy with one of the Faithful, by Girolamo Giovenone, 1508. 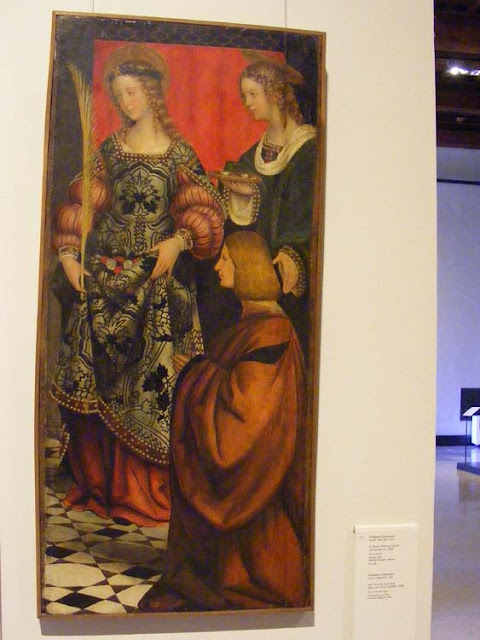 This painting hangs in the Castello Sforzesco in Milan. It is painted in oil on a wooden panel and is the right hand side (as you look at the work) of a triptych for above an altar. The central panel would have been a Madonna and Child and the left hand panel a mirror of this one, more or less, with two other saints and another one of the Faithful.

The artist was born in Vercelli (Piemonte) in the late 1480's, died in 1555 and worked mainly in Milan. He was the tutor of several other known artists and several members of his family with similar names were artists. Consequently he is often referred to as Girolamo Giovenone the Elder.

Saint Lucy, on the right, is holding a pair of eyes on a tray. Lucy, or more properly, Lucia, means light, and as a consequence she became the focus of prayers for the cure of eye diseases and is the patron saint of the blind. According to medieval versions of the story of her 4th century martyrdom her eyes were gouged out before she was killed.

Saint Dorothy holds a palm frond, a sign of her martyrdom, and pulls her magnificent dress into a pouch to hold apples and flowers. At the moment of her execution her headress was transformed into a garland of roses and fruit. She is the patron saint of gardeners.

For our other posts about Milan see here.
Posted by Susan at 09:00