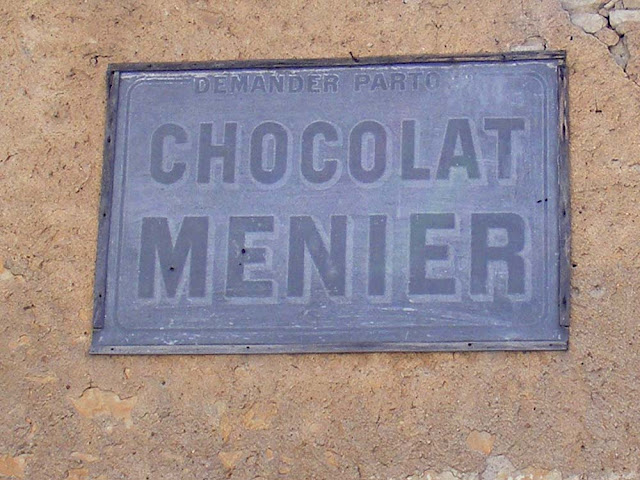 Five generations of the Menier family built an empire from the first blocks of chocolate between the July Monarchy of Louis Philippe to the beginning of Charles de Gaulle's Fifth Republic. Now the company is owned by Nestlé and the Menier family run the Chateau of Chenonceau, but in 1893 Chocolat Menier was the leading chocolate manufacturer in the world.

Appreciated by a social elite from the 17th century and made famous by the Marquise de Sévigné chocolate was consumed as a drink and as luxury confectionary. But it was mainly manufactured in laboratories and used to disguise the bitterness of certain medications. In 1836 the manufacture of the first block (Fr. tablette) of chocolate would revolutionise consumption habits.

Jean-Antoine-Brutus Menier, founder of the family dynasty, was a real pioneer in the chocolate business. He invented the block of chocolate in the form of six semi-cylindrical bars. He also invented the famous yellow paper wrapper used by the Chocolat Menier company. His background was as a manufacturer of pharmaceutical powders but ten years earlier he had bought an old flour mill on the Marne at Noisel. For a while the production of chocolate took second place to the pharmaceutical powders because supplies of sugar and cacao were unreliable. By the time of his death in 1853 the factory was producing 4 tonnes of chocolate a year.

His 27 year old son Emile-Justin inherited the business and would take it forward to an era of mass production and consumption. In 1863 he abandonced the manufacture of pharmaceuticals and concentrated exclusively on chocolate. In 1856 he had 50 workers. By 1874 there were 2000. Aided by his mechanic who designed new machines he achieved new standards of product uniformity, hygiene and security.

The mill was rebuilt as a factory on rational lines designed by Stephen Sauvestre, the architect of the Eiffel Tower. Chocolat Menier was also a pioneering multinational, an early example of a fully integrated business controlling the entire supply chain, from the harvest of the cacao to the distribution of the blocks of chocolate to the stores. The company's cacao plantations were in Nicaragua and the cocao beans shipped to France on company owned ships. Likewise they owned a sugar refinery in the north of France.
Posted by Susan at 09:00

Email ThisBlogThis!Share to TwitterShare to FacebookShare to Pinterest
Labels: Food and Drink, Ghost Signs, the Brenne

Interesting history... BUT what was on the plate two days ago... It certainly wasn't chocolate!!

The Menier family is to be commended for what it does for Chenonceau and French rayonnement culturelabroad.

And their London factory - or one bearing their name - is now a theatre.

I'll try to remember to look out for Debauve et Gallais. Thanks for the link.

fascinating. I had no idea.
As someone who grew up with nothing more sophisticated available than Hersey bars, I am still intrigued by new sources.