A Copy of a Copy 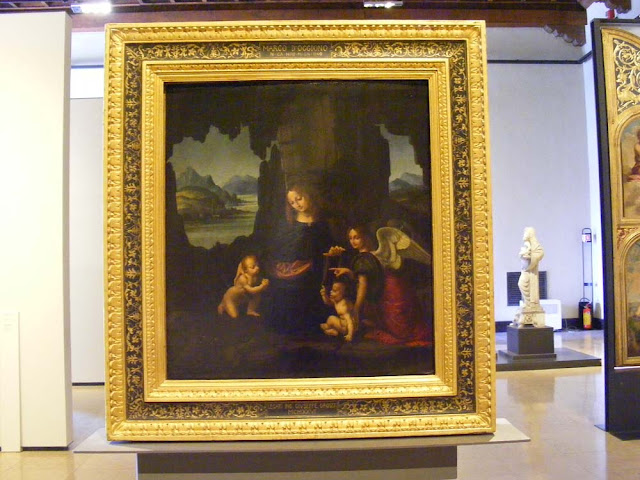 This painting will look familiar to many readers, especially if they are familiar with the works of Leonardo da Vinci in the Louvre and the National Gallery in London. This is a copy by Marco d'Oggiono of Leonardo's Virgin of the Rock (London version) painted in 1510. Marco was a skilled jobbing painter who had a successful career painting all the usual suspects. There is considerable debate about his dates, but he may have been born in a village near Milan c.1467 and may have died in 1524 (or possibly 1549...). His father was a well regarded goldsmith. Marco is believed to have died of the plague. (Given the number his associates who died of the plague I am amazed that Leonardo managed to make it to die in Amboise of old age...)

Sometime in his early twenties Marco met and began working with Leonardo or with his workshop. By his early thirties he had established his own independent workshop. His approach was to repeat successful or popular subjects again and again, and he produced many copies of Leonardo's work. This painting hangs in the Castello Sforzesco in Milan. It is tempera and oil on a wooden panel.


The back of the painting. 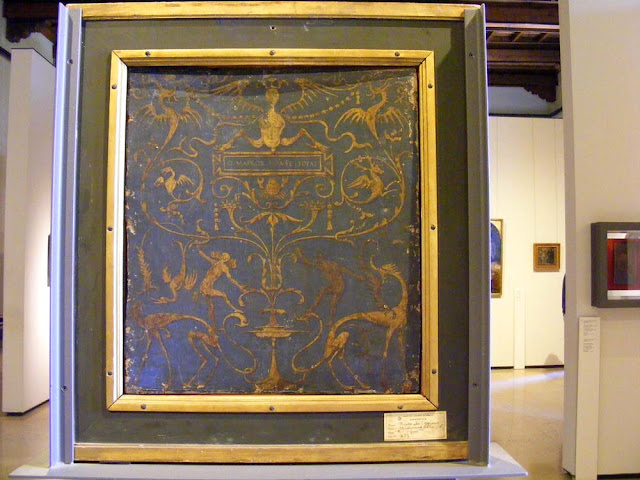 Our posts on Mondays are all about the northern Italian city of Milan. To read more click here.

Law and Order: Strikes and blockades at several fuel refineries have lead to shortages all over France. Yesterday when I stopped off to buy fuel in Descartes neither supermarket service station was operating and the refuelling bays were roped off, with signs saying they would reopen today. The closures are presumably to stop people panic buying and filling up jerrycans. The service stations would normally operate as self-service on the weekends, but there are concerns that unsupervised people will take more than their fair share of fuel.

Prior to my attempt to buy fuel I witnessed what I assume was an asparagus thief being nicked. As I drove along the road between Pouzay and Nouâtre I saw a police car intercepting another car on a farm track in the middle of some asparagus fields. I've not heard of asparagus rustling before, but I would not be surprised that someone attempted it on a quiet Sunday in the middle of nowhere, and most years I hear about some sort of vegetable larceny. I'd be interested to know how the police happened to be there. Did the asparagus farmer call them?  Did the police just happen to be passing? Do the police patrol the asparagus patches during the season? (This last seems the most likely to me.)

There are many patches of asparagus around us and you often see people harvesting it... We wouldn't know whether this was the ownwers or someone just helping themselves...

That kind of theft is evidently a problem in the oyster beds down around the Ile d'Oléron.

I reckon the fact that it was late afternoon/early evening on a rainy Sunday might have been suspicious. Nobody else was out in other asparagus fields along my route.

I can imagine. The beaches where the oysters are raised are public spaces. People come and go all the time. Even if you are carrying oysters it's not suspicious because the public is allowed to harvest for personal consumption above the high tide mark or somesuch rule.