Martizay is the first village in the Brenne that we come to if we follow the River Claise upstream (to the east). Every year on May 2 they have a Goose Fair. Most years there are goslings for sale and people genuinely come to buy them. But it's a big fair, full of all sorts of stalls, many of them locals who are earning a living in the Brenne countryside in unexpected ways. This year I spoke to an man who is growing Elephant Grass so he can harvest it and sell as a mulch for gardens and as bedding for animals.


Carp being cut into strips known as goujons. 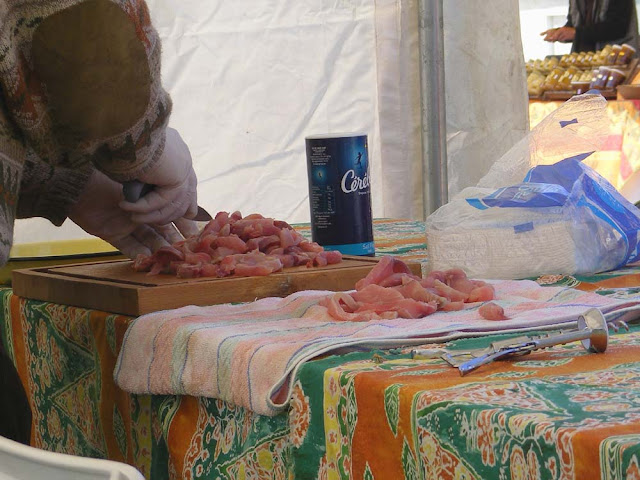 One local group were offering goujons of carp with chips for lunch. Yum! we thought and after a very pleasant apéro with friends Chris and Sue, joined by Chris bis (who is a blog reader we've met in the Brenne before) and a whole group of local Anglos that we had never met before we made a beeline for the carp tent. 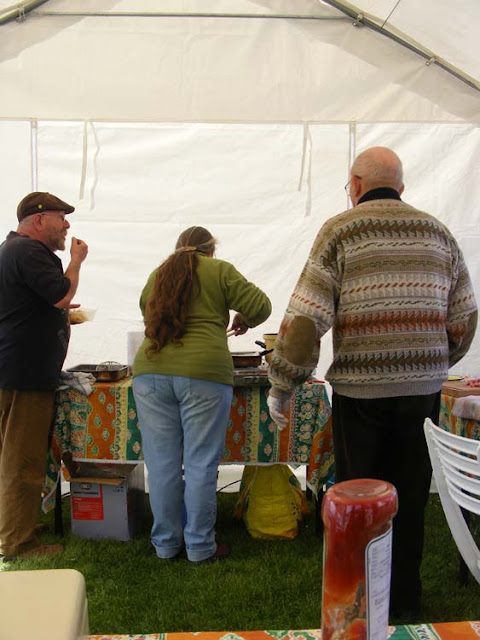 The carp came from a fish farm at Pouligny Saint Pierre. It came in strips in vacpacked fillets which were battered and deep fried by the team in the tent. Although carp does not have a very good reputation in the Anglo world, here it is considered good eating. You do need to know how to prepare it though and it is one of those foods that I don't bother doing at home, but will jump at the chance to eat it at a restaurant.


Not our lunch. We ate ours before I remembered to photograph it.
I had to interupt Chris and Sue's lunch to get this photo. 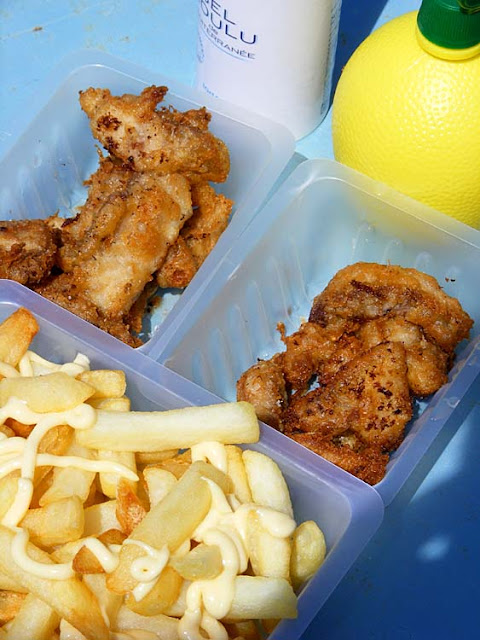 However, because I showed an interest I was given the batter recipe: 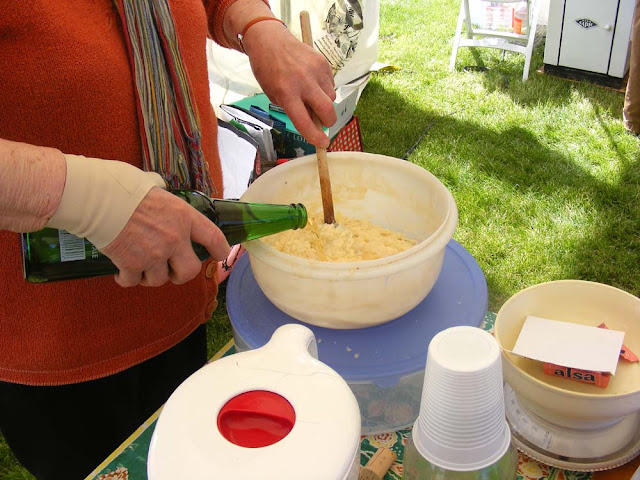 The fish is not native to this area. It arrived in the Middle Ages when Benedictine monks realised there was a business opportunity to be taken advantage of. Around half the days of the year it was forbidden for Christians to eat meat so anyone who could keep up a reliable supply of fish would get very wealthy. The Benedictines set about making fishponds all over the place. The fish, European Carp, were imported from Eastern Europe, and they thrived. As a result the Benedictines became great hydro-engineers and, as predicted, extremely wealthy.

I wrote about the history and management of the étang at Le Louroux in 2010. It is the largest hand dug fishpond in Europe.

Email ThisBlogThis!Share to TwitterShare to FacebookShare to Pinterest
Labels: Events, Food and Drink, the Brenne

We don't really know for sure, yet, what was on the plate on Wednesday's post!

Wednesday's post has been updated with the answers to the quiz now. Thank you for your continuing interest :-) I've been off with clients for the past three days, so no time and dodgy internet connection meant no update.

That you've been off with clients is really good news. Keep my fingers crossed for more coming!

Fish in beer batter - yum! The pictures of lunch are mouthwatering. Bangladesh is full of fish but not of beer, sadly. I knew I'd come across the term goujons before - it's finger food and applies to sole, chicken etc.

Carpe frites....wooohoo, my favourite from any Brenne visit!!

I think in America we would just call them fish sticks. And it's a funny word in Br.Eng., because it's a borrowing from French, and the tern goujon in French is the name of a small river fish, which is usually cooked as friture — the way what you show here is cooked. The French word for Br.Eng. goujons is goujonnettes!

Thanks Ken. After yours and Louisette's comments I've got my head around the goujon/goujonnettes issue. From my reading of American cooking blogs I would have identified a fish stick as what I would call a fish finger ie minced fish reconstituted into a bar and crumbed, frozen, usually fed to children and the subject of much food snobbery.