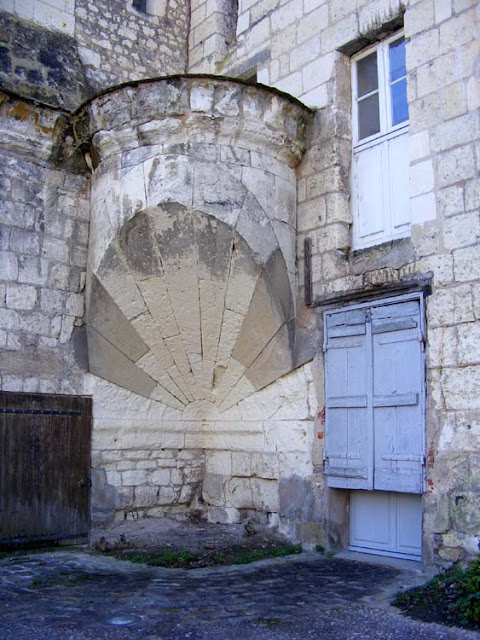 Betcha don't know what this is.

I didn't. I was confident it was a fancy well cover, but I was wrong. It's not a truncated lookout tower either.

It is early 18th century, on the front of the former priory at Beaulieu-lès-Loches. It is apparently, according to the ever useful Compagnonnage (Artisans Guilds) website, an architectural structure called une trompe ('a trunk'), and a very beautiful one at that.

It seems to have been a sort of outdoor pulpit for the prior, as well as providing internal access to the upper floor of the priory. The technical term in English for its pulpit function is a 'tribune'. In French this architectural feature is often referred to as une trompe de Montpellier, and for those of you who read French there is a nerdy discussion of what the specification for une trompe de Montpellier is and whether this structure fits the description (read the comments). There is also an interesting link to some similar structures known as coquilles ('shells').

It has been 'restored' in the past using cement, which hasn't done it any favours, and it isn't currently in particularly good condition. The soft limestone (tuffeau) has suffered over the years just with the action of the weather upon it.

Thistrompe is beautifully done. Hope it will be restored.

This type of masonry is most often used to go from a square plan to a circular one.

This outdoor pulpit or tribune made me think of one on the front of the church at Saint-Martin-le-Beau, not far from château de la Bourdaisière near Tours. It is a very simple tribune, not as sophisticated as the one here. I have seen many churches, but never seen such a structure on the outside of a church. I'm emailing two or three photos of it if you're interested.

Many thanks for the photos. I wonder if the steps on the outside of the churh at Savonnieres, just down the road from Saint Martin le Beau also once connected to a tribune? I've always assumed they were a mounting block, but maybe they aren't. We've never stopped at the church at SMlB so I've never noticed this more simple tribune. The one in Beaulieu is perhaps interesting because it is not on the church, but on the prior's residence.

BTW, did you hear about the fire at the church of SMlB? Arsen. It has just been announced that repairs are due to start, but it has lost it's entire roof. I don't know what the damage inside is like.

Yes. After posting my comment, I googled SMlB and saw the damage done bt arsonists. Pity.

P.S. I took the photos of Saint-Martin-le-Beau almost ten years ago when Ken and I went to visit La Bourdaisière.

PP.SS. Susan, here are links in French about external tribunes (chaires extérieures) that may be of interest to you:
http://sauvegardeartfrancais.fr/photos_realisations/Saint-Martin-le-Beau-C14.pdf

Thanks for these links. The one at Vitré is fancy! I was interested in the comment about that one that it was an example of ligerienne architecture fashionable at the time in Bretagne. Also I was amused by the idea of the Catholics and Huguenots preaching at one another outdoors.

Now I have said that, someone will do it. Sorry...