The small town of Bléré sits on the left bank of the Cher, to the east of Tours. In a park in the middle of town there is a funerary chapel. It's there because the park was once a cemetery, that was closed in 1840. This small solitary building is a rare example of its type, constructed in 1526 in the style fashionable in the Touraine in the early Renaissance. 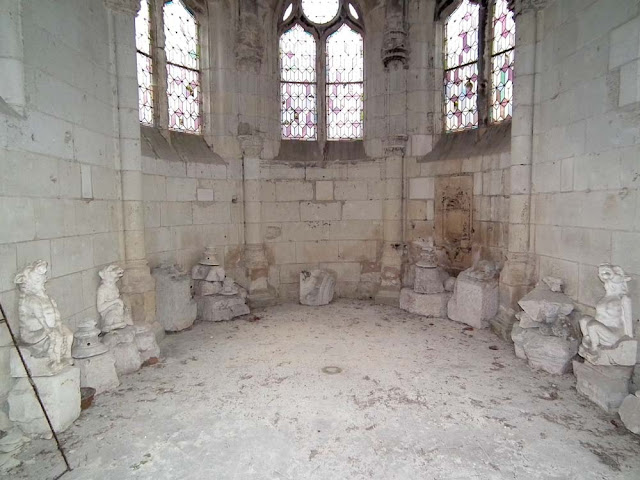 Guillaume de Seigné was the Lord of la Lande, Boispateau and Bois-Ramé, Governor of Montrichard, as well as Treasurer General of the Royal Artillery between 1518 and 1526. In 1515 he participated in the victorious battle at Marignano near Milan with his new King, the 21 year old François I. In 1520 he was responsible for the manufacture and transportation of the tents and pavillions for the famous Field of the Cloth of Gold gathering, where Henry VIII of England and François I met, embraced and proclaimed their enduring friendship, jousted, danced and schmoozed their opposite number's Queen, all with very few long-term results. 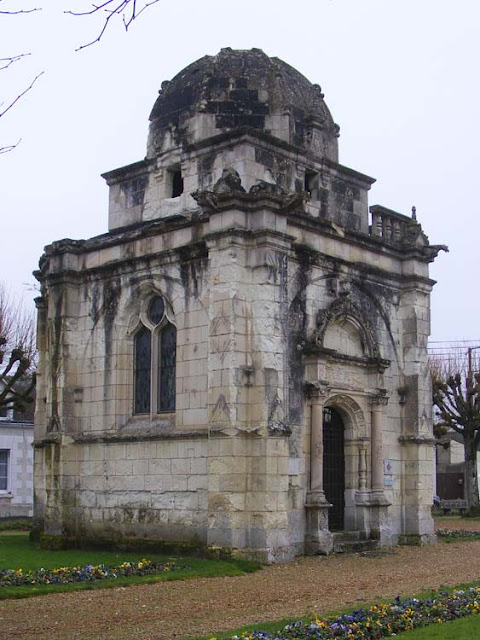 The chapel was probably begun by Guillaume, but we know it was finished by his son Jehan in honour of his father. The building is a cube with a polygonal apse and topped by an octagonal stone cupola resting on a plinth. Originally it had a lantern at the very top, finishing the cupola. The robust classical entablature still has some elements of a balustrade and gargoyles. The treatment of the three facades is equally robust. There are hints at triumphal arches and the corners are buttressed so they appear thrusting and accentuated. The door opens under a basket handle vault that joins two columns and is topped by an architrave with foliage, military paraphenalia and a curved pediment. The windows are a hybrid of two styles. The vaulted interior of the chapel is Flamboyant Gothic, with capitals and Renaissance style niches. Today there is no trace of a tomb or the original furnishings.

The style of ornament, consisting of diamonds, candelabra and scrolls, is typical of the early Renaissance. The military paraphenalia (cannons and flaming grenades) refer to the career of the deceased. The elegance and refinement with which the motifs are carved suggests an Italian artist was responsible for the work.

Last year an association called Les amis de la Chapelle Jehan de Seigne was formed to raise money to restore the building. Donations to the fund can be made via the Fondation du Patrimoine website. They are aiming to raise over €700 000 through donations and grants and have the total support of their local council.

In 1913 the chapel was in a poor state, damaged and with the lantern already gone. A restoration project was started, only to be halted by the outbreak of the First World War. Since then it has had no major work done on it. The Friends of the Chapel association and the local council plans to do the restoration in four phases: first the upper parts, costing €300 000; then the western facade (the front of the building), €150 000; then the apse, €100 000 and finally the interior, €150 000. The direction régionale des Affaires culturelles (DRAC) will provide 40% of the funding, the Region Centre Val de Loire 20% and the Conseil Géneral d'Indre et Loire 15%. That leaves €175 000 for the Friends and the council to find from beneficiaries, corporate sponsorship and a subscription. The council has promised €50 000 per year (1% of their operating budget) over the life of the project, if possible as a sort of bridging finance, so the amount which needs to be actively raised from small individual donations seems much more realistic.

Au jardin hier: Wild grape hyacinths, wild violets and wild pansies are out in the grass and vegetable beds. The apricot is showing a bit of pink in its buds, but not out yet.Yellow crocuses have been replaced by purple ones.
Posted by Susan at 09:00

Funding is theoretically in place (as in the architectural survey has been done, DRAC, Fondation de Patrimoine and Sauvegarde les Arts Francais have promised funds) and the project could start if our local council gives the word. And therein lies the problem, as far as I can see. I'm attending a meeting this evening where the chapel is on the agenda. Antoinette is doing a presentation in late May to the Association des Danses Macabres at their annual conference, which is in Troyes this year. That's to raise the profile of the chapel, and I've been contacted by someone who we've spoken to about the possibility of making a television documentary, but it is extremely early days for that project. In short, the news all sounds good, but there is a frustrating lack of action.

PS I should add that any funding that has been promised is entirely due to the hard work and persistence of Bernard de la Motte.

Keeping my fingers crossed! Congrats to you, Antoinette and M. de la Motte. Hope the local council will get moving after tonight's meeting.