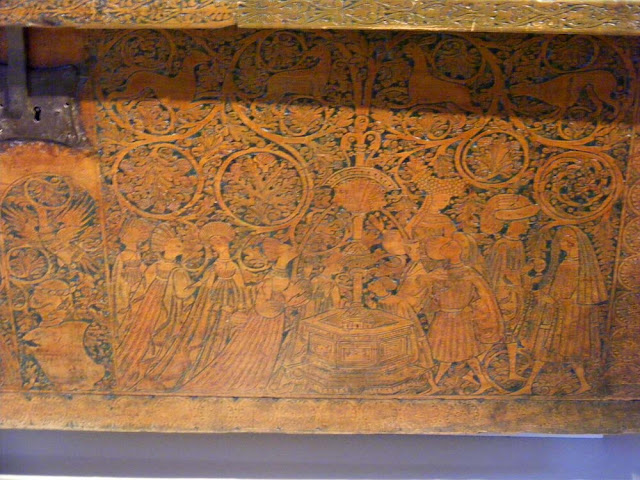 The photo above shows a detail of the champlevé decoration on the front of a cassone (chest). Chests like this were often painted, but when unpainted were decorated with intaglio (ie part of the wood was carved away to reveal a low relief decorative scheme). Sometimes sections of the raised decoration were built up with a paste and gilded. On the one above, the background has been filled with a dark green paste, in order to make the bright colour of the natural wood stand out in the raised parts. The scene shows people gathered around the Fountain of Life. The technique and the decorative motifs such as the animals in foliage volutes indicate a Northern European taste that was fashionable in Milan at the time. Because they were so decorative many of these chests (or at least, their decorated front panel) survive. 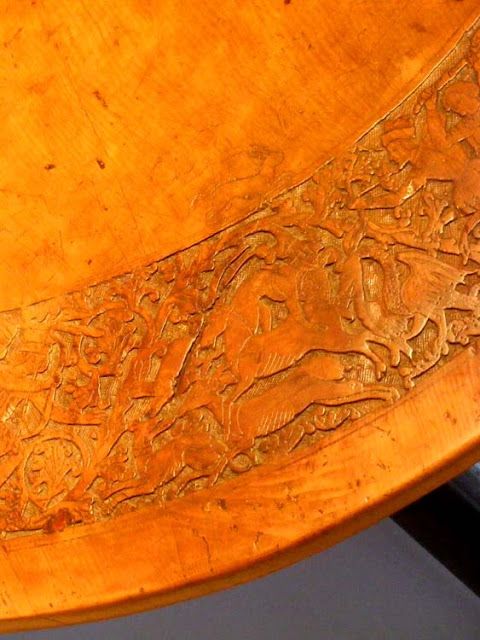 The photo above shows a detail of a champlevé decorated table top displayed in the Castello Sforzesco in Milan. The top is engraved around the margin with various scenes from the popular romances of the day -- the Stag Hunt, the Fountain of Love, the Legend of Tristan and Isolde and the Judgement of Paris. This section must be part of the Stag Hunt.

These romances functioned at one level as popular entertainment for the aristocratic households, but they are also moral tales. Today the most well known is Tristan and Isolde, which for modern audiences is a fairly straightforward tragic love story, with a beautiful young doomed heroine forced into a distateful marriage with a much older man, a handsome young doomed hero forced to watch his beloved in a loveless marriage, and a ruthless old villian who cares nothing for any of this. On the other hand, for medieval audiences, Tristan and Isolde are more like tragic anti-heroes. The medieval audience recognised the tragedy, to be sure. They acknowledged that the love affair was fate and that neither character could help themselves, but the story also carries a strong and darker message about how selfish they were and how much they hurt the people around them by their uncontrollable urge to be together. In other words, King Mark is not necessarily the villian of the piece, and Tristan, by his desperate marriage to the other Isolde, does not come out of it very well.

What amazing skill those woodcarvers had to fashion such intricate detail and then apply the green paste or gilding, to achieve whichever finish the piece required. How I envy them their patience...