Hanging from the Ceiling

Can you spot the Lesser Horseshoe Bat snoozing amongst the stalagctites? 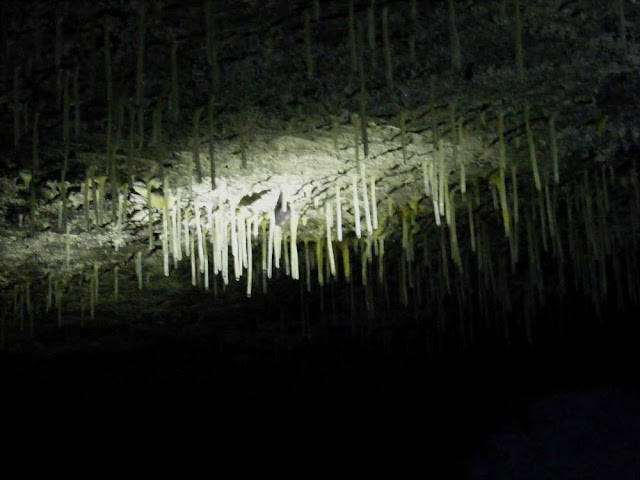 In the cellars of the chateau de Cingé we saw 15 individuals.


Stalagmites forming on the floor of a cave under the houses
along rue des pavillons, Preuilly sur Claise. 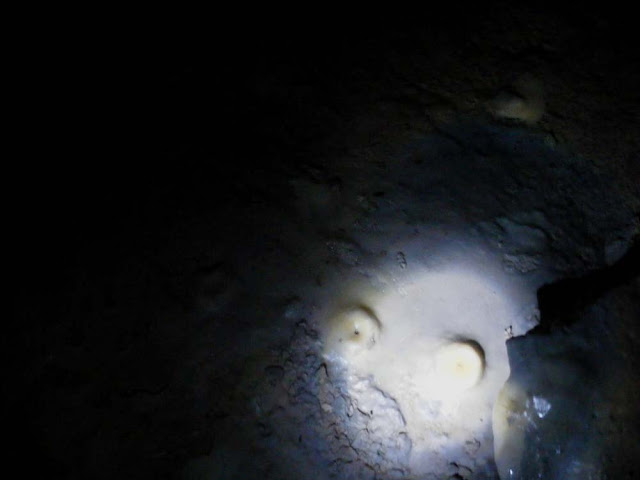 In the abandoned limestone quarries of Preuilly sur Claise we saw 22 individuals, comprising: 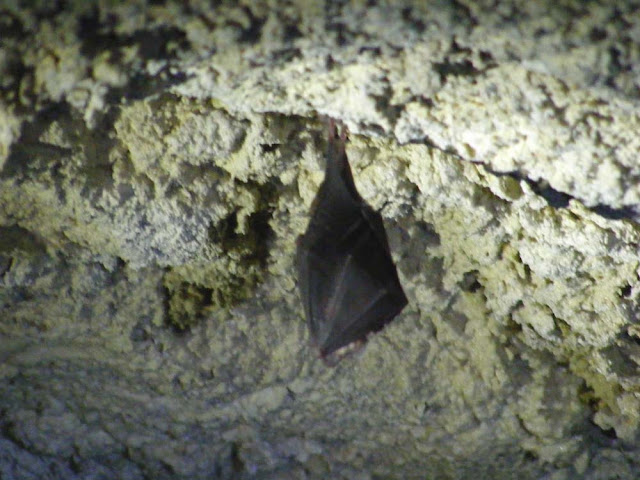 Because we were encountering so many horseshoe bats we had to try to move through the caves quickly and quietly whilst not missing any bats hiding away in crevices. The horseshoe species are especially susceptible to disturbance and wake from their torpor relatively easily. For this reason I have very few photos, and none taken with flash, so the quality is poor. If the bats wake up to the extent that they are alert and / or fly they expend a lot of valuable energy. It could mean they don't have sufficient reserves to make it through the winter, and the smaller the bat the worse this problem could be. Lesser Horseshoe Bats are very small indeed and need a particularly good fat reserve because they tend to hibernate longer than other similar sized small bats. We found horseshoe bats in several surprising places, such as in amongst the stalagctites (photo above) and hanging from a rock in a side gallery, less than 20 cm from the floor of the cave.

Email ThisBlogThis!Share to TwitterShare to FacebookShare to Pinterest
Labels: nature and wildlife, Pictures of Preuilly, Winter

I have always been baffled by the discrepancy in spelling between stalagmite and stalactite, taking it for granted without going any further until this morning. My query was rewarded with an American blog on the English language: http://verbmall.blogspot.com, where it is very clearly explained.

Further, about the groups CT and GM, it says : "The spelling discrepancies have led to a mnemonic: the C in stalactite stands for ceiling; the G in stalagmite stands for ground." In French, the T stands for tomber and the M for monter.

You learn something new every day... until you die!

Ahem...as you can see from the blog, I hadn't picked up there was a spelling difference. I always use the mnemonic 'the mites look up the tites' to remember which is which.

Many moons ago teacher said "stalactites hold tight, stalagmites might grow up to reach them" It is interesting to see other alternatives.

Wearing my new multifocals, I remain unable to spot the bat. No doubt looking at it from the wrong angle!

It is teeny weeny. It is the dark vaguely diamond shaped thing amongst the stalactites on the right hand edge of the brightest torch light. The bat's shadow is the dark mark to the left, at a 45 degree angle.

I learnt "hold on tight going downhill and pedal with all your might going up"!