Lichens on the Puy Besnard (Chinon)

The Puy Besnard, a dry limestone ridge near Chinon, is a nature reserve run by the Regional Nature Conservancy that the Association de Botanique et de Mycologie de Sainte Maure de Touraine visits at least once a year. This year it was on Sunday 13 March and it was to look at lichens. The outing was organised in conjunction with the Ecomusée du Véron. 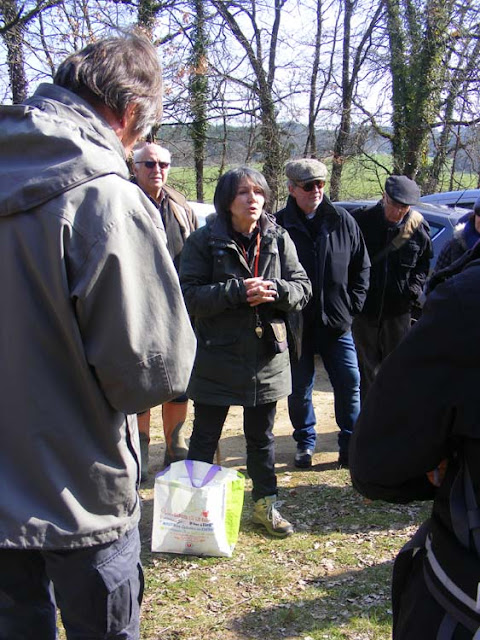 Lichen is not one but two organisms, living symbiotically. A fungi captures an algae or a cyanobacteria and protects it from dessication. The two organisms are then able work together to extract and share nutrients from their environment (they photosynthesise). Many species grow on trees, but they are not parasitic. They come in many physical forms, from flat and leafy and tiny multi-branched tufts to crusty growths, powdery dustings and blobs of jelly.

Reindeer moss Cladonia rangiformis (below) can be distinguished from lookalike
C. furcata by tasting it. The latter tastes bitter. Reindeer moss is a typical lichen of
dry limestone sites, growing on the ground. Despite its English name it is not a moss. 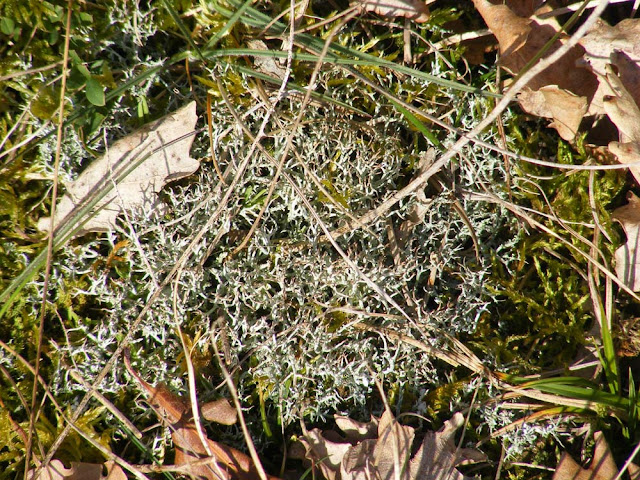 Field Dog Lichen Peltigera rufescens (below). The ash grey colour tells you it is dry.
It is a locally common species of well drained calcareous soils. 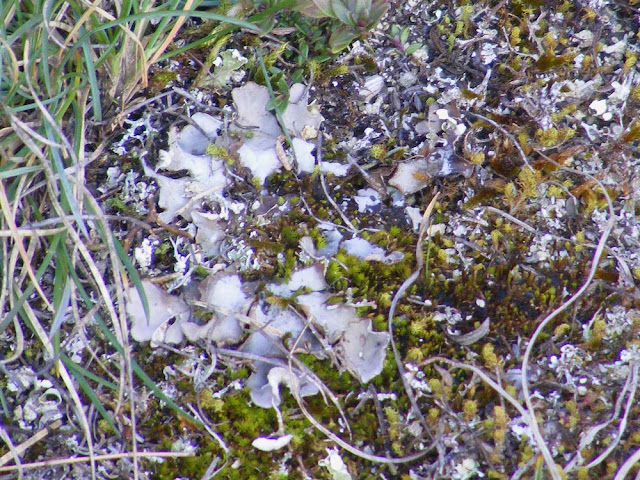 Placidium squamulosum (below) a widespread but localised species of calcareous soil and rock crevices. It looks just like dirt. Marie-Claude could spot it from standing a couple of metres away.
I had to get down on my hands and knees with a loupe. 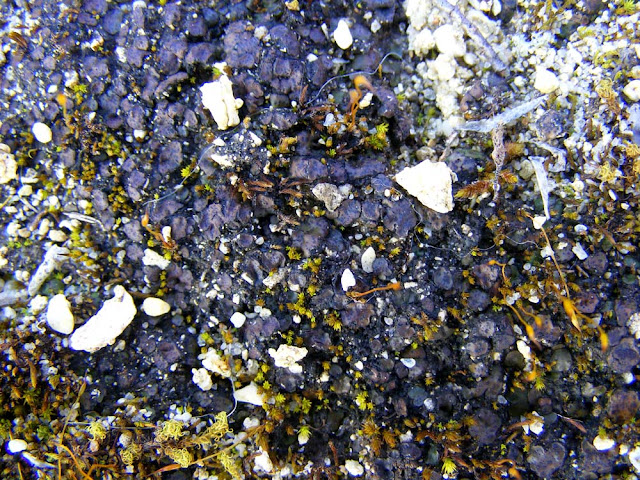 Scrambled Egg Lichen Fulgensia fulgens (below) a rather uncommon species that grows on exposed chalk or limestone, usually amongst a moss, where there are no competing plants, but this one is going it alone on a piece of limestone in full sun. 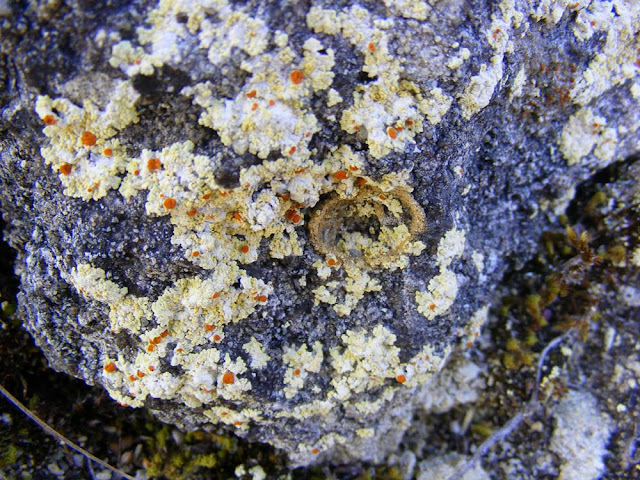 The view from the sunny slopes of the Puy Besnard (below) looking south. 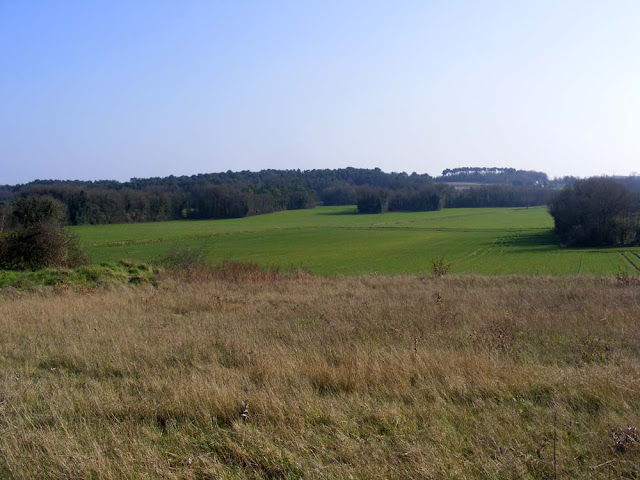 Looking for lichen on a tree (below). Note the small break away group on the right,
looking at the ground. They've been seduced away by a fungi on a stump. 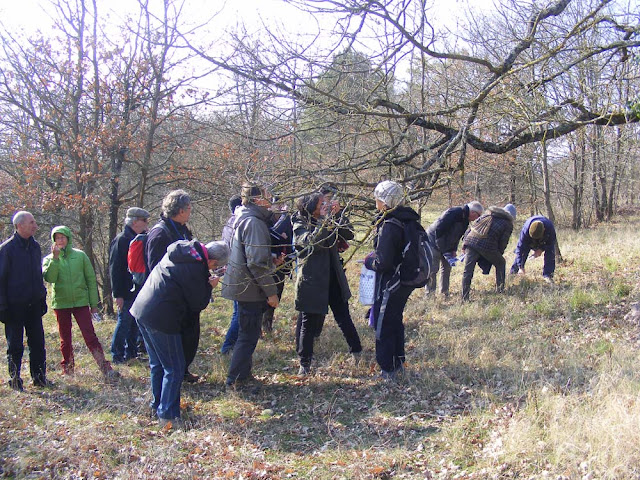 The lovely Physcia leptalea (below), scarce, localised and declining,
a lichen of slightly base pH bark. 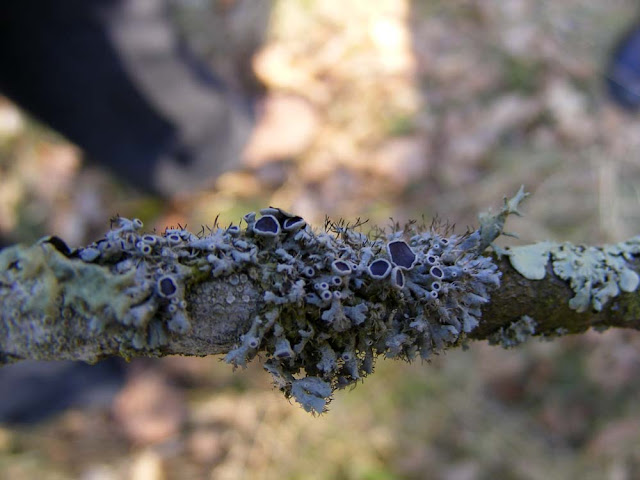 Below, a malaise trap set up to catch insects. The Conservatory is creating an inventory of the insect species on the site and by extension for the departément of Indre et Loire.The insects come flying across this sunny clearing and hit the vertical screen. Their instinct is to crawl up the screen. When they reach the top the slope of the 'roof' directs them to the front corner, where they will fall into the alcohol filled collecting bottle. This trap looked brand new, fresh out of its packaging, so it seems like some lucky person has got some funding to do some actual science. Mostly this trap will be catching flies, bees and wasps. 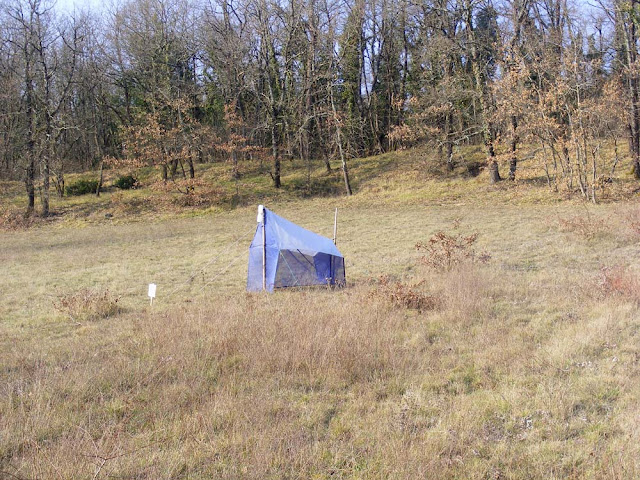 Nature is really amazing in its variety! Man is doing his best to mess up with nature's work. Who's going to win?