What the Fulk is he Doing!?

Fulk Nerra (970 - 1040) Count of Anjou is one of our favourite local historical characters. He is buried in the Abbey Church La Sainte Trinité in Beaulieu lès Loches (referred to by Fulk as Belli Locus and dedicated to the Holy Sepulchre) and recently with some time to kill, we, and medieval historian friends Niall and Antoinette, went to visit the church.

The eastern windows are stained glass and right in the middle, at the bottom, is a rather odd scene depicting a barefoot knight on his hands and knees. Niall correctly assumed it was Fulk, but since he only knew Fulk's story in fairly broad terms he asked us if we knew what the window was portraying. 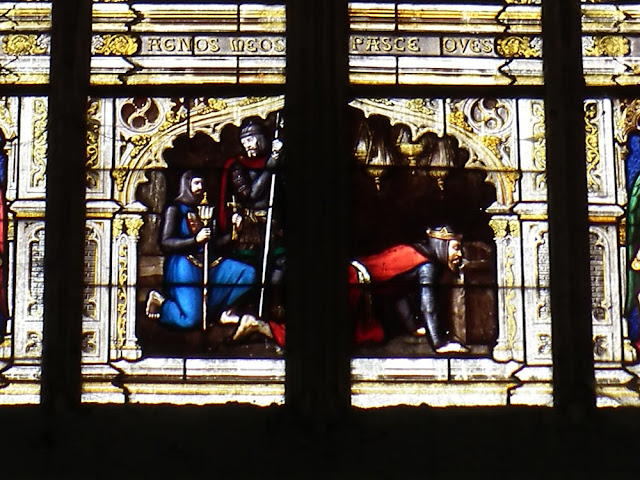 Luckily, we did know the bones of the story, and it is one of the best associated with Fulk. Fulk died in 1040 and around 1100 a monk from Anjou sat down and wrote a history of the Counts of Anjou. This is one of the stories he told about Fulk Nerra:

Fulk went on pilgrimage, initially to Rome, where he received the Pope's blessings and a papal letter, which he was to take to the Emperor in Constantinople. When he got to Constantinople he ran into Robert Duke of Normandy, who was also on his way to Jerusalem. Robert was making the long and dangerous journey in penance for having poisoned his brother seven years earlier in order to gain the dukedom for himself. He had by this time already fathered William, who would become the Conquerer of England.

After presenting the papal letter to the Emperor, the pair were introduced to some men from Antioch who happened to be in Constantinople. They agreed to guide Fulk and Robert through the lands of the Saracens. Robert died on the journey, but Fulk arrived safely at the gates of Jerusalem. However, he was not permitted to enter the city without paying a hefty fee. Having done this, and payed for all the other Christian pilgrims hanging about the gate in the same situation, he swiftly made his way to the cloisters of the holy tombs.

But he was barred entry to them as well. The Saracens knew his reputation for quick temper and goaded him. They told him that if he wished to enter he would have to piss on the tomb he wished to see and on the cross. He wasn't happy about it, but he agreed to the conditions. Fulk may have been quick tempered, but he was also clever. He had a ram's bladder brought to him, cleaned it, filled it with fine wine and hung it between his thighs. Approaching the Holy Sepulchre barefoot, he allowed the wine to flow over the tomb. He and his companions were allowed to enter the tomb and pray. They were overcome to the point of tears.

After a time, Fulk sensed the divine power. He realised the wine had softened the hard stone of the tomb. Reaching forward as if to kiss the sepulchre he bit a piece off and concealed it in his mouth. The guards did not notice he had stolen a piece of the tomb and he was able to smuggle the holy relic back to Loches. He was also given a piece of the True Cross by the Syrian Christian guardians of the tomb, after he distributed generous gifts to the poor. Once back in France he had a church built at Beaulieu lès Loches and there installed the relic of the Holy Sepulchre and appointed an abbott. His piece of the True Cross and a piece of the thong used to bind Christ's hands that he had also acquired were installed in a church in Amboise.


Jerusalem, as depicted on a shield held by a sadly mutilated angel in the church at Beaulieu. 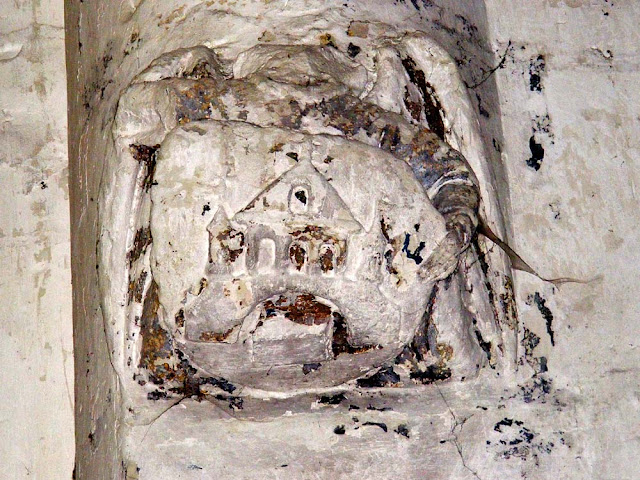 Although the monk writing the history doesn't specify when these events took place, the pilgrimage when he was accompanied by Robert of Normandy was Fulk's third pilgrimmage to Jerusalem, in 1035. Robert, who was known as Robert le Diable, had indeed gained the dukedom on the sudden and unexpected of his brother Richard, but there is no real evidence that Robert had a hand in his death.

The incident where Fulk supposedly acquired a piece of the Holy Sepulchre was during his second pilgrimage, in 1008. The records show that he certainly had a relic which he believed to be from the True Cross, but it was donated to Belli Locus, not Amboise, and he had probably acquired it from a relic dealer in Rome. He was always extremely generous to the abbey at Beaulieu, which he had already endowed by 1004 and was dedicated in 1007, before his return from his second pilgrimage. I have read somewhere (but can't now find the reference) that this relic of the True Cross still exists, and is now housed in a church somewhere in the Berry.

There are other stories of pilgrims being so overcome when faced with holy artefacts (in particular, the True Cross) that they have bitten pieces off. It seems to be a story that conflates the ritual of kissing a relic and taking the Eucharist wafer during Mass and all are now considered to be apocryphal.However, Niall has pointed out to me that there must have been some contemporary concern about people getting up close and personal with the relics, as he has found an ordnance which forbids pilgrims to lick them.

Fulk made four pilgrimages to Jerusalem over the course of his life. The first was in 1003, and as usual with Fulk there are conflicting stories as to why he went on pilgrimage. One story, the best known, is that it was to atone for having burnt his first wife at the stake (and for burning a considerable portion of the population of Angers in their own homes before this when laying seige to his wife, who was holed up in the city, after he accused her of adultery). The other story, probably more likely, is that it was to atone for the loss of Christian life in his battle against Count Conan of Rennes in 992.

The second pilgrimage was in 1008, when he was ordered to go by King Robert II as penance for murdering an enemy. Once again, there are two different versions of the events that led to Fulk going on pilgrimage. Much of Fulk's life was concentrated on acquiring the territories around Tours and Blois, and there are indications that he killed an unnamed opponent inside the cloister of Saint Martin's in Tours. The monks, horrified, performed a curious ritual where they scattered their holy relics on the floor of the church and surrounded them with thorns in response. They only restored order once Fulk had formally repented and been sent on pilgrimage. The second version is that he killed Hugues de Beauvais, the King's favourite, right in front of the monarch and on the orders of Queen Constance, who was his cousin and to whom he was close.

I'm inclined towards the first version of events because although it is nowhere clearly stated that Fulk murdered someone in the cloister, the monks did respond to something he did in this peculiar and distinctive way. He and Queen Constance were undoubtedly close, and she gave him a piece of the Virgin's girdle, which he donated to the church in Loches, now known as Saint Ours, but then dedicated to Notre Dame. However, no one seems to be able to establish exactly who this Hugues de Beauvais was (as in his parentage, birth date, etc), and I would have guessed that cold bloodedly killing the King's favourite in his presence on a hunting trip might have resulted in a more severe and long lasting punishment than being ordered to go on pilgrimage.

His third pilgrimage, in 1035, was in the company of Robert of Normandy, who died on the return journey. Fulk himself died while returning from his fourth pilgrimage in 1038. On the third and fourth pilgrimages Fulk appointed himself as protector of pilgrims to the Holy Land, travelling with troops he employed to guard all pilgrims against robbery, enslavement and murder.
Posted by Susan at 09:00

What a great read! Had to read it out to my husband.

It's a wonder that with all these pilgrimages he had time to build his empire.

Mention of the Virgin's girdle makes me wonder how just long it might have been: there's another piece in the church at Le Puy Notre Dame in the Maine et Loire - given by William Duke of Aquitaine

Mark you,having read Peyrefitte's' The Keys of St Peter' when young I have a certain scepticism about relics.

He seems to have been a remarkably energetic man. We are amazed at all he managed to achieve too, even while spending 2-3 years x 4 out of the country. He built at least 30 stone chateaux-forts (in fact, was the first medieval leader in France to do so) and at least 4 abbeys. Part of his secret was that he was always very generous to those who were loyal, so he didn't lose territory while away, and presumably the building projects continued under the supervision of his loyal overseers.

I can't imagine there are very many people who don't wonder just how many heads some saints possessed, or how many legs...