It is ten years ago today that we started looking at property in France.

The search started in the Charente because we had been there and rather liked it, but looking at the internet in London it seemed like there was little available in the area. (We know - but the internet wasn't as developed as it is now, and we may have been a little naive as well...). Then we looked at Deux-Sèvres and saw a property we thought we liked, so a quick phone call to the real estate man later we were organised for a visit.

We looked at a house overlooking/overlooked by this chateau, which
had been blown up by its owner in 1949 as a tax avoidance measure. 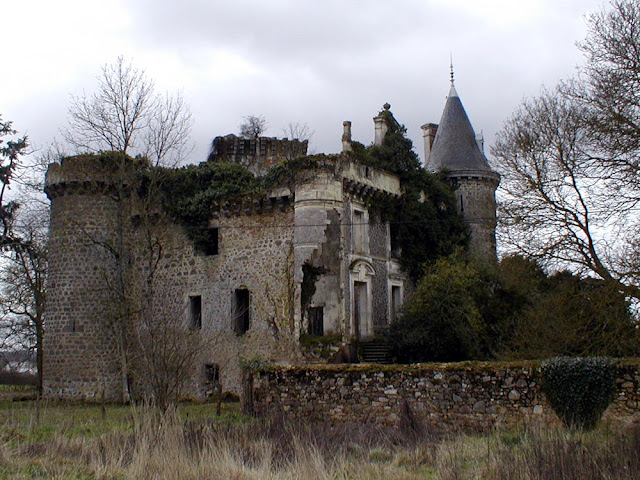 It was an inauspicious start in a couple of ways:
The flight (from Gatwick to Nantes) was delayed by 4 hours and 59 minutes (not 5 hours, because that would have meant serious compensation from the airline).  BA had given us food tokens at Gatwick, but only one restaurant was open (and that was closing as we walked in) so we bought about £30 worth of biscuits and bottled water. After pushing out from the gate 4 hours and 59 minutes late, we sat on the tarmac for a further 25 minutes, which meant we arrived at past 2.00am in Nantes, where BA booked us a hotel for free because the car hire place was closed.

When we arrived at the house we wanted to look at we discovered there was a compromis de vente already signed, so we trawled around various other properties (none of them meeting our strict requirements) until Susan got bored. We were then shown a house in Argenton-Chateau (now called Argenton-les-Vallées) near the church.

On our flight back to London there were no delays, but the effort of the trip was too much for one of us, so on the Monday we came to an agreement and phoned the agent to make an offer on the property by the church. Luckily, that was declined, which left us free to continue our search.

The house we didn't buy after all 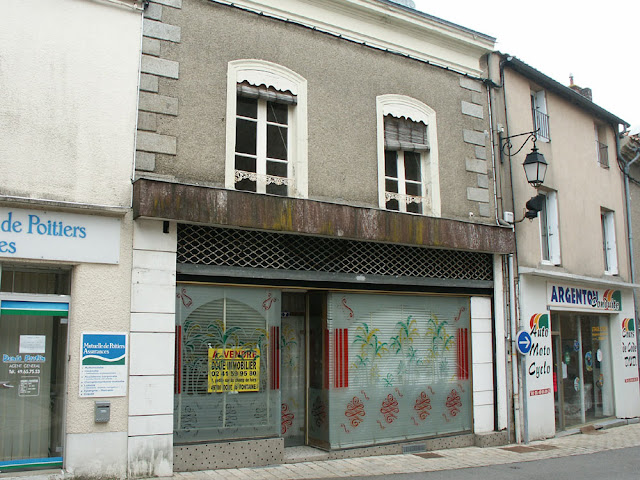 Monetising the Blog: It is already clear to us that this year could be financially difficult. Bookings for tours are down - everyone in the tourism industry here is saying the same. We've decided to allow ads on the blog to earn a bit of pocket money. The ad will appear on the right hand bar (unless you've got an ad blocker installed). We choose or ban the general categories of ads that appear, but we can't control what appears at an individual ad level within the allowed categories. Every time someone visits the blog we will get a very small payment and every time someone clicks on an ad we will get a marginally less small payment. This will vary from ad to ad, depending on the deal the advertiser has negotiated with Google. It will be interesting to see what it all amounts to. We won't see the ads here, but if you notice anything off colour, please let us know.

A la cuisine hier: I made up a batch of pickling brine to cool overnight. I've got some beef, pork belly and a beef tongue to brine today.
Posted by Simon at 09:00

Email ThisBlogThis!Share to TwitterShare to FacebookShare to Pinterest
Labels: Buying a house, Pictures of Chateaux

I too think you were fortunate to have your offer declined. So I've clicked on the ad today for Google Chrome (which I already use), and if I remember, will have a click each day!!
Hope the bookings pick up.

I'll click as often as I can. Hope there will be soon an upturn in your business. In any case, I'll keep my fingers crossed.

Clicking busily away. I have adblocker, but for you guys, I'll figure how to turn it off for the visit.
Are tourism bookings down because of local or international economies, or other?

Also, is the payment based on different individual visits, or do multiple daily visits from the same computer count as plurals?
Click, click . . .

Thanks Emm, chm and Gaynor.

I think bookings are down because of the terrorist attacks in Paris and the US Presidential election. We noticed a downturn in bookings last time there was a US Presidential election. There is a period of uncertainty that causes people to delay plans. Paris is competing with London as a tourist destination and London is reporting an upturn. I suspect the Touraine Loire Valley competes with Tuscany or thereabouts in the minds of those planning holidays, but I don't know what the figures are.

I don't know if multiple clicks from the same computer will be counted.

I had KLM airlines..duly clicked...

I know those premises...next door to my first insurance agent/political fixer.

Thanks. And what a coincidence!

Where was the castle?