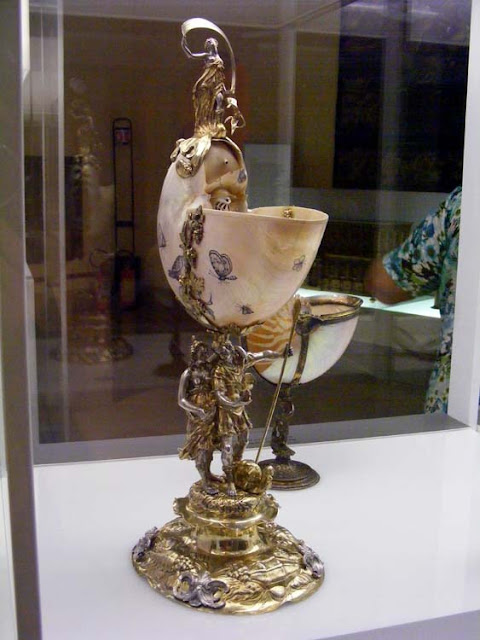 Two nautilus shells displayed on 16th century pedestals of chased and gilded silver, now in the Castello Sforzesco. Nautilus shells were highly prized as objects to be displayed in Medieval and Renaissance cabinets of curiosities and goldsmiths were commonly employed to create extravagant mounts for them. The shells themselves come from the western Pacific (Malaysia, Vietnam, China) and documents of the time comment on their rarity and high cost.

The one on the right in the background shows its natural stripey pattern, but the one on the left, in the foreground, has had the stripey layer scraped off to reveal the mother-of-pearl below. Northern Italy and Southern Germany, especially Padua and Nuremburg were the main centres of manufacture. These two are simply decorative objects but occasionally they were made into drinking vessels, ewers or inkwells.

The foreground shell has been additionally decorated by engraving butterflies and flies into the side of the shell, making them stand out by rubbing them with a mixture of powdered coal and wax or oil. The innermost curl of the inside of the shell has been cut to look like the helmet on a suit of armour. Some of the decorative elements of this shell indicate that it is from the end of the 16th century or even into the 17th century and may have been made in Flanders.
Posted by Susan at 09:00

I've also seen one with a cobalt-blue glass liner...
and matching spoon to the o.t.t. deco...
presumably for use as a salt.
Whilst I cannot abide this form of decoration, normally...
it seems to work very well with certain materials...
horn and shell particularly... and some burr woods...
one that comes to mind was an abalone shell...
probably also a rare and exotic beast at the time.
I've never seen the engraving like this before, tho'...
but recognise the style from plates.

There exists also a beautiful, Art Nouveau table centre...
the Nautilus has been cut from stem to stern and is mounted in silver seaweed... when I saw it in London, it had little silver gilt closed boxes... one for each compartment... except the two open ones...the compartment made by their joining was, again, a salt.
It belongs to the HAC... but whether or not it is ever used??
I have no doubt that regiments of long standing like that probably have table salts galore!! So the more decorative probably live in cabinets in the Officers' Lounge.
Because there is a line of symetry where the two nautilus halves join, I would place it at just before/after The Great War...
when Art deco was beginning to morph into Art Deco.