Many things have been written about vegemite, so I won't....

Just to say that on their recent visit, Susan's uncle and aunt brought us a small jar of vegemite. It's an Australian icon, something both Susan and I grew up with and probably ate every day as children, but not something we missed when we left Australia. 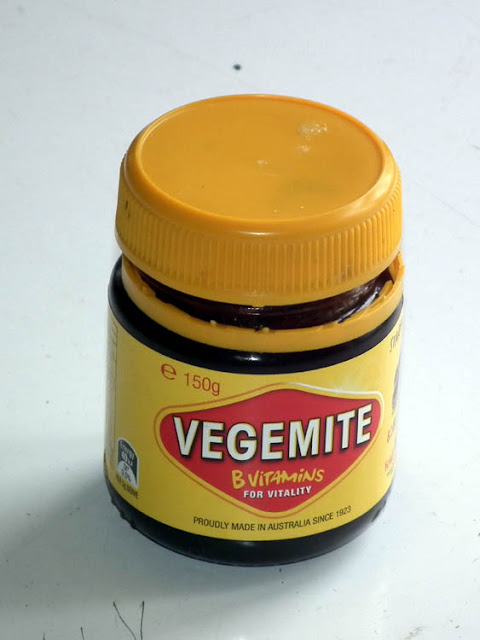 The jar is almost empty, and we are trying to work out who our next vegemite courier will be. I know it can (or at least could) be bought at Tesco in the UK, but just wouldn't be the same.

Vegemite - the taste of childhood. I suppose next I will be getting nostalgic about Milo...
Posted by Simon at 09:00

I could send you a jar. It's available at Stonemanor's, the British store in a nearby village!

It's a kind thought, but it would be even more outrageously expensive than at Tesco, so it just isn't the same. It's not a product one should pay much for :-)

Or Susan and Simon, you could wait until we return late next year. Did you know it comes in a tube, just perfect to brush your teeth with.

If you can squeeze some in (no pun intended...) that would be great! I think I have seen it in tubes.

I had Milo growing up on the island ( imported from Australia btw) as well as what was called Kraft Cheddar Block Cheese ( little did we know, as children, that it was full of preservatives but it was tasty to the young palate) but never vegemite.

Have just looked it up... How does it differ from the British Marmite? We have a full new carton of that!!

Having tried both against each other....
our local supermarket once had both side-by-side on the shelf...
Marmite is nice... Vegemite is yuck!
Vegimight is far saltier and apart from an overriding need for a drink to wash away the salt...
it seemed to taste of nought!
The look of Vege"won'tagain" is the same as if you've taken a knife full of Marmite and squidged it up and down on the buttered toast to aerate it... sort of dark, creamy brown...
but, my tastebuds grew up on Marmite...

Brother in law brought us Marmite from Australia....it did not taste like British Marmite.but more like the Vegemite he brought along as well. I'm still trying to work out what to do with the Vegemite...

I have a friend who likes to have his croissants coated in a smear of vegimite.