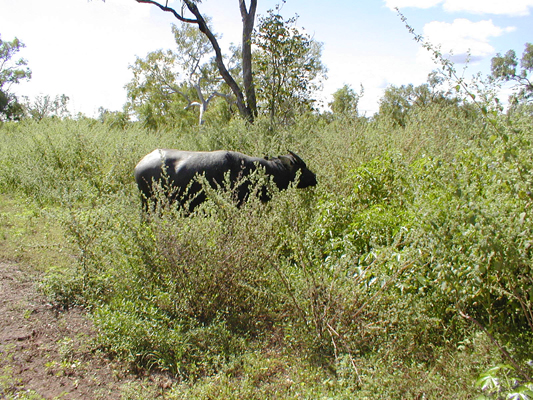 This feral Water Buffalo Bubalus bubalis is the only one I have ever seen, and I can assure you I was not as close to it as this photo makes it look. They have a reputation for being extremely dangerous.

Water Buffalo were introduced to the floodplain country of northern Australia in the 19th century to provide meat for remote communities and other resources such as leather. When the settlements were abandoned so were the buffalo and they roamed wild, causing the spread of bovine diseases such as tuberculosis and brucellocis, and damaging wetland environments by trampling, wallowing and eating a huge quantity of vegetation. A concerted effort was made in the 1980s and 90s to eradicate them, especially from Kakadu National Park, and numbers fell dramatically but because of the terrain full eradication was not possible. However, according to the Department of the Environment's factsheet, numbers are again building. Some Aboriginal communities now depend on them for food, but they have no other natural enemies.
**************************************
French Expressions: Yesterday at the market my friend Louisa described her 9 month old grandson as having cheveux blond vénitien. I knew about the Renaissance fashion for bleaching dark hair blonde, which was all the rage in both Italy and France, but I had never heard this expression used in a modern context before. When I got home I looked it up. It turns out to mean what I would call 'strawberry blonde' in English.
Posted by Susan at 09:00