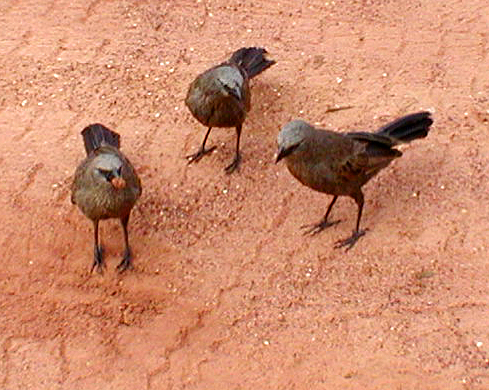 Apostlebirds Struthidea cinerea live in family groups in inland eastern Australia. They are chummy and entertaining, clacking and chattering their way across the ground feeding on insects, and not particularly wary of people. These ones are part of a separate small population that lives in the Northern Territory, but I grew up with Apostlebirds everywhere in the Belah Casuarina cristata woodlands of the Darling Downs.

They are the only member of their genus and there are only two species in their family, both endemic to Australia. They nest communally in a mud nest presided over by a dominant male and female, assisted by numerous young helpers. Occasionally, when a group becomes too small, they have been observed kidnapping the young of other groups and raising them as their own. They got the name Apostlebird because they hang out in social groups of about a dozen (but it can be anywhere between 6 and 20 birds).

There's a certain "Jackdawness" about these guys...