Domaine Charles Joguet is ostensibly based in the tiny village of Sazilly, between Chinon and l'Ile Bouchard, but in fact they have small parcels of vines scattered all over the AOC and they have a magnificent underground 15th century cellar near Marcay. Céline, who works at the estate tells me they've taken the precaution of buying the land over the cave too, as apparently the owner of the underground is responsible in French law for any problems topside.

Charles Joguet, who took over the family winery in 1957, has been gone for some years, having retired in 1997 to go back to being a full time artist, and the Domaine is now owned and run by the descendents of his business partner, the Genet family. Joguet was not a winemaker, but had trained as an artist in Paris. When he returned to Chinon and picked up the reins he was viewed as an upstart, an outsider, and with his modern ideas about winemaking in a deeply traditional area was the object of considerable local scorn. By recognising the effect of terroir and his conviction that with a more nuanced approach he could make great wine he more or less single handedly created the reputation Chinon AOC enjoys today. He was the first Chinon winemaker to separately vinify different parcels of vines and to bottle and commercialise on the estate.

The Genet family continue the innovative and somewhat rebellious tradition of their predecessor with passion and sensitive attention to detail. The aim is to make the highest quality wines they can whilst expressing the rich diversity of terroirs in the Chinon AOC. Like all Chinon winemakers their main production is cabernet franc, but they also do a bit of chenin blanc sold as Touraine AOC.


The Charles Joguet range of wines lined up for a tasting session. 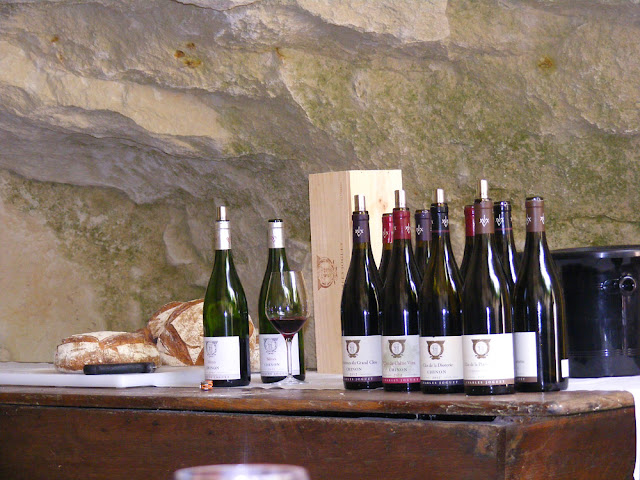 Like all good winemakers they know that quality starts in the vineyard itself. They go to the extent of working with the National Agronomy Research Institute (INRA) to analyse every parcel and develop a management plan for each. One of Joguet's radical ideas was to produce highly distinctive wines from single parcels, not blending from different terroirs to produce something more generic. Since 2008 the Domaine has been in transition to being certified organic, but have chosen to wait a little before official certification to see how the system settles in the vineyard. At harvest time they ruthlessly and precisely sort the grapes so that only those in the best condition get through to the press. Over time they have slowly begun delaying the sale of their wines so they are aged longer in the cellar. They are aiming for balanced, harmonious wines with rounded tannins that are not bottled too early.

This rigorous approach has been difficult in the last few years, with 2012 and 2013 yields drastically reduced. They remain upbeat though, and convinced that the resulting wine speaks for itself.

On my visit to the Domaine with the Charles Hastings Wine Club we tasted the following 2012 wines (all except the last are cabernet franc):


The Charles Hasting Wine Club tasting in the magnificent cave at Marcay.
Fully equipped with toilets and a barbecue, its only disadvantage is that it is so damp Céline (middle back) can't leave anything there that might go mouldy. 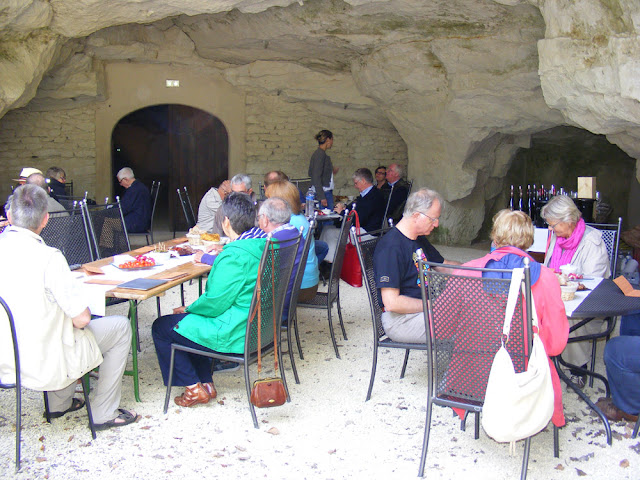 Cuvée Terroir - €9/bottle, now renamed Silene, after the French name for Sand Catchfly, a rare wild flower which has reappeared in the sandy soil of this parcel since going organic. This sandy soil imparts a classic leafy but fruity cabernet franc, matured in stainless steel vats and to be drunk young and cool.

Cuvée de la Cure - €15/bottle. The Domaine advise keeping this another 6 months before drinking and it has the potential to keep for 10 or more years. They didn't make any of this wine in 2013 because this parcel was badly frosted. The vines from this 2ha parcel were planted in 1974 on an alluvial gravel terrace over clay just in front of the church in Sazilly (south bank of the Vienne). It yields about 45 hectalitres per hectare.

Les Varennes du Grand Clos - €23/bottle. Below the gravel terrace, this 4.5ha parcel of vines were planted between 1962 and 1972 on flinty clay chalk deposited by the erosion of the slope above. They yield about 40hl/ha.


In the depths of the cave. I didn't notice the graffiti until I processed the photo. 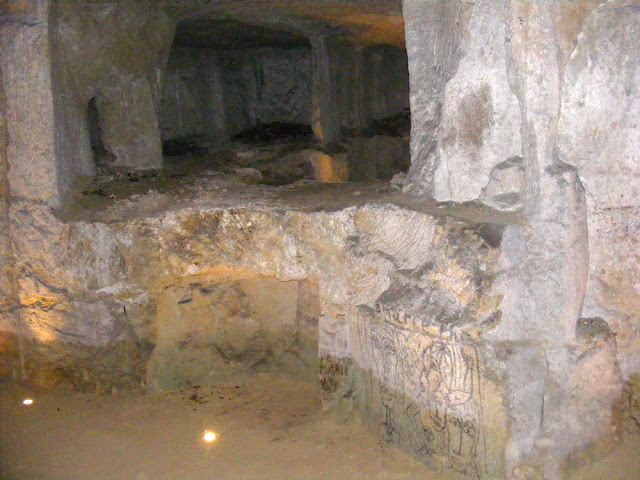 Clos du Chene Vert - retails for €30/bottle. This wine is aged for 18 months in oak and should be served warmer than the Silene. These vines are right in Chinon itself, on one of the most famous locations of all, on the north bank of the Vienne. It's 2ha on a very steep slope facing south-west with clay and flinty chalk soil. The site takes its name from the enormous Holm Oak at the top of the hill, the regrowth from a tree planted more than 800 years ago by the monks of Bourgueil in the 12th century. It yields about 30hl/ha. When Charles Joguet bought the parcel in 1976 it had been a vineyard for a thousand years, but was at that time abandoned and overgrown. He had no money and it was the other side of the river to the rest of his holdings, 12km away from the winery. It didn't seem like a very practical acquisition. Not being able to afford a tractor, he ploughed it with horses.

Clos de la Dioterie - the Domaine's most famous wine, made from 80 year old vines (the oldest on the estate). It's aged for 22 months in oak barrels. This parcel is a little more than 2ha, right next to the winery and overlooking the Varennes parcel, facing north-east, which is apparently perfect for maturing cabernet franc grapes. The soil is very calcareous clay. These very old vines don't yield much (only about 30hl/ha) and are the object of particularly attentive care.

Clos de la Plante Martin - this is a dry chenin blanc, sold as Touraine AOC, which undergoes a slow maceration at 8 degrees centigrade. 30% of the wine is aged in new oak barrels then blended with the rest. It was absolutely superb with a thin apple tart glazed with red wine jelly. The vines were planted on this limestone clay slope between 1994 and 1999 and is an area of slightly more than 3ha, yielding no more than 30hl/ha (often less).

Between Les Varennes du Grand Clos and Clos de la Dioterie is an open strip of land. In 1982 Charles Joguet got permission to plant ungrafted vines here. It is often forgotten that the prize for eradicating phylloxera has never been claimed, because it has not been eradicated, only controlled, and the disease still kills vines every year here. These vines of Joguet's, unprotected by robust rootstock, were finally grubbed up in 2008, having succombed to phylloxera.

Charles Joguet is a legendary name in Loire Valley wine circles, and he seems to have been an inspired winemaker. However, his successors seem to have divided the wine world into those who feel they are not living up to his reputation but simply trading on it, and those who have such reverence for the man that they remain uncritically loyal to the brand.

I'm not an impartial nor a terribly informed judge, since I am no great fan of cabernet franc and Chinon AOC in particular. However, I do love chenin blanc and thought that the Clos de la Plante Martin was extremely good. I also think that their current approach to vineyard management can only be good and there is no question that their wines  continue to reflect the effect terroir can have on a wine.