Back in March I was contacted by David Armstrong asking if I could help him with a project he was involved with. He'd found me by searching for 'Red Helleborine France' and come across the blog. He and his colleagues wanted to visit France and study the Red Helleborine Cephalanthera rubra. By doing so they hoped to learn more about its ecological requirements.

Red Helleborines and other orchids often grow in the middle of woodland tracks, probably because the light levels suit them. 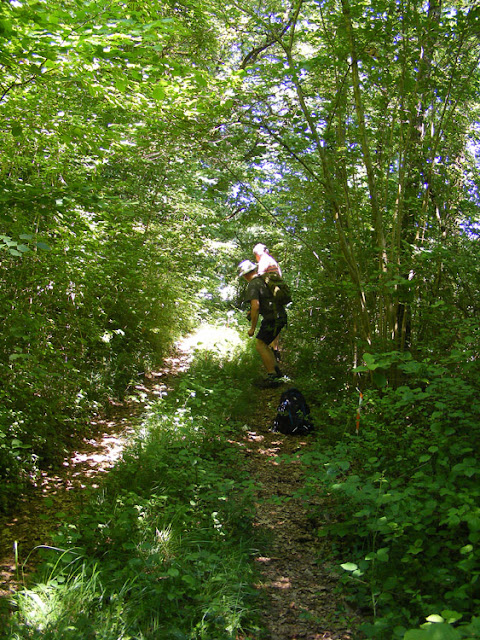 It just so happens that where we live is a bit of a hotspot for this rare orchid. It's rare and protected even in France, but there are half a dozen good colonies around Chaumussay in the Claise Valley, and a couple at Panzoult in the Vienne Valley, as well as other scattered records throughout the département of Indre et Loire. In Britain though it's even rarer and there are perhaps 30 plants left in the whole of the UK. David is a warden with the National Trust and is responsible, along with his team, for the management of most of the UK's remaining Red Helleborine. 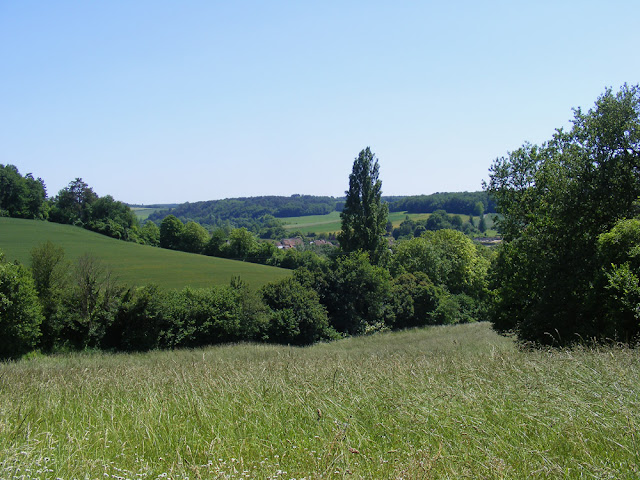 Some years ago, when it was obvious the situation for the survival of this plant in Britain was desperate, the UK Red Helleborine (Cephalanthera rubra) Restoration Group was set up. This group is dedicated to the conservation of the remaining population, their restoration and reintroduction. The group includes members from the National Trust, a large heritage and nature conservation charity, Natural England, the government body responsible for policing protection legislation, providing advice on the management of sites, and funding research, and the Royal Botanical Gardens at Kew, a world reknowned botanical garden on the outskirts of London. Kew is engaged in researching how to propogate the species, but it is not proving easy. The plant is classified as critically endangered in the UK.

Red Helleborine on a privately owned site at Les Reuilles. 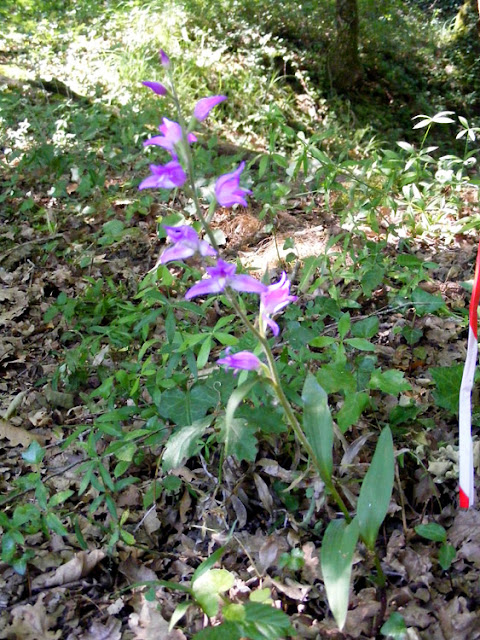 No viable seed is being naturally produced by the British plants, and even when hand pollinated success is not high. Kew is struggling to germinate what seed there is and the seedlings are feeble. The group decided to visit Europe to see established and thriving wild colonies. They hoped to get ideas on how to manage their sites and make contacts for future networking. One of the most likely outcomes is the possibility that they will apply for permission to collect seed in France and thus allow the research into germination to continue.

David and Tim photographing rare Military Orchids on a roadside bank near Chaumussay. 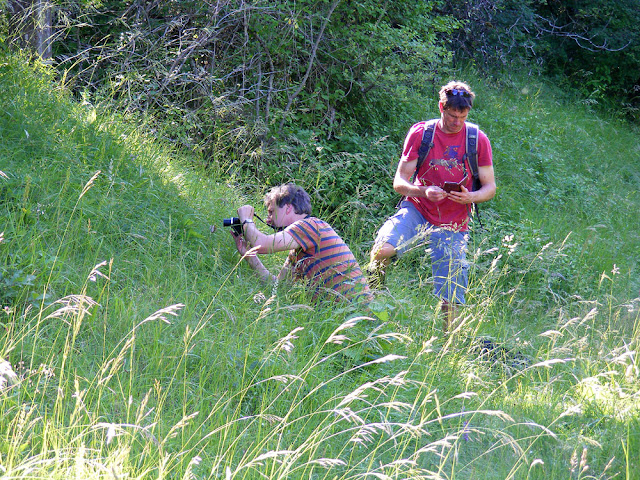 Before David and his two fellow wardens visited, my orchid expert friend Marc Fleury and I checked out the local sites and marked plants with red and white tape. After they arrived I took them to all the sites and they studied them for clues as to what their plants were lacking. Marc wasn't able to join us, but our friend Jean Pelle, also a well known local orchid expert joined us for the first morning. 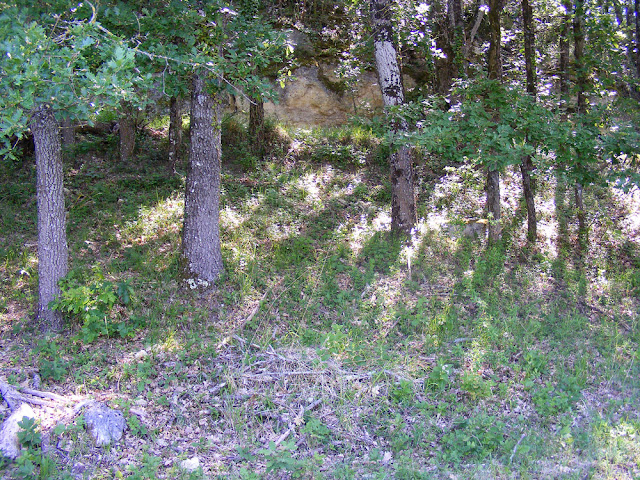 It was quickly obvious that there are differences between the English and the French sites. In England I'm told that the species grows in mature Beech Fagus sylvaticus woodland on sloping limestone sites with thin soil, in quite heavy shade and with little other vegetation. In France the orchid grows in dappled shade from Downy Oak Quercus pubescens woodland on south facing limestone ridges, in association with Juniper Juniperus communis and many other grasses and wild flowers of dry limestone sites. These French sites are often old sheep pastures, used to graze sheep because they were too steep to plough. The thin soil is low in nutrients, alkaline but close to neutral. According to Marc, there are often truffles under the oaks, and a heavy fungal parasite load, leading to the oaks being stunted. His observation is that where you find one Cephalanthera species you are likely to find the other two (Narrow-leafed Helleborine C. longifolia and White Helleborine C. damasonium). Also common to the French sites is man-made terracing in the limestone, and the French specimens seem to enjoy a little more sunlight that the British ones currently get. 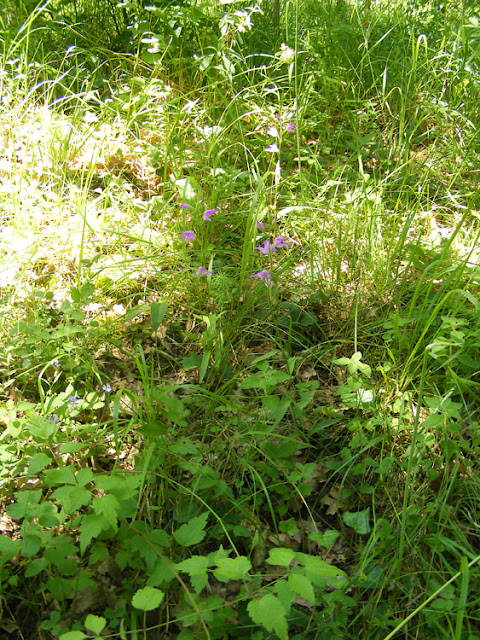 A Red Helleborine flower visited by an insect.
My impression was that it was a fly, but it might have been a bee.  In any event it did not emerge with pollenia attached, so it is presumably not a pollinator. 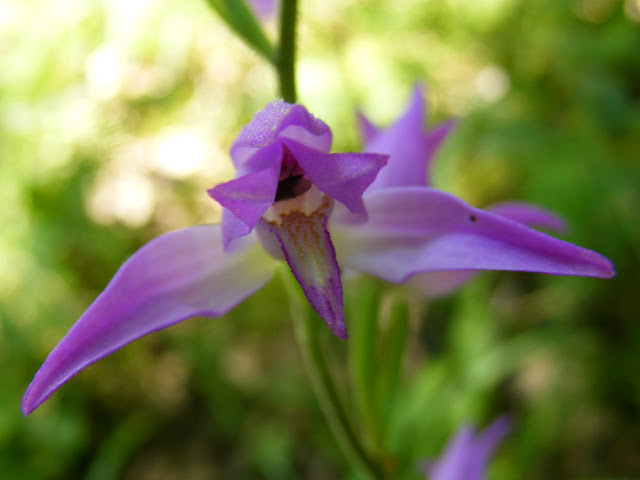 Kew has not yet investigated what mychorrizal associations the orchid has, but a lack of the right fungal partners in the soil is one possible explanation for their failure to thrive in England. Another explanation could be that they have lost their pollinators. In France they have been observed to be pollinated by male bellflower carpenter bees Chelostoma spp as well as other hymenoptera.

The research team had a great time. They had never seen so many Red Helleborine, nor such large ones with so many flowers. They also got to see 20 other species of orchid, some of which they had never heard of before, or never seen before. It was a real reminder to me that what we have here is truly special. Orchids that we almost take for granted, such as Lizard Orchid Himantoglossum hircinum or Monkey Orchid Orchis simia are really rare in Britain, and even in other parts of France. Others, such as Small-leafed Helleborine Epipactis microphylla and Violet Limodore Limodorus abortivum don't occur at all in Britain, but can be found here if you know where to look.

And here was I expecting this morning's post to be about Domaine Charles Joguet....
well, that's what's come up in the sidebar on our blog....
came up before midnight, actually!
This is far more interesting to me...

"It was a real reminder to me that what we have here is truly special."...
it is special, isn't it...
like this team, I had only seen four of the local species in the UK...
Bee and Pyramid in the dunes on the North Norfolk coast...
Twayblade and Man Orchid in the woodland near Guildford...
mainly, I used to see Dactylorhiza species!

Here it is Orchid Paradise....
they must have left here as happy as sand larks...
let's hope they can duplicate the environmental conditions...

I've noticed recently that the big black bombers are nectar cheats...
they land on the flowers and go straight in at the side or the back with their "beak"...
although, I did see one the other day with a great streak of pollen down the back of the thorax and onto the abdomen...
so that one must have gone headfirst into something...
rather than bypassing the alloted task and going straight for the pay-off!

Surprised not to see a comment from you on the Chedigny town centre water voles...

Hi Susan,
This post has been really interesting, informative and a tribute to the work you've done raising the profile of the flora and fauna in the Loire Valley and beyond. Let's hope that the visit makes a difference to the survival of the Red Helleborine and other orchids in the UK.

I accidentally published the Charles Joguet post before it was finished.

I just ran out of steam re commenting on the voles. A terrific sighting, I'll keep my eyes open for them.

And we've just reported the first Yellow-necked Mouse [A. flavicolis] for Indre-et-Loire...
on Faune Touraine anyway...
but as it was dead on the doorstep...
presumably Baron... he catches mice of an evening, but doesn't eat them!!
As it was dead, I got good clear fotties of a complete collar... and of the clear colour change top and bottom on the side...
I've now put it somewhere for the maggots and ants to do their work, so I can check the teef!

That ”water vole” sounds like a serious pest -- sort of an Old World gopher.

Have you been reading Wikipedia? Frankly I'm not expecting a water vole plague in the Touraine Loire Valley any time soon.