We have finally bought a new (old) modern car.

It's a 2004 Ford Fusion with a 1.4 turbo diesel engine at 160k on the clock. It's a taller version of the Ford Fiesta so smaller than our current modern, but still big enough for me to fit into. Not a fancy car, but we hope it will be a good workhorse for days when one of the ladies isn't the best choice.

It is, of course, silver: one of the three colours one is allowed if one buys a sensible car (the other options being white or black). No doubt that means we will lose it in the carpark at Auchan, but them's the breaks - at the price we paid  you don't get all the options. 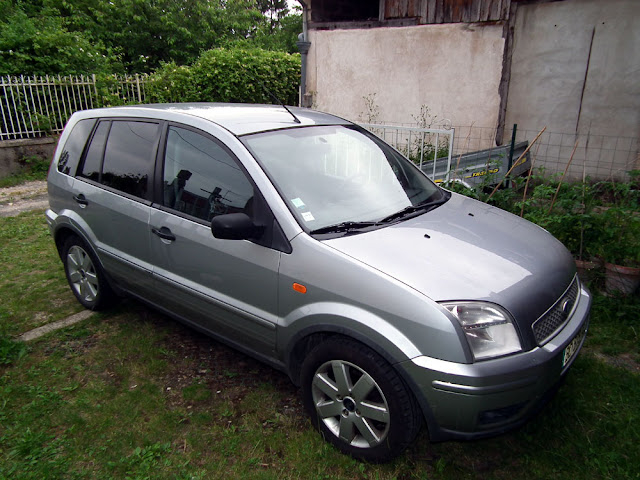 We did try a slightly more stylish car, a Fiat Punto. They are a pretty little car, and we looked at a well priced example and were sorely tempted - until I drove it. It was than that I discovered what people mean when they say they don't like electric power steering: it felt like I was playing a 1980s computer game, with no idea where the front wheels were pointing or how much I had turned the steering wheel. I like an an adventure, but that was just plain scary.

I don't name any set of wheels so it would be The Ford in our house... Looks Fine BUT colour choice NEVER BLACK as you will well know they show every speck of dirt!!! Silver doesn't..

Congratulations! I hope you enjoy your new car!
Fords are the only cars to have heated front windscreens - does yours? Very handy in Derbyshire winters anyway.
And Colin is right, silver cars don't look dirty until they're really dirty. Our black Golf looks fabulous for only about ten minutes after we've washed it and the blue one is not much better!
We never name cars or refer to them as "she" so for us it would be "the Ford".

Fiona would be a nice name for it, or possibly Freda the Ford.

The Prefect..with a towel in the boot for emergencies.

Fred would be a good name - boring but reliable, but then you do have Celestine. How much passion you have in one lifetime. Celestine and Susan.

Not forgetting the packets of peanuts!
Zaphod

or, being French...
HENRI

I guess you're all too young to know about Florrie Ford...

No... she was the Queen of the English Music Hall!!
Appeared in Leeds at the City Varieties Music Hall** in its original heyday...
and probably sang "Down at the Old Bull and Bush"...
her "signature" song...
but why her?

**For non-Brits reading this...
City Varieties was the home of the BBC's "Good Old Days" music hall show!
Tim

And now I've got an ear-worm!