We visited the Chatellerault Motor Museum when Simon's brother was visiting a week ago. Part of the museum is given over to an exhibit on the arms and cutlery making industry.

In the 19th and first half of the 20th century Chatellerault was home to an enormous arms manufactory, known as la Manu. Nowadays divided between an adult training centre, a circus school, military archive storage, a car museum and a hydro-electric plant it is the remnant of a long history of industry in this place.

From medieval times to the early 20th century, and particularly in the 18th and 19th centuries Chatellerault was a centre of knife-making. The industry ranged from large well regarded establishments such as Pagé frères to much humbler and smaller scale cottage manufacturies.


Cutlery made in Chatellerault, from the collection of Camille Pagé. 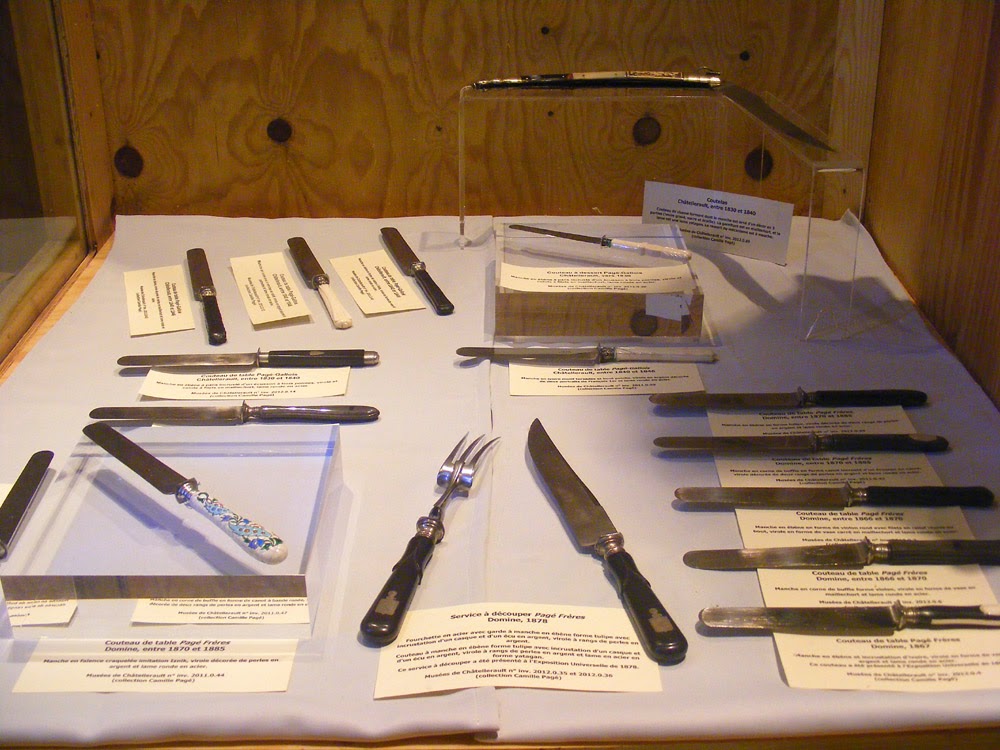 The director of Pagé frères was Camille Pagé, who became the chronicler and historian of the trade in Chatellerault as well as a serious collector of knives and related cutlery. His firm participated in the Paris Exhibition of 1878 and supplied cutlery to fine households.

The small scale manufacturers were obliged to submit their wares to an authority which judged their quality, but they were essentially making workaday knives sold cheaply to travellers on the street. The knives had a good reputation for being nicely finished, but their 'temper lacks hardness'. Chatellerault is on the Vienne River, on the main route from Paris to Bordeaux and women and children would hawk their cutlery to the many people passing through the town.

The making of table knives, scissors (and nails) was a family affair. Each house in some streets had a forge and each member of the family worked making cutlery, engaging in all the processes required. As a result the industry wasn't terribly efficient and families just barely scraped a living from their endeavours. This was different to in the large factories like Pagé, where each process was a specialist task and the product was passed from artisan to artisan until finished. As a consequence the factories used proportionally less fuel and their output was higher.

According to Camille Pagé, the Chatellerault table cutlery was stylistically much influenced by the presence of the large arms manufactory in the town. Although not made for the outdoors, the cutlery often looked like hunting implements, and workers migrated frequently between civilian and military spheres.
Posted by Susan at 09:00

I knew about Thiers and Nogent, and the Opinel and Laguiole knives, but, even tough my family had ties to the châtelains in Saint-Savin and to a priest in Chatellerault, I'd never heard it was a knife making city. That's where the Édoux sent their cocher to get us when we were visiting [almost ninety years ago!].

Fascinating...
but you quote " but their 'temper lacks hardness'"...
all to the good for a useable knife...
whilst the blade wears away to a ghost of its former self...
you can't half get a keen edge on such a blade...
and customers will keep coming back for more!

I think the knife making gets forgotten because the arms factory was so huge and overshadows everything (literally and figuratively...)

I was a bit confused by the 'temper lacks hardness' thing. The context suggested it was a negative point, but elsewhere I read that this type of tempering for table cutlery was normal and considered a good thing -- presumably for the reasons you mention. Almost all the info on the knife manufacturing is from original 17 - 19th century sources and takes a bit of wading through the old fashioned language and ways of expression.

Yes, you have to remember that they didn't have serrated knives back then!!
Take a look at our Sheffield steel veg cutting, ex-table knife...
it now has a distinct sickle'ish shape to the cutting side.

Nail-making (and needle-making) was very much a family affair in the "Black Country" of the West Midlands in the 18th/19th century - Wednesbury, Dudley, Bromsgrove etc and Stourbridge where my mother's family roots were. Women and children particularly made nails while the men made knives. They were paid a pittance, of course. But where did I see that at the beginning of the Great War that the top product of the Chatellerault arms factory was swords? Pauline

Indeed nail making was women's work as you say. The Manu didn't switch to making firearms until remarkably late and their main output was swords.

My husband is into collecting knives, but he pretty much limits himself to the local ones, Thiers and Laguiole. I had never heard of knives from Chatellerault (and won't be telling him either!)