The Ligueil pulpit crucifix is a piece of folk art. The artist and date are unknown, there was nothing written about it in the past, but it is clearly a piece of French heritage. The artist obviously felt free to express himself and the work does not fit any particular tradition.

A pulpit crucifix is a liturgical object intended to hang on the wall of the nave of a church, opposite the pulpit. This one from Ligueil was probably made by an itinerant sculptor in the 16th or 17th century, perhaps copying a much older version judging by some archaic traits. 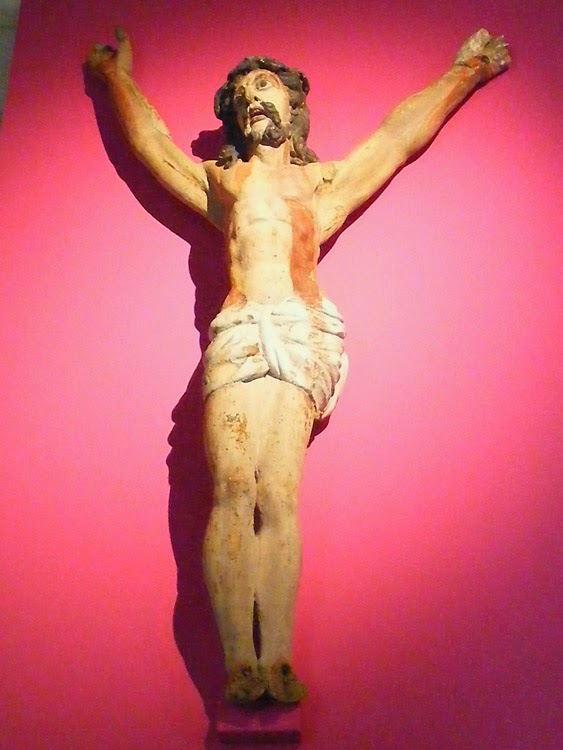 The work presents a living, suffering Christ, with emaciated, bloodied body and elongated lower limbs, casting a despairing look up to the Creator, marked by a pathos that is profoundly medieval. Yet it equally displays relatively naturalistic modelling where the sculptor has striven to describe the anatomy with exactness. The work testifies to a particular focus on nature that honors God the Creator.

This preoccupation with the natural world emerged in France in the 16th century under the influence of Italian art and is expressed here in elements such as the sensitive modelling of the legs. This part of the body contrasts oddly with the out of proportion and contorted face of Christ. What could seem like an anomaly is in reality the proof that the artist was given free rein to create something of his own, far away from the big workshops.

This sculpture was discovered recently in the roof space of the church in Ligueil. It cannot always have been kept in this church and could have come from one of the former churches in the town. It's not documented, but it is likely that at some point prior to the Revolution it was decided that the sculpture was too uncouth and it was replaced by a more modern crucifix. This relegation would have enabled it to escape the acts of vandalism that swept the region in 1784.

There is an old repair to the back, perhaps by a blacksmith, which is testimony to long use and public affection for this object before its banishment to the attic. Rich in meaning, highly individual yet at the same time representative of rustic works which reveal the thinking of the humble artists who carve wood. It is no wonder it was listed as an historic monument in its own right last year.
Posted by Susan at 09:00

Interestingly, from an artistic point.... the sculptor was very accurate with the larger head.... these were viewed from below, in the main.... a larger head reproportions the body to give a more realistic feel from that angle.... it is a standard 'trick' that shows, to me, that this sculptor was more than adequate at his job.