You can tell we're busy - I am writing little blog posts.

And today we are back in the station of Tours, which has a series of 18 painted ceramic panels decorating the walls, their purpose being to beautify the station concourse and entice travellers to the destinations portrayed. At present the panels are being conserved: each panel will cost €8000 to clean, conserve and reattach the tiles to the walls. The fundraising campaign started last year to raise some of this money. In order to publicise the fundraising, last year we started posting photos of the panels. 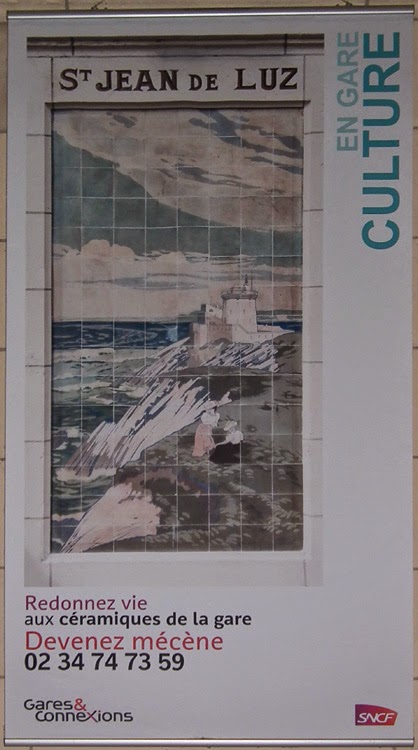 St Jean de Luz is half way between Biarritz and the spanish border. To get there by train from Tours you catch the shuttle to Saint Pierre des Corps, then a couple of TGV: the first to Bordeaux, and the second to St Jean de Luz. One day we will travel down this way: for the past couple of years it's been a bit of an ambition to visit la Petit Train de la Rhune, a tramway which take you to the top of the Pyrenees. Last year we would have done so, except stuff happened, and the year before we would have but we didn't (can't remember why, probably stuff happened then, as well).

Went to St Jean de Luz last September - great place and I think Ravel's house is just across the harbor in Ciboure. Went on the little train too - saw the wild horses. This was a fantastic experience and the train is thoroughly recommended. Did not visit Biarritz. We came back via St Emilion which is a town worth seeing and the vineyards are something else!

Well said Tim... Stuff does happen every year... We are about to fly to Lanzarote but nearly couldn't because of an eye problem which was only cleared for flight at 16:00 hrs yesterday!!

Hope work continues to keep you busy, but not so busy you can't get yourself a holiday. It is a beautiful area to visit.

Our holiday 'stuff' meant that we didn't get into Tokyo to Kyoto, but we managed to do other things instead which we wouldn't have done had the stuff not happened. Your stuff was serious stuff though so I shall keep my fingers crossed for a lack of 'stuff' to be coming your way in 2015.

Nice area to visit from Biarritz , all the way to San Sebastian in Spain.
Don't forget the gâteau Basque - both types of filling : cherries or creme Anglaise and piments d'espelette