The Oyster's World is Changing

Like most French households, oysters form part of our holiday menu. This Christmas I picked up an order of 2 dozen #2 and they sat quite happily unopened in our cellar temperature fridge for several days in an uncovered plastic box. They cost €12 and had been harvested the day before market day. The producer comes up from the coast every Saturday and does steady business all morning. 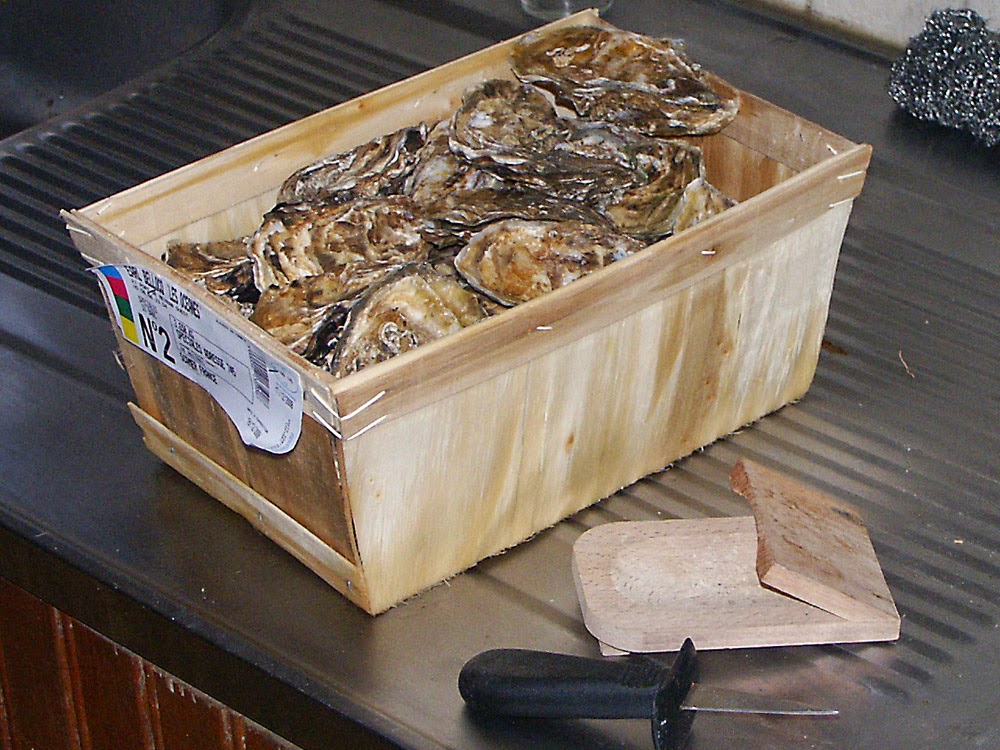 Oysters are great from a consumer point of view -- they are sustainable, being farmed in a way that doesn't plunder other marine resources, and exceptionally, they are instrumental in restoring healthy intertidal habitats, even when the oyster species is not native (most commercial oyster production worldwide uses Pacific oysters). 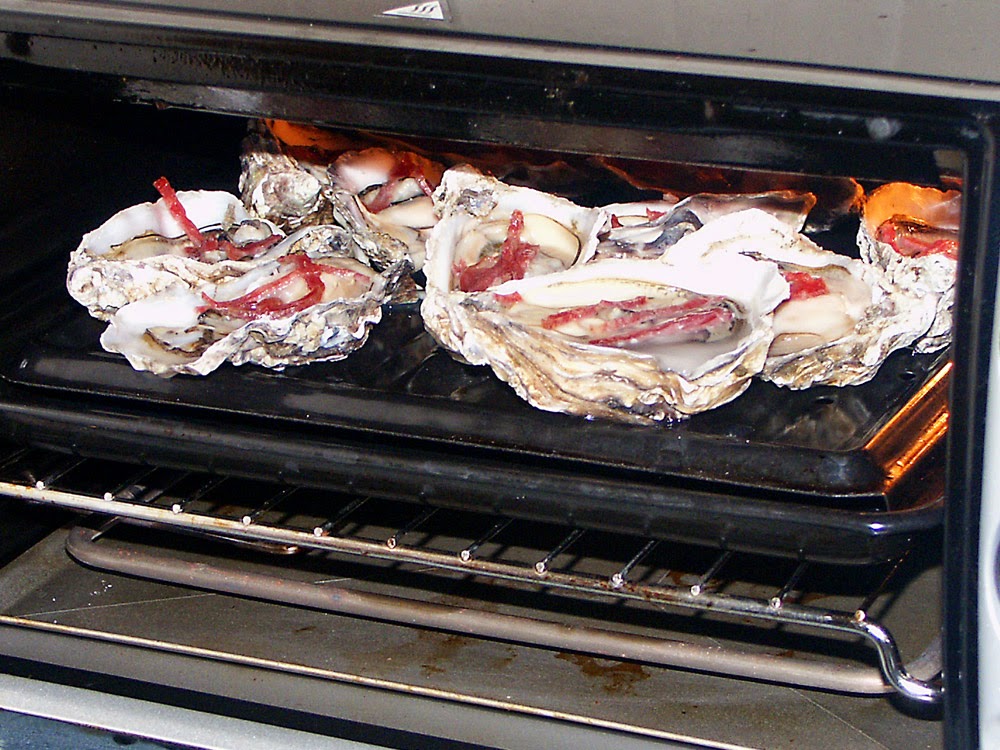 I'm glad I'm not an oyster farmer though. At the moment there is a sort of triple (or even quadruple) whammy threatening oysters.

Unfortunately, oysters have been hit by an viral epidemic with a very high mortality rate. It's known as oyster herpes and can wipe out colonies in just a few days. The virus first appeared in France in 2008, and has reduced production here by 26%. 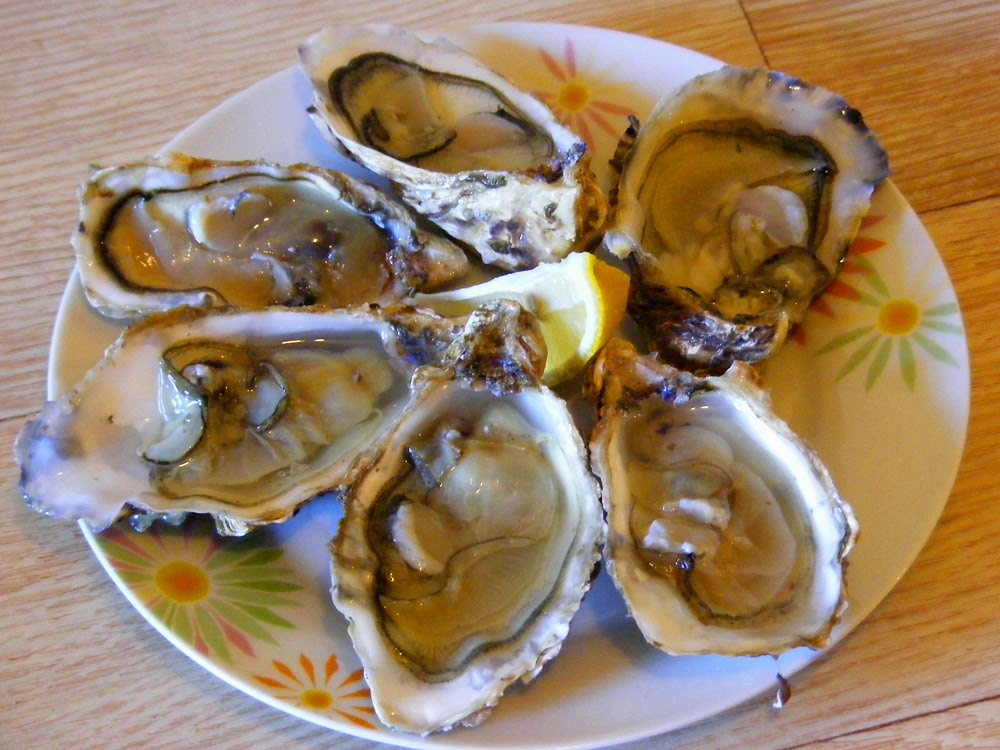 Most worrying of all, the virus only takes hold when water temperatures reach 16°C. With climate change causing globally warmer and warmer weather, the virus is set to become worse and worse. Sea surface temperatures are warming even faster than land temperatures too. 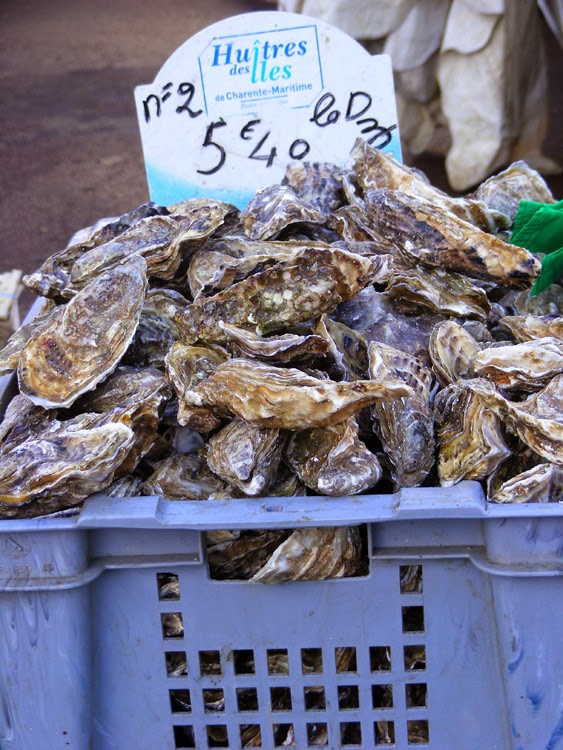 The water temperature is not the only change in the sea being driven by climate change. The sea is absorbing carbon dioxide CO2, resulting in acidification. The sea isn't turning to vinegar, but its pH has gone down sufficiently for some effects on oysters to have been observed. It's a twofold problem. The first, and simplest to understand, is that more acidic seas cause shell, made from calcium carbonate, to dissolve.

The second effect is that as well as having their shells slowly dissolved, shellfish are having to work much harder to create shell in the first place. In the case of oysters, when they are new born, they sometimes cannot make shell at a rate quick enough to gain on the rate it is being dissolved. This leaves them even more vulnerable to predation than they would otherwise be.


Farmed oyster beds on Ile de Ré, an island just off the Atlantic coast of France and a couple of hours west of us. 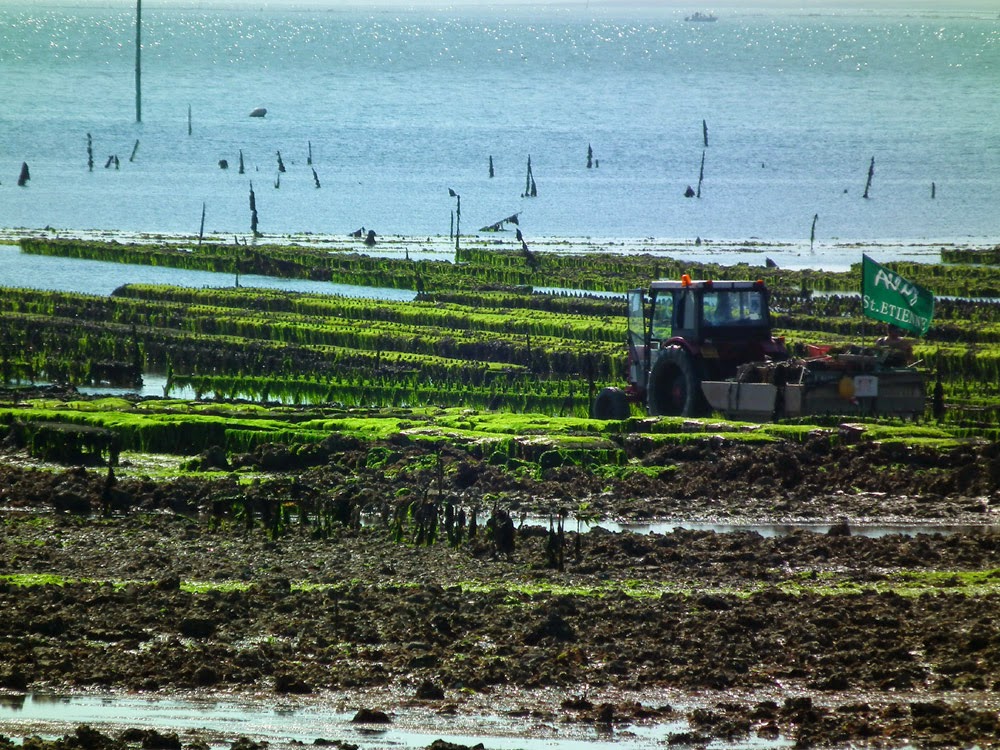 The way it works is this: 30% of atmospheric CO2 dissolves in the oceans, where it combines with water H2O to form carbonic acid. The H in pH is postive hydrogen ions. Acids release hydrogen ions into their surrounds and they bond with other molecules. One of the molecules they naturally bond with in the sea is carbonate CO3¯². This means the carbonate is not available to bond with calcium to form calcium carbonate, the key ingredient in oyster shells.

For the oyster farmers it's a looming disaster, and the oyster loving French consumer had better start preparing for something to be missing from the table at Christmas time. It's very frustrating when you consider oysters have so many positive benefits to the environment and nutritionally.

It's very cold here too, although some predicted snow has not materialized.

I've never been a raw oyster fan, so haven't followed their fate. I know a lot of Pacific Northwest (USA) Oysters have had pollution problems, but I didn't know about all of the other issues.

That soup recipe looked great -- I tagged it for future use.

Betty: They've stopped predicting snow for us, but it's obviously going to be cold for a few days at least.

Simon loves oysters and would happily eat them every week I think. I like them once in a while, and to be perfectly honest, prefer them grilled.

I hope you enjoy the soup. Oh She Glows is quite a useful site I find.

Oysters I can take, or preferably leave. I like the sound of the soup. A good winter warmer.

Gaynor: If I leave any Simon is very happy to eat them :-)

Our son and his wife hosted our family Christmas and provided a series of mostly pre-prepared mini-dishes during the day, which worked very well.

As regards focus. Long ago (nearly 40 years) our children were told that stockings were contingent on continued belief in Santa. Somehow disbelief has never surfaced.

John: Best wishes to you and your family too. I like the idea of a tapas style Christmas.

How absolutely and utterly depressing. We treat ourselves to a dozen "spéciales de fine de claires" every Saturday from the market all through winter. We also had some at Christmas but none of our offspring are really connoisseurs so we ended up eating the most!

We got two dozen fines de claires for our NYE meal, and I'm looking forward to them. Last year it was just too warm on NYE to make oysters appetizing. As you've said, oysters in France have gone through several phases. The native French species died out and Portuguese oysters were brought in to replace them. Then those died out and Pacific oysters from Japan were brought in. Where will the next ones come from? Warmer waters off the southeast U.S. coast (Louisiana, the Carolinas?). Those might do better in warmed-up waters.

Fraussie: I suspect the decline is likely to be long and slow, so continue to support your oyster farmer and someone may develop a solution.

Ken: Indeed, bringing in a different strain of oysters has been the answer in the past. There were plans to bring in more Japanese oysters, but the tsunami put an end to that. I expect there will be attempts to raise them in tanks where you can control the pH, but that's expensive and not so good for the environment. Here's hoping for a super oyster!

Are your seafood vendors at the Preuilly market Magalie and Olivier by any chance?

Ken: No. His name is Bruno. I don't know what she's called.