The Toadstool in the Fairytales

You've all seen this mushroom, even if not in the wild. It's the one in the illustrations of your childhood fairytale books. It's called the Fly Agaric Amanita muscaria. It grows in the forests here in association with conifers. The mushrooms and the trees form a symbiotic relationship. The mushroom plugs its mycelia into the tree roots and allows the tree easy access to nutrients from the soil that the mushroom can take up but the tree roots are less efficient at processing. In exchange the tree sends sugars which it has produced by photosynthesising, down to the mushrom from its leaves. 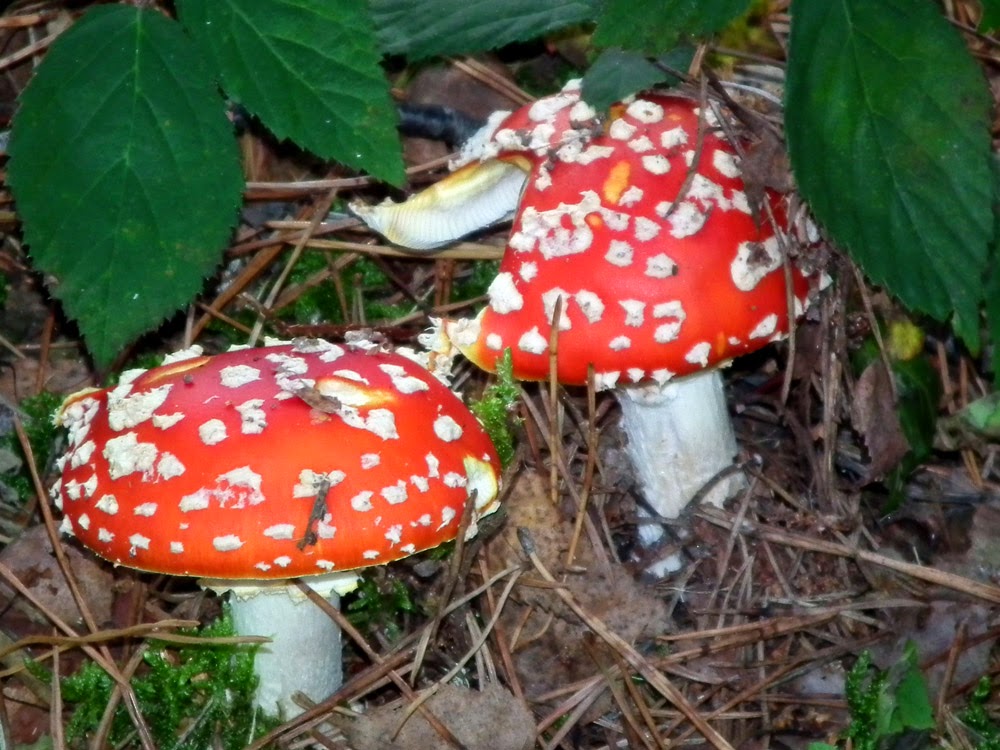 Fly Agaric has a red (or sometimes orange) cap, white gills and white flakes on the cap. It and several of its kin contain hallucinogenic chemicals and neurotoxins in potentially lethal quantities, although the toxins can apparently be at least partly neutralised if you cook the mushrooms in water (the idea is the chemicals are water soluble and you discard the water) and it looks like no one in living memory has died from ingesting it. Drying the mushroom on the other hand may increase its toxicity and the effectiveness of its psycho-active chemicals. It is a bioaccumulator of the metal vanadium. No one knows the biological reason for this, but it is possibly connected to toxicity.

Its name may come from the practice of soaking pieces of the mushroom in milk to make an insecticide, a custom that dates from at least as early as the 13th century in northern Europe. However it is uncertain whether this actually works, as an 18th century French mycologist tried and failed to kill flies using this method. Flies seem to be attracted to it, but some species use the fungi as a larval host, so it seems unlikely to me that it is an insecticide.

Another theory on the origin of the name suggests that the flies are those that were believed in medieval times to get into your head and send you mad. The species has many names in European regional dialects that suggest the 'fly' is in fact 'fool', meaning that it is an inedible lookalike for the rare but desirable edible species Caesars Mushroom Amanita caesarea. On the other hand Fly Agaric is often found in the same locations as the highly desirable Cep Boletus edulis, acting like a beacon to mushroom foragers on the look out for ceps. Animals as diverse as flies, cats, dogs and reindeer appear to be attracted to the mushrooms, with varying effects after ingestion ranging from severe poisoning to merry intoxication. 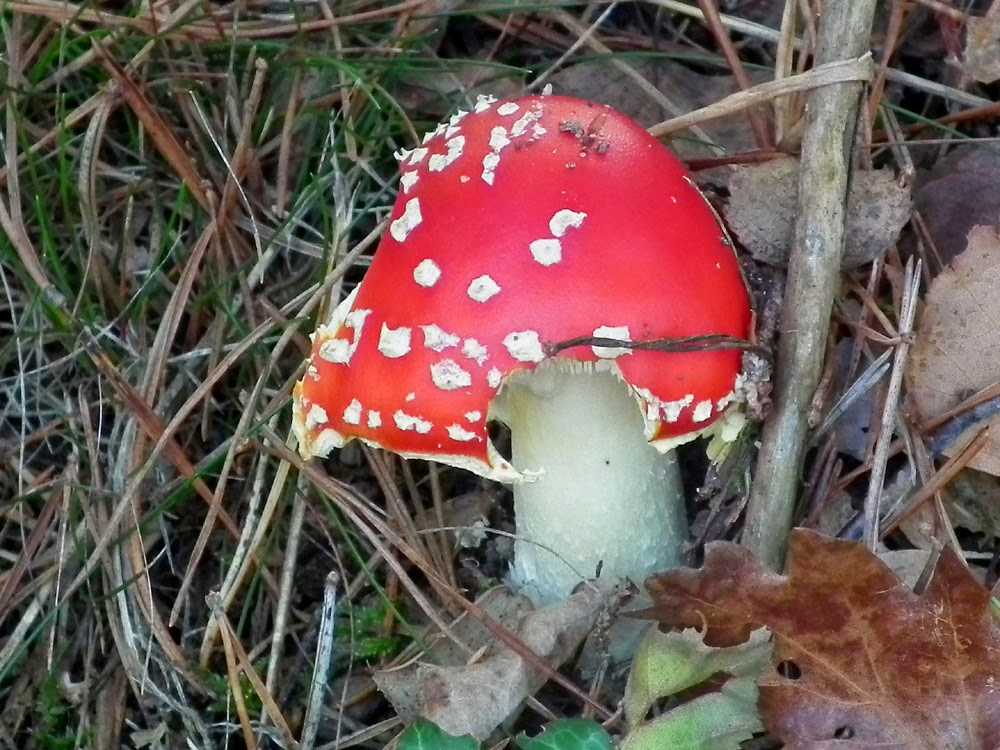 Shaman used the mushroom to see visions and aid religious trances. They didn't necessarily consume the mushroom directly, but may have boiled the mushrooms then drank the water, perhaps as a way of standardising the dose. This is a wise precaution, as although on average a single Fly Agaric is sufficient to be effective in an adult human, and the consumption of 15 has been calculated as a lethal dose, in fact the quantity of active chemicals can vary 10 fold, depending on season and locality. There is no antidote, and treatment for poisoning is mostly a matter of waiting for the effects to wear off. It isn't considered a reliable recreational drug as the effects are notoriously variable. It seems those using it today in the remote places where it is part of traditional life mix the dried powdered mushroom with water and drink the resulting potion. Apparently it induces buckets of vomit as a side effect to the trip. 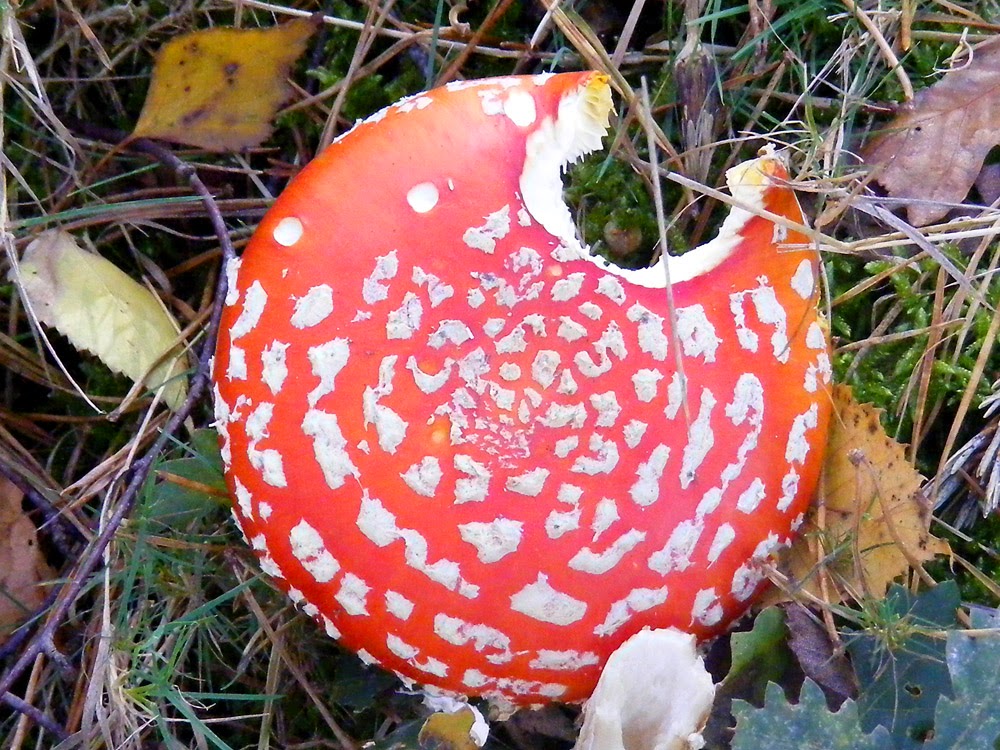 Although the species is native to the Northern Hemisphere it has been introduced to Australia along with Monterey Pine Pinus radiata, which is widely used in commercial plantations. There is some concern in Australia, as it is forming new associations with native trees and possibly displacing native Australian fungi species.

So Susan, I remember once you told me you had never seen these mushrooms. You have now, I guess. Right?