Our friends Jean Michel and Rosemary have made their own foie gras for a number of years. These days they use a super simple curing method which means you don't have to do any tricky cooking of the delicate foie. 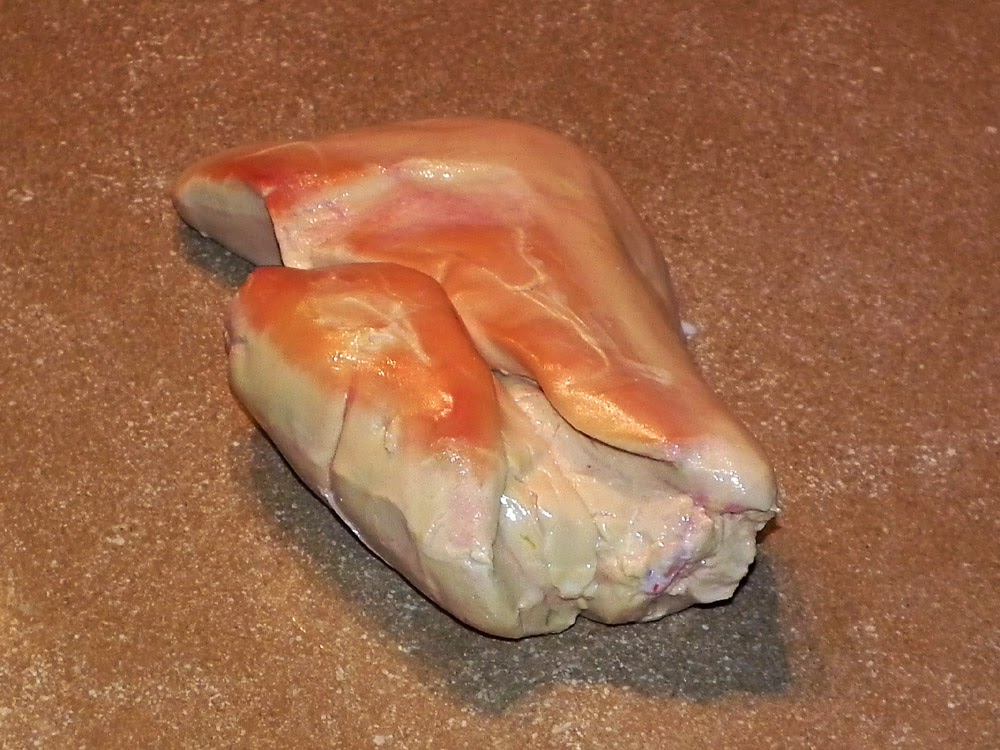 They offered to show us how to do it and we arranged a date for Wednesday 10 December. I had previously ordered the foies from our local producer, Maison Perrin near La Celle Guenand. I picked the livers up on Monday, the day the ducks were slaughtered. For foie gras the ideal is to prep them as fresh as possible. Jean Michel and Rosemary are very particular about their foie gras and hadn't used Maison Perrin before. Thankfully they commented favourably on the good firm texture and were obviously happy with the quality.

We arrived at Jean Michel and Rosemary's at 11 am and the first step was to soak the livers in milk, or a mixture of milk and water. They float, so weighing them down or turning them over occasionally is a good idea. Jean Michel and I covered the work tables with plastic because things were expected to get messy. 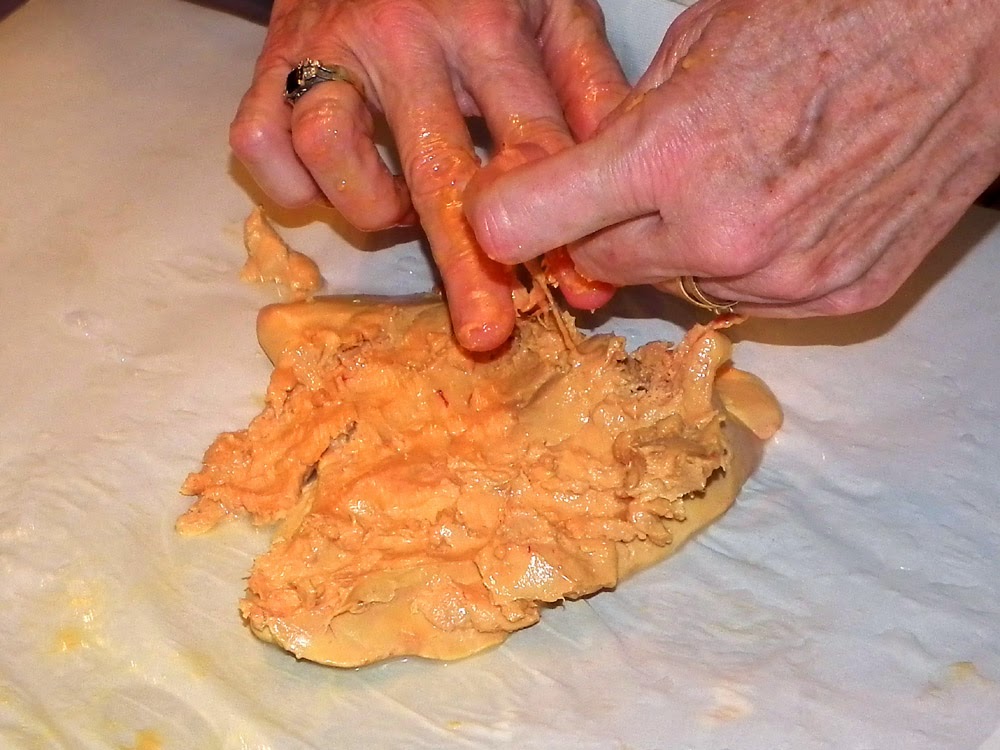 While the livers soaked for a couple of hours we had lunch, joined by Jean Michel and Rosemary's friends and neighbours Paul and Françoise. I'd bought a liver for them too and they were going to join us for the workshop. Lunch was delicious -- scallops in shallot and mushroom sauce by Paul, chicken chasseur by Jean Michel and eccles cakes by me. Jean Michel kept us well supplied with a really interesting stream of carefully chosen wines for each course -- sparkling Vouvray for the apéritif, a most unusual 2009 vintage wine from the Jurançon region, made from very late harvest petit manseng grapes, then a red which I seem to remember was Italian, but I could be wrong.

After lunch Jean Michel brought in some granite slabs that had been sitting out in the cold and placed them on the table. We were directed to sprinkle our alloted slab with iced water then place the foie on them 'upside down' (the liver does have a fairly obvious upper side, which is smooth and intact, and lower side, which is more broken up or divided looking). The two lobes, one small, one large, of the liver must be separated and the internal veins extracted. 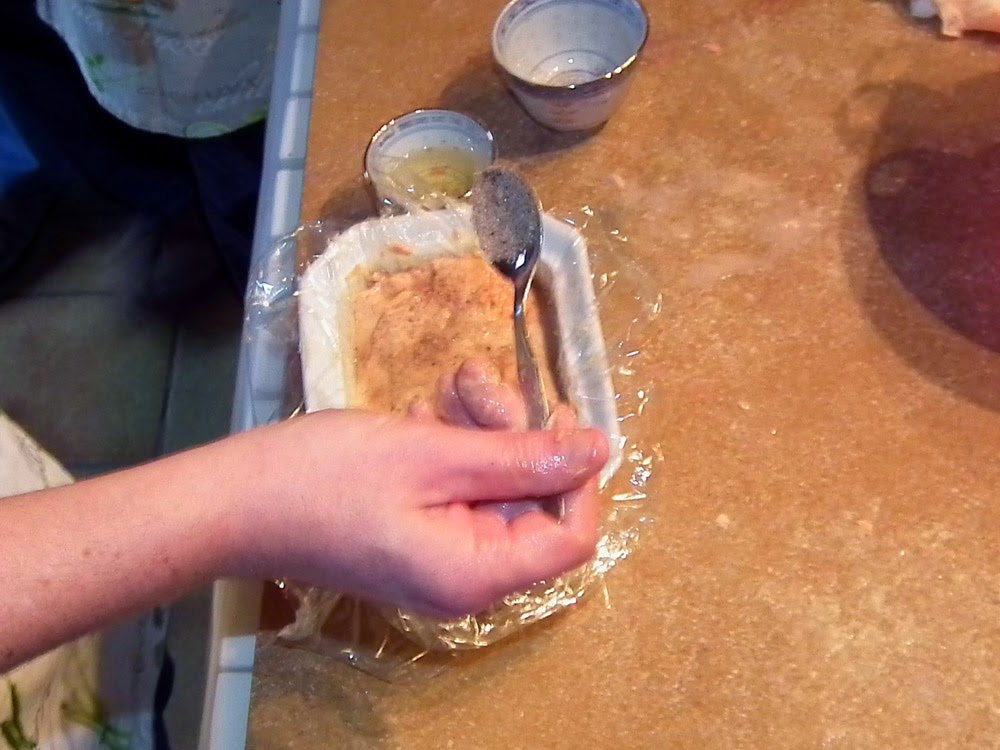 This is the trickiest part of the whole process. You have to carefully probe the liver and lift up the veins for their full length. There are two in each lobe, situated more or less along the middle and one above the other. Each of them divides into several Y branches as you follow them along. The trick is to lift them for as much of their length as possible without breaking them before taking them out. You can burrow into the foie and dig about, but try to keep the smooth upper surface flat on the bench and unbroken. Once you've carefully checked the liver for any stray vein remnants it's time to season and form it. Each of us got a lobe to work with, so taking photos also got a bit tricky. The camera did end up smeared with foie gras at one stage.

Rosemary doled out sweet Vouvray wine and a spice mixture to precise proportions calculated as a ratio of seasonings to weight of liver. You can see the recipe for the spice mixture and how to calculate the quantities on her blog here as well as an excellent step by step set of instructions with photos. We pushed the lobes back into shape and sprinkled them with some dry seasoning then some wine. The small lobe was then pressed into the bottom of a cling film lined terrine, with a healthy dose of seasoning and wine. Then the large lobe was carefully placed on top, turned over so it had its smooth side uppermost. The remainder of the seasoning mix and the wine went on and everything was pressed down firmly.


Paul about to roll his foie gras in gauze. 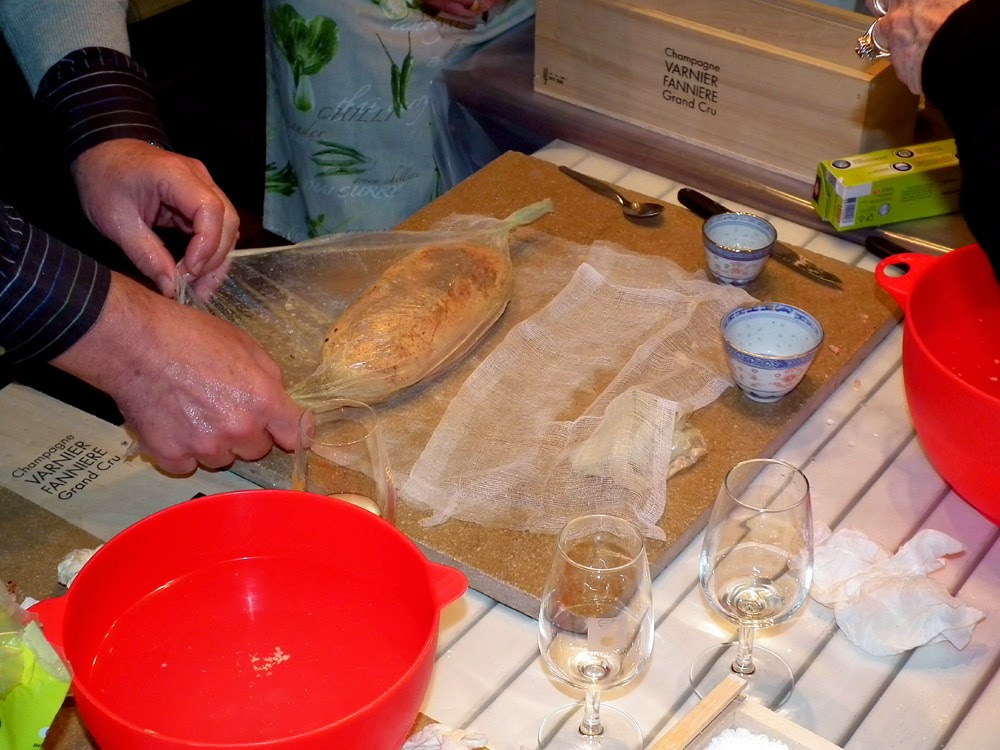 Now for wrapping the foie up in gauze. Rosemary supplied gauze dressings from the pharmacy, which we laid out on the granite, overlapping to get a large enough sheet to roll up each foie. The foie was carefully lifted from the terrine using the cling film and placed on the gauze. Jean Michel demonstrated how to roll the foie one way and push back the cling film whilst simultaneously covering with gauze, then repeat in the other direction. Once encased in gauze the foie is patted and the gauze twisted at the ends to make sure it is all secure and solid.

The next step is curing the foie gras in salt. Rosemary kindly supplied a wooden champagne box and we tipped about 750g of coarse salt into the bottom. On top of this went our foie bundle, then more salt until the box was full and well packed down (it takes about 3kg of salt in total). Once Jean Michel was satisfied the lids went on the boxes for transportation home. The foie stays in the salt, at cellar temperature (10° - 12°C) for 17 hours, which we calculated was 8 am the next morning. We don't have a cellar, but I run one of our fridges at 12°, so it went in there once we got home.


The mummy that emerged next morning. 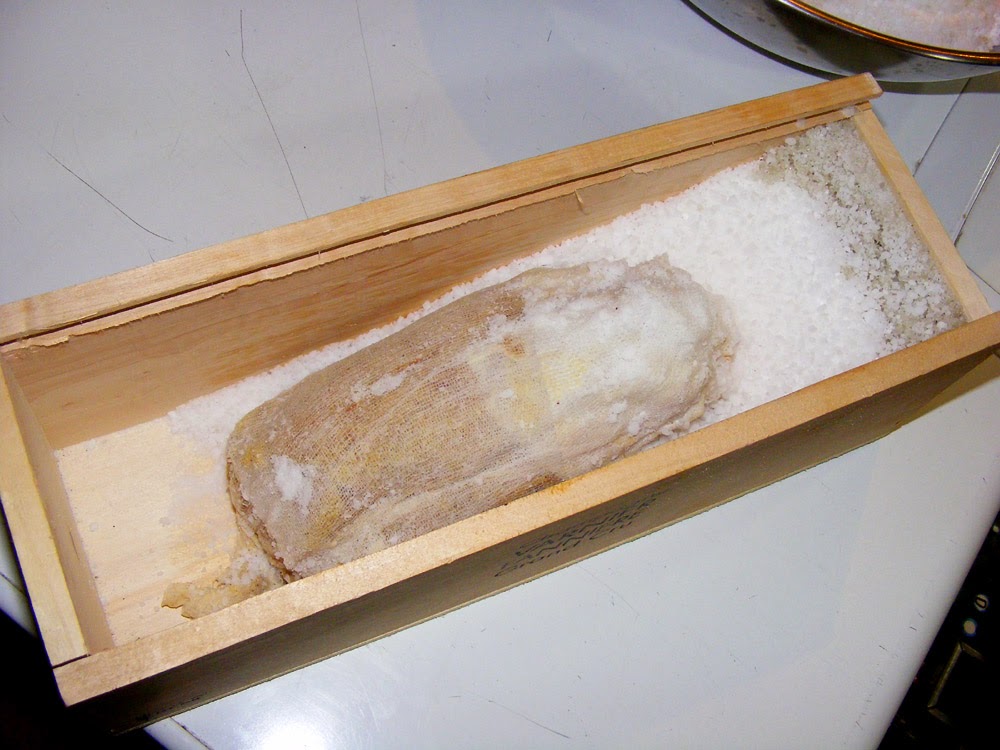 The next morning I excitedly tipped off the salt. The foie had shrunk noticeably and looked rather mummified. I suspect this is good. I brushed off the salt and peeled off the gauze. We are sharing our foie with Niall and Antoinette, so I cut the mummy in half and pressed each half into a small terrine. They went into the cold fridge (2°C), carefully covered in cling film, where they need to stay for 10 days before we can eat the foie gras.

I took a sneaky taste of the foie gras when I was transferring it to the smaller terrines and it is definitely melt in the mouth. As Rosemary notes in her post, with this method you don't lose any of the fat, and fat, after all, is what it's all about (foie gras = 'fat liver'). Our 504g fresh foie gras cost €28.70 (compared to about €35 for a ready to eat one in the supermarket).


Cut in half ready to be pressed into two small terrines. 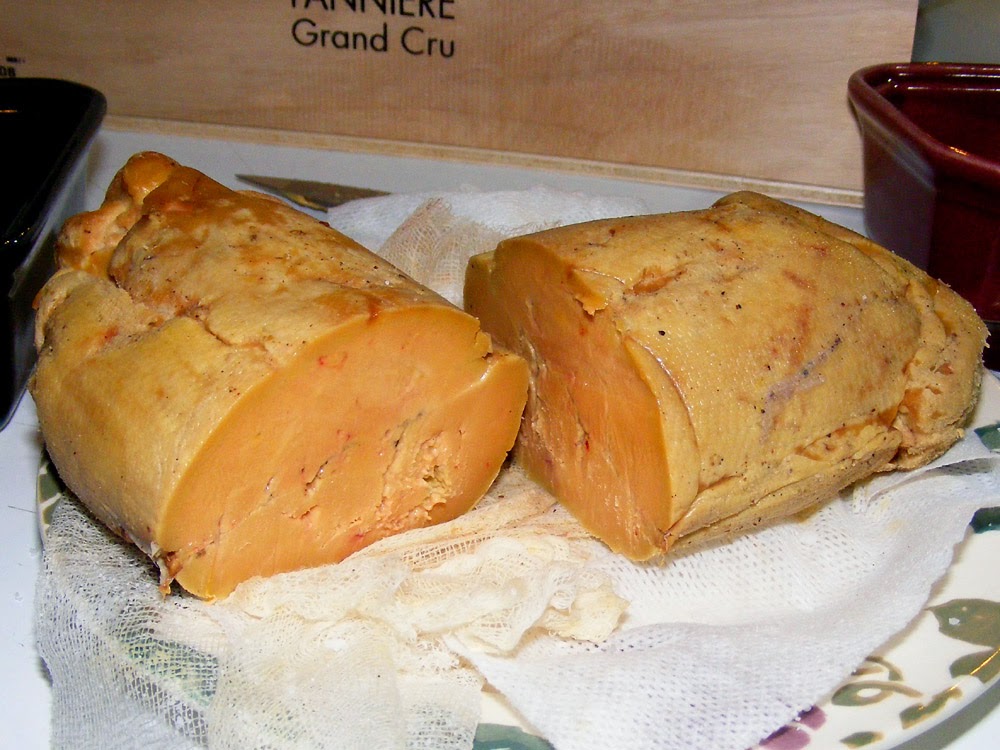 We had a fantastic time, with great company and food, and learnt a lot. I would definitely not hesitate to buy a fresh foie gras and prepare it myself again. We greatly appreciate Jean Michel and Rosemary passing on their expertise and hosting this fun day.

For those of you interested in the ongoing ethical argument about foie gras, you may like to read this detailed, informative access all areas article on Serious Eats about a visit to an American foie gras producer. The ducks at Maison Perrin, where I bought ours, are free range.

******************************************************
Preuilly News: My source for news of the other end of town has emailed me to say that a hole has been dug in the middle of the Carroir de l'Ormeau, in readiness for planting an elm tree. This is, as I understand it, despite the fact that this action did not appear to get proper approval from the local council. It seems the mayor is going ahead and doing it anyway, as predicted. I have absolutely no idea what the background to this particular political shenannigans is and await further instalments with some curiosity.

The local fire brigade has had its end of year get together. The départmental force has been restructured and instead of having each commune with a brigade, they have been amalgamated into 3 groups. Preuilly is part of the southern group.

Preuilly has 21 firefighters, all volunteers, and there have been no new recruits this year. The brigade has 7 vehicles and a boat. They assisted 137 people in 2014, attended 6 fires and 35 other emergencies. They were unable to assist in 31 requests for help due to lack of resources. Several firefighters got promotions or awards for long service at the ceremony. Overall the départment has 1950 volunteer firefighters, a new training centre and a budget of €29 million. The local authorities are keen to encourage new businesses to the area, as it is one way to gain potential new recruits (as well as the other obvious benefits to the area). There is going to be an outreach campaign to colleges to encourage young recruits. At the moment there are only 670 in training and this isn't enough. The meeting ended, as most things in France do, with drinks.
Posted by Susan at 09:00