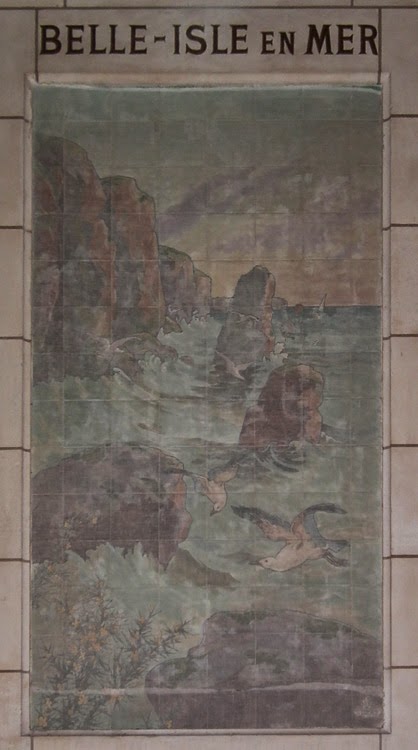 The station at Tours has a series of 18 painted ceramic panels decorating the walls. Their purpose is to beautify the station concourse and entice travellers to the destinations portrayed. At present the panels are badly in need of conservation and a crowd-funding campaign is underway to raise the money to save them. Each panel will cost €8000 to clean, conserve and reattach the tiles to the walls. To learn more about the restoration fund and the panels themselves go to Ulule Gare Tours (in French).

We thought that it might be fun to show one of the panels every now and then, with the timetable information for how one gets there from Tours today. Looking at the timetable it is clear that you might as well start your journey at Saint Pierre des Corps these days rather than in Tours if you want to get to Belle Ile en Mer (note the modern spelling, which has lost the 's', to be replaced by 'î'). From Tours you just take the shuttle to Saint Pierre de Corps and change to the regional train to Nantes, then change again to get to Auray. From Auray it's an hour on the bus to Quiberon. 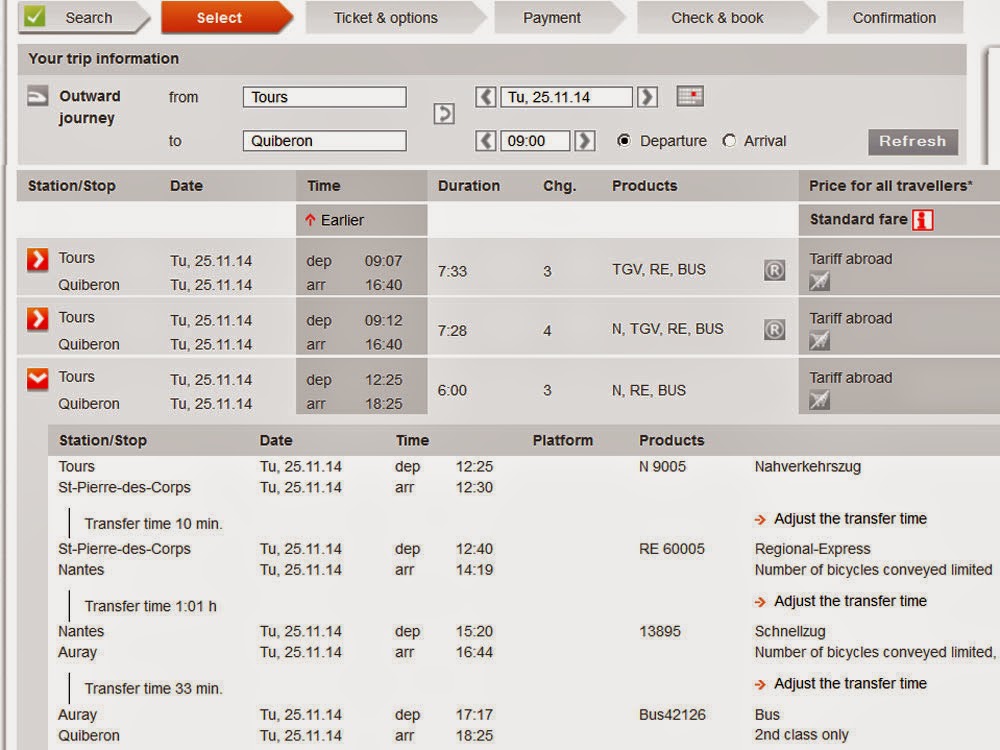 Fifteen kilometres off the coast from Quiberon, Belle Ile en Mer is the second largest of the islands off the Atlantic coast of France. Like the other islands it caters for tourists who want a truly relaxing and peaceful break, with lots of nature reserves, walking and cycle paths, water sports. There is a big opera festival every summer. We've never been there, but if it is anything like Ile de Re, we would highly recommend it. There is no bridge, you catch a ferry to get there.

The independently wealthy 19th century Australian artist John Russell lived there with his beautiful Italian wife and often played host to Claude Monet. He introduced Henri Matisse to the works of Vincent van Gogh, who was also a friend, and although Russell himself remains virtually unknown as an artist, in his day he was highly influentual amongst this group of French painters.

*******************************************
I'll Ride With You: I'd like to express my admiration for the women who started this social media campaign. I remember after the Underground bombings in London on 7 July 2005 how young dark bearded men with backpacks getting on public transport made others nervous (including me). No matter how much intellectually I knew these were respectable young men going about their daily lives just like me, catching the Underground in the weeks afterwards made everyone suspicious and edgy. Especially if like me you caught one of the bombed routes regularly and missed being blown up by about 10 minutes. Once that involuntary second of suspicion on sighting a young Muslim man had flashed through my head, I recognised how courageous the people were. It never occurred to me to step up to one and say so though -- in London one simply doesn't talk to strangers on the train.

"You can see a patch on this panel where the conservators have already done some work."...
Er...no, I can't!
Wasn't that last weeks one?
This one is completely covered in the gauze...
and it looks like they ran out just before the bottom and had to add another strip.

Seven and a half hours...
I wonder what it took when the "poster" was originally tiled in place?

"... in London one simply doesn't talk to strangers..."...
and not just on the train...
on the bus, the pavement, in pubs and restaurants...
and that stretches way out into the suburbs!!
Everyone is "private" and "suspicious" of their neighbour.
The further South you go in the UK the worse it is...
in Wick & Thurso you get offered drinks and chat away..
Inverness & Glasgow, everyone talks to everyone...
in Leeds, Huddersfield and Bradford most people talk...
in Lincoln it is difficult to start a conversation...
best to listen to another and throw in a remark or two...
until you are included...
by Watford, forget it...
Harrow, and people move closer together if a stranger walks in...
in London you need to have visited a pub, regularly, for weeks before people reply...
in Guildford...
well, you need to have been born there!!

I really like the "#I'll ride with you" idea...
I think it might well be helped by the "forwardness" of Australians...
but I'm not so sure that it would work too well in London and the suburbs.
There is, I am sorry to say, just too much criticsm and animosity towards "incomers"...
of all races, creeds and colour...
in so much of the UK...
usually engendered by people who think that those people are taking their jobs...
which are very often jobs that they would have absolutely no intention of doing anyway!!
It happened in London with the great influx of Carribean people just after the war...
the people who, I must add, actually kept the public transport system running...
because locals thought it was beneath them!

I've lost a paragraph there...
After the Carribean para it should read:

"It started with Jewish money lenders...
centuries before...
and probably with other races before that...
and continues to this day...
it is both a small island...
and local jobs for local people...
mentality, regardless of the fact that the UK is possibly one of the biggest melting pots of racial type in the world."

Tim: Sorry - it was last weeks. I've removed the sentence.

Your view of Australians is charming but rose tinted I fear. That forwardness can just as easily be nasty and judgemental, so I am not surprised the woman on the train was removing her scarf. I've had complete strangers comment unfavourably on my apparel in the street more than once in Australia, so imagine what it would be like if you could tack on religious prejudice to that as well.

Ah... could it be expat Australians who seem nice?
You one and three-quarters are only one third of the Australians I've known for a period of time...
and the others were CAMRA members...
so it could have been the beer talking!!?

Perhaps the campaign will make people think a little more...

Tim: I think expats have as much common with one another as they do with their compatriots. And your Aussie CAMRA friends were probably just so grateful to have found some decent beer -- you certainly can't in Australia!

There is some very good beer made in Australia...
but I think that it is all exported!!
I am "of an age" to have tried Fosters when it was imported in rather squat pint cans...
and tasted much better than British offerings of the day [Ind Coop and Grotney's to name a couple]...
then, like Cobra, started to be "brewed under licence" and rapidly became Fester's...
a watered-down version to be served so cold you can't taste that it has no flavour.

Coopers from Adelaide are one of my favourites...
their Best Extra Stout is a cracker...
as is their IPA-styled Original Pale Ale.
I also quite like Victoria Bitter...
long available in the UK...
but now mainly through independant retail outlets and the foreign beer counters at beer festivals.

Tim: I doubt if I ever drank Fosters in Australia -- I don't know anyone who did. Coopers always used to be the best of the boutiques, but is not so boutiquey and bettered by some small brewers now. VB is the best of the industrials except for Tooheys Old. But none of them hold a candle to good British or Belgium beer.

VB did when all we could get was "industrial sewage" and poorly kept Bass...
for the main part, I used to drink Dublin bottled Guinness...
still on the yeast and wonderful.
Guinness ran an advert when I was around 18, rising 19, and had started brewing my own...
it was for a tanker load...
but in pecks and bushells, etc...
my Mum had an old school converter booklet and I used that to convert the advert and then scaled it down.
Using bottled Guiness yeast as a starter, I used to make a superb stout.
Didn't taste like Guinness mind...
but I was using the ingredients I could get from the homebrew shop...
but it was still a very respectable stout with a rich creamy head!!
Some of the best Guinness around these days is the Belgium brewed stuff...
I've just finished a glass...
rich and creamy...
all the supermarkets sell it...
in glass bottles at 5%ABV...
not 4.2%ABV that comes in tins from....
Dublin...
and tastes metallic and very rough...
but fine for cooking!!
"And so to bed..."
as Sam'l Peyps was want to write.

Tim: I find stout a bit scary. I have got a bottle in the fridge, but will most likely use it in cooking.

I actually travelled from Tours to Belle-Isle-en-Mer, by train, in 1980. I was at my university's Tours campus, and one of our teachers lent us a key to her vacation home on Belle Isle. I know that we took the train all the way to Quiberon. I clearly remember hanging out in a café there after arriving by train. After that, I think we had to catch a boat, then we hitchhiked and somehow managed to find the house.

It is the sort of thing that seems impossible to do now without Googlemaps, cell phones and so forth.

By the way, we usually ended up really leaving from St Pierre des Corps too, even "back then."

Betty: thanks for the account of actually doing the journey.