Occasionally we have posted old photos of Preuilly sur Claise (here and here, for instance). Most of the old views have come from Delcampe, a worldwide web site that until two weeks ago we thought just traded in postcards.

As you probably know (if you have been reading the blog for a while), one of our buildings is the old Poupineau-Bardon grain merchant's barns. We have been looking into the history of the building and its surrounds, so occasionally "Poupineau-Bardon" gets typed into our search engine of choice. Imagine our surprise when it not only returned some new results, but that some of those were links for documents for sale on Delcampe. Bidding started at €1.61. 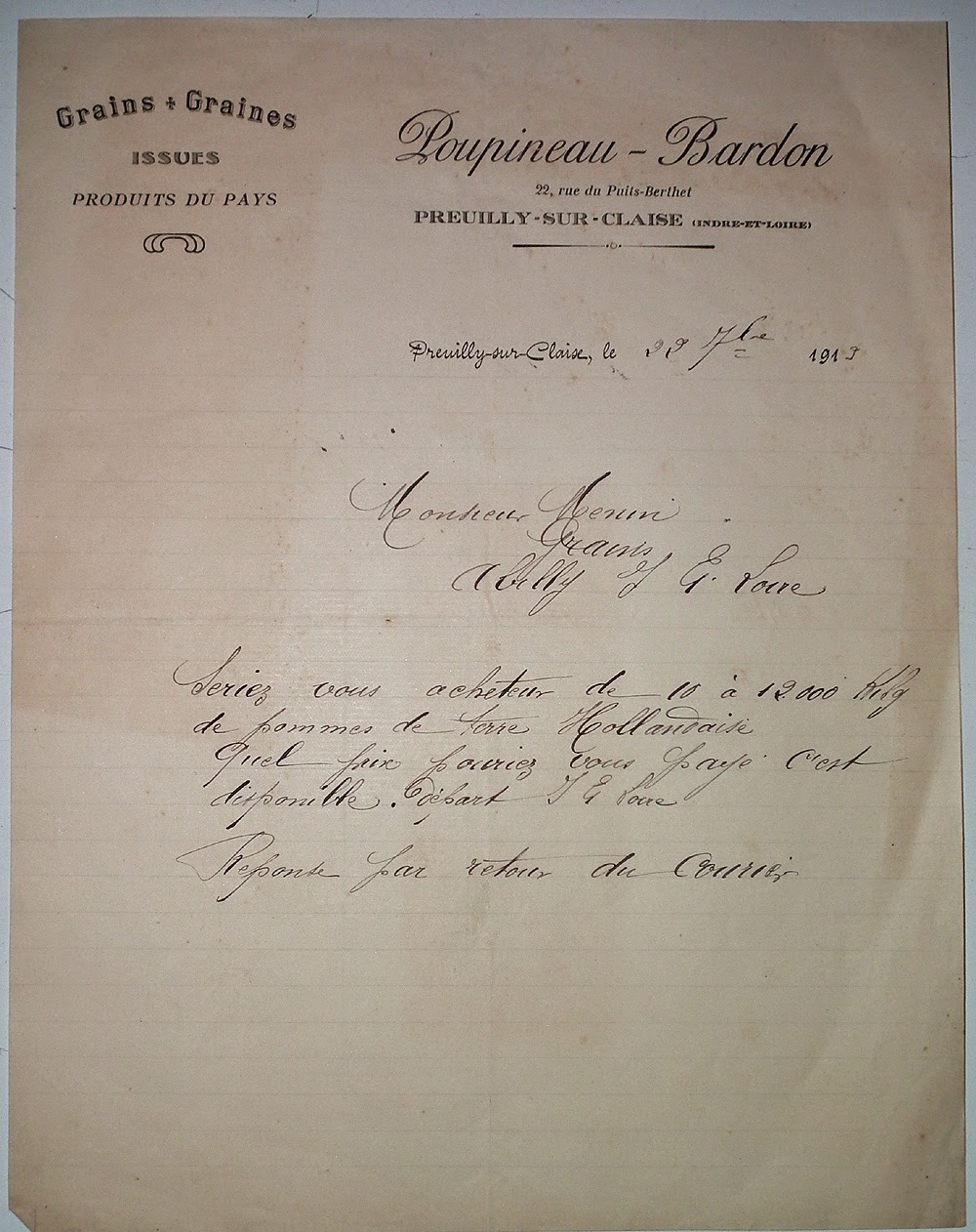 Would you be interested in buying 10 to 12 000 kg
of Dutch potatoes?
What could you pay? They are
available. Shipped from I[ndre] et Loire.
Reply by return message 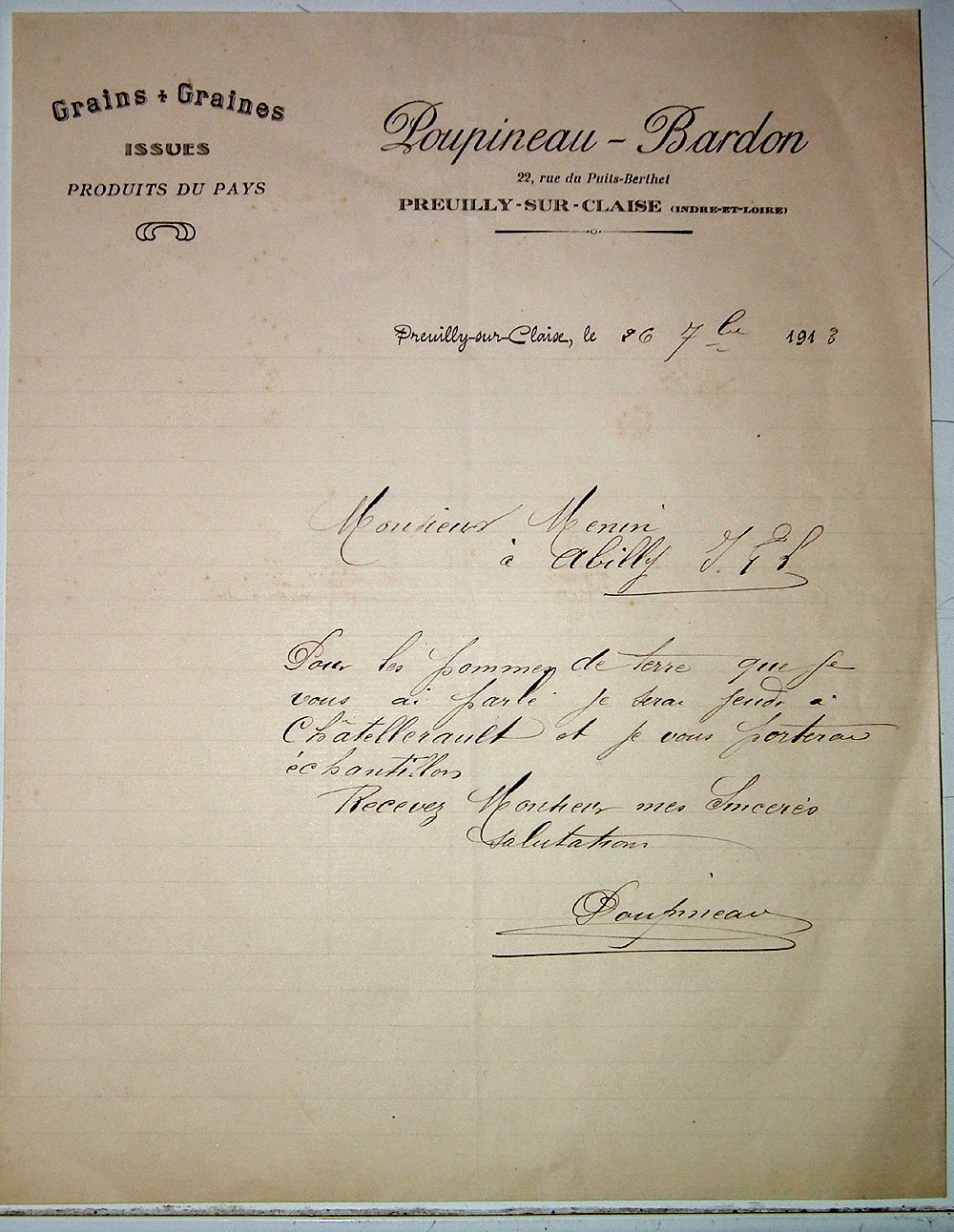 Regarding the potatoes I
told you about, I will be in
Chatellerault on Thursday and will bring you
a sample.

You can click on the photos to see the documents full sized.

These documents are from the era of the accounts books shown to me by the son of the last member of the family to run the business which I wrote about here. You can see a photo from 1939 of Désiré Poupineau and Aimée Bardon in this post.

Because these are pertinant to us, we really felt that we had no option but to bid. We were the only bid, so each letter cost €1.71, which with postage came a grand total of just over 4 euros.

UPDATE: In February 2015 we got an email from the grandson of Louis Menin, the man Désiré Poupineau was trying to sell potatoes to. He very kindly sent us a photo of his grandfather's account book showing all the transactions the two men made between 1911 and 1922. Over those years Louis Menin regularly purchased legume seeds (vetches, lucerne and sainfoin), oats and potatoes from Désiré Poupineau. However, it seems that he did not take up opportunity to purchase the potatoes Poupineau mentions in his letters of July 1913 as there is no entry that would fit the dates of the correspondence.

***********************************************
Preuilly News: The local council is currently working on various traffic calming projects. We are getting a series of chicanes on the Loches road as it leaves Preuilly. Traffic lights were trialled a while ago and were not practical. Our street is going to be one way from the top to a side road in the middle, while the bottom remains two way. We think this is an excellent idea and will stop people wizzing past our front window at breakneck speed. A speed bump was proposed but thankfully rejected as being too noisy for the residents. And finally, there is a controversial proposal to plant an elm tree in the middle of the intersection at the top of rue des pavillons. The residents oppose it but the mayor appears to be dead keen. A friend sent me a photo of the intersection yesterday -- it seems some wag has positioned a tiny Christmas tree on the spot.

The council would dearly like to create a bypass for heavy vehicles, who currently rumble up and down the narrow main street. They've introduced parking restrictions which have helped a bit, but they've recently been told that a bypass is not on the cards. National funding for major roadworks has been allocated up to 2025 and with a bypass requiring a new bridge across the Claise and the agreement of neighbouring communes, there doesn't seem much hope. So we are stuck with logging trucks, B-doubles full of turkeys and all sorts of machinery and goods being transported through town and unwary drivers who don't anticipate causing daily traffic jams.

Apple pie, with the last of our homegrown apples and homemade sweet short pastry from the freezer. I made a spiced cream cheese to dollop on the pie, with an added touch of a wonderfully appley Calvados that was a gift from our friend Liselle. I made some more sablés from the leftover pastry.

Quesadillas, which until recently we had never heard of, but now are completely addicted to. We buy the big packs of Turkish flatbreads at Auchan rather than the expensive packs of a measly 6 small tortillas.

It would be interesting to know if he did buy the spuds!!!

Colin: And what he paid for them.

That sort of thing is lovely...
it puts you in contact with the people who have "gornbefore"...
we found the last milking records for here...
in a tin in the old kitchen...
we treasure them...
for the same reason, I feel, that you felt compelled to bid.

Your street...
one way...
which way...
up from the old chapel...
or down from the town market triangle?

Quesadillas sound like Mexican canalone... crossed with a toasted sandwich...
I think I'll get a couple of torties out to thaw....

Tim: You will not be able to enter the street from the market end.

ie:UP
That IS annoying...
usually come at you from that end...
so it is "join the traffic jam" and crawl through town and back up...
hey-ho!

What cheese do you use in your quesadillas?

Sounds good. Do you buy cheddar at SuperU? Cantal would be good, or even something like Ossau Iraty.

Ken: The cheddar comes courtesy of our various English friends. Ossau Iraty is an excellent suggestion.