The servants dining hall in the basement kitchens nearly always has the best floral decorations. 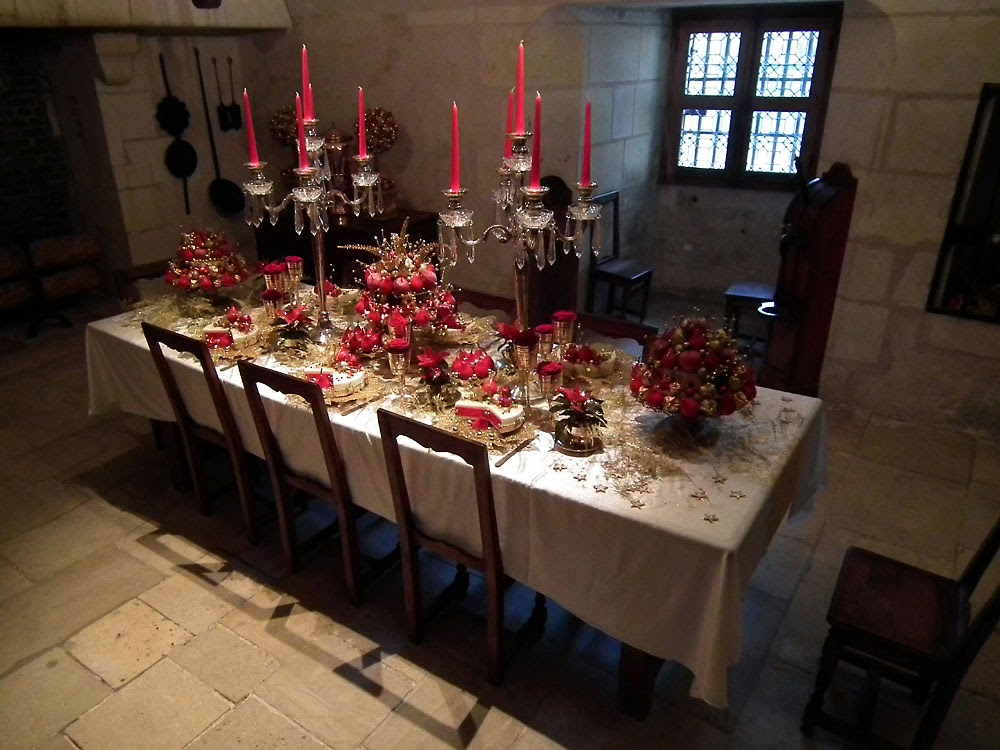 Christmas Day is usually a bit dull. There's nothing worth watching on the telly, nothing to do because everything is closed or the weather is terrible and apart from a special meal it's all a bit pointless.


Simon was the only person in this room when he took the photo. 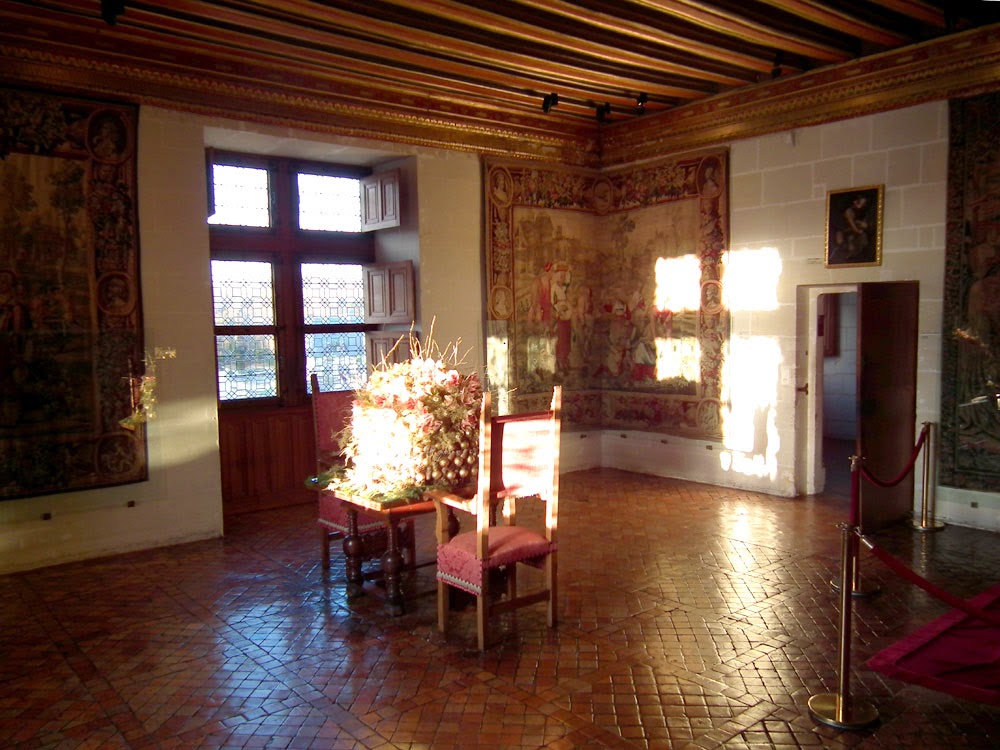 This year Simon decided that we would go out for Christmas Day.  We mentioned it to friends Niall and Antoinette and they thought it was a great idea. They are in the same situation as us -- no little kids to focus the event on, but you are supposed to treat the day as special and fun nonetheless.


The main Christmas tree, in the long gallery, a confection in sparkly white and gold. 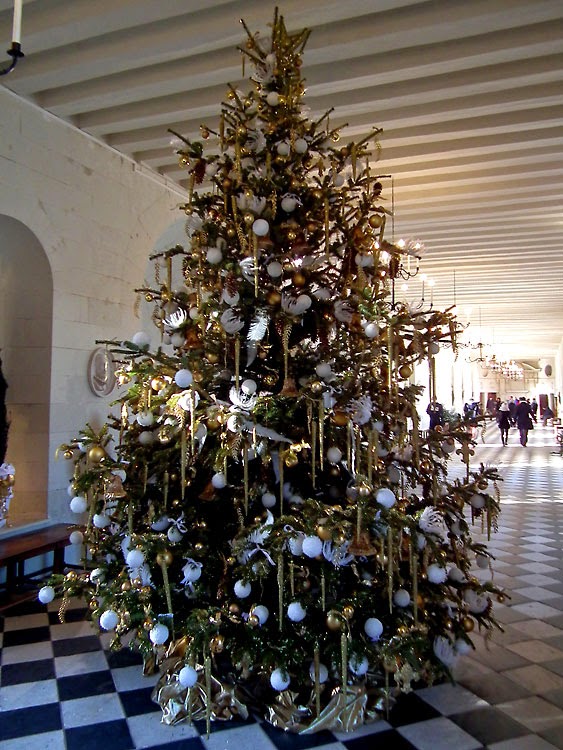 In fact, not everything in France shuts down for Christmas. A couple of chateaux are open and the trains run. We decided to go to Chenonceau for the afternoon.


Christmas Day was an unexpected and welcome break in the dreary weather we have been having. 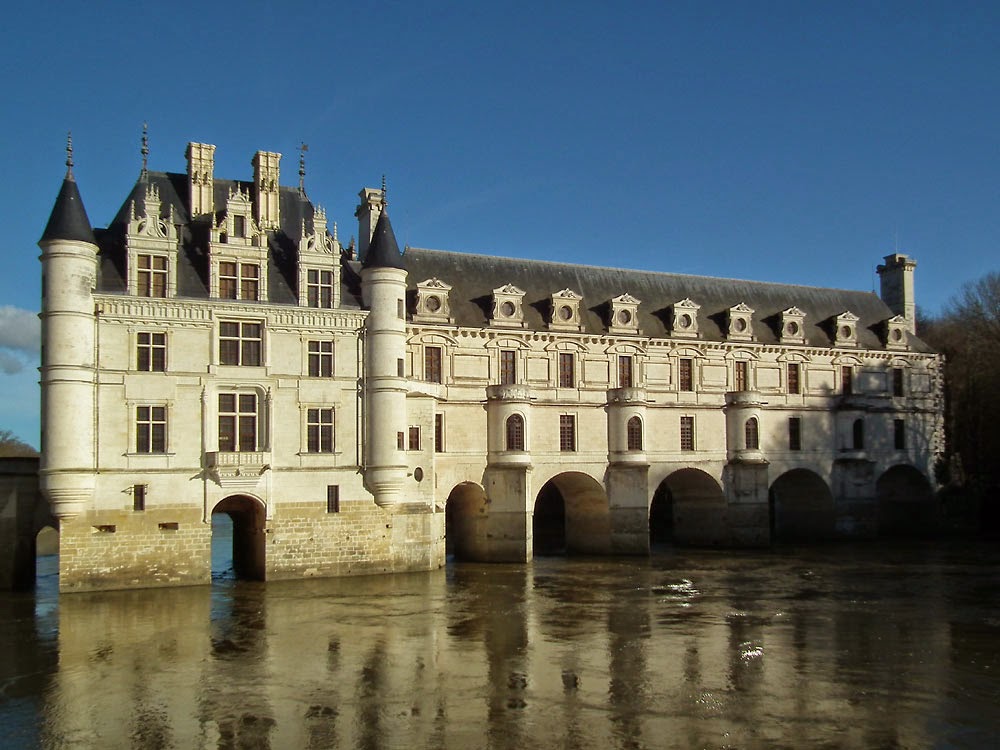 I know. You would think we've been there enough during the year. But actually, it allowed us to see rooms and parts of the grounds we don't normally go to, and without the crowds.

When we arrived there were 4 buses in the carpark and maybe 50-80 cars. This was a bit more than I expected, but not too bad. We had many rooms entirely to ourselves in the house. The decorations are outstanding, especially when you consider the expense they go to compared to how many people actually see them. For an overview of the interior, see this video from the local newspaper.

We all thoroughly enjoyed the day and will definitely do it again next year. It's up to Simon to come up with an equally brilliant suggestion for where we should go. He's the ideas man.

On the way home we stopped at Sublaine to watch the ISS go over. We thought about the international team spending Christmas way up there and waved.

***********************************************
Au jardin hier: After a wild storm at 4 am yesterday there are branches down everywhere in the orchard. The biggest are from the large nectarine by the potager gate and the big purple gage plum. I started clearing them up but after an hour it started to rain so I've still got some to break up and put aside for kindling. I guess I'll have to cut the torn bases of these lost branches on the trees off neatly too.

Cut the torn branches as soon as you can...
today if possible...
winter is the worst time to get infections...
and paint the cut surface immediately with mastic [goujon de pin], allowing it to spread onto the surrounding bark.
Do the plum and nectarine first...
they are the most easily infected!

You will lose the brush, they never can be cleaned...
so come and get one from me...
Outiror were doing sets of 30 brushes...
two packs for the price of one.
So I have 60 "disposable" brushes here specifically for oils, mastics, etc....
that cannot be cleaned off successfully by any means known!
No point in ruining a half-decent brush.

Bah humbug, eh, Susan. Christmas to me is for the food, but most people in France have their big Christmas meal the evening before. I wonder what they all do on the day. Recover from overeating and too much drink, I guess. Sounds like you lost more branches than we did in that storm. Maybe the wind was worse down there.

Tim: I won't be able to reach to put mastic on, and I thought the current view was that mastic makes no difference and you are better not applying it? The trees are riddled with fungi anyway.

Ken: It's not exactly bah humbug. Christmas can be a fun time, but much of it is a minefield, especially once you have a spouse and there are two families involved. Other people's family always do Christmas weird. Also we are gift free these days, which is a blessing from the point of view of not having to chase around trying to second guess what someone will want (and no doubt mostly getting it wrong) but it does remove another special focus for the day. When we lived in London we started coming to France for Christmas because you could always go to a museum here. Now we live here we kind of lost the knack of how to deal with Christmas for some reason until this year.

Re what French people do on Christmas day -- my understanding is they have another big family meal, at lunchtime. It's a good way to ensure everyone gets spread around the inlaws and extended family.

What a great idea and a great day out... We wish! We are on DAY 4 of catering for Family.... Ahhh it is the last one though so we should get some time to ourselves soon. All the very best for new year.

What a brilliant idea! In fact we had a lovely time being catered for by Rhiannon and Stuart. However, the day will come, perhaps sooner than later, when our kids want Christmas to themselves.Then Tim and I will be free agents again and will follow your lead.

For the past three years Tim and I were alone skiing for Christmas. Far less commercialism, shopping and eating frenzy than in the UK.

C&E: You deserve a medal for four days on the trot!

In the words of Mick Jagger It's all over now.... YES

Hmmm...
I can see where you are coming from...
mastic makes no difference if you don't apply it IMMEDIATELY after you've cut...
you can't prune one day and seal up the next... or later.
Small branches when pruned properly do not necessarily need mastic...
especially in nice dry weather...
but older, large branches that have broken off MUST be sealed after pruning...
the wound goes far deeper into the wood than where you can clean up.

And I can understand the sharing of friends/family on Christmas Eve and Christmas Day...
the French don't have Boxing Day...
but surely the emphasis here is on Old Years Night...
at "HowMuch" Euros a head!

I confirm that many French families are involved with a second Christmas meal that is on Christmas Day, I imagine often a bit later than noon. Our family, even just the four of us, definitely does both -- a rather fancy réveillon on the 24th, and a somewhat more relaxed traditional Christmas meal on the 25th. But if we didn't have the kids around, we would likely bag it all and travel.

I'm surprised that any of the châteaux are open on Christmas Day. That sounds like a great time to visit.

Tim: I think New Year is for friends, Christmas for families.

Betty: Cheverny, Villandry and Chenonceau are all open on Christmas day.

Gaynor: I think the problem comes when there are inlaws and/or more than 2 generations. I like doing Christmas with my immediate family, but I doubt if Simon is comfortable with us (nor me with his family). You have to be lucky to bring someone in to the family circle who can cope with Christmas.

... and a very good idea it was too! All in all a grand day out :-)
Completely agree the table in the servants dining hall was one of the best.

Ant: and enhanced by the excellent company :-)