Soft Rush Juncus effusus is a native plant that grows in wet meadows. Nothing much eats it so it can come to dominate a habitat at the expense of other smaller, less robust plants. In order to keep rushes, sedges and woody scrub under control and maintain the highest possible biodiversity some wetland nature reserves, such as the Réserve Naturelle de la Chérine, owned by the LPO in the Brenne, resort to Konik Polskis (='small Polish horses').


Soft Rush in the Forest of Preuilly. Apologies for the atypical example shown. It's doing its impression of Compact Rush J. conglomeratus, due to the dry weather when the photo was taken. 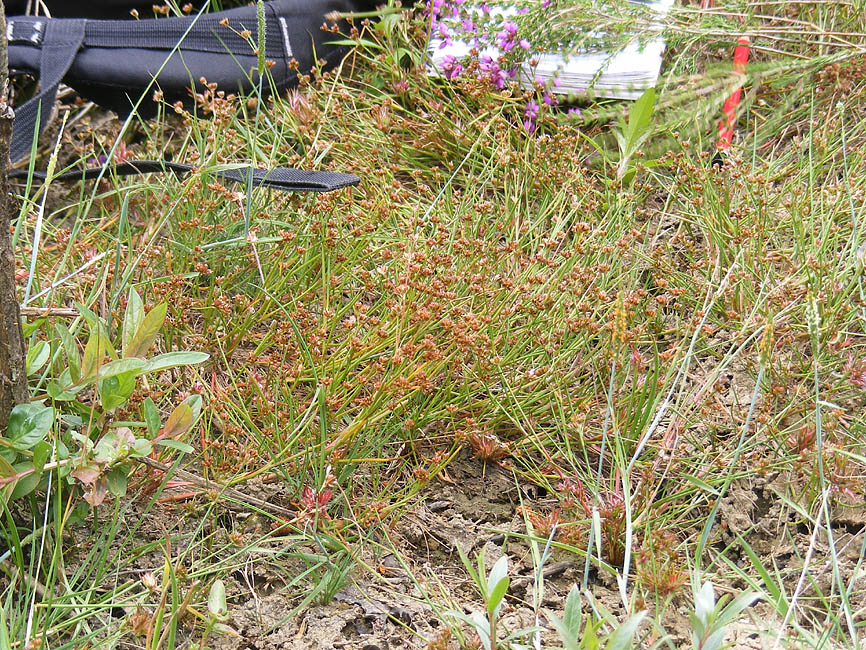 The Koniks are semi-wild, quite close in appearance to the ancient wild horse that would have roamed here in prehistoric times, and formed the bulk of mesolithic man's diet in this area. They have feet that don't suffer from standing on squelchy ground all day and big bellies that can deal with a lot of very fibrous, low nutrient value plant material.


Two young Koniks watch as warden Tony and I survey flies on the Réserve Naturelle de la Chérine several years ago. The third person is my Dad, who was visiting at the time. 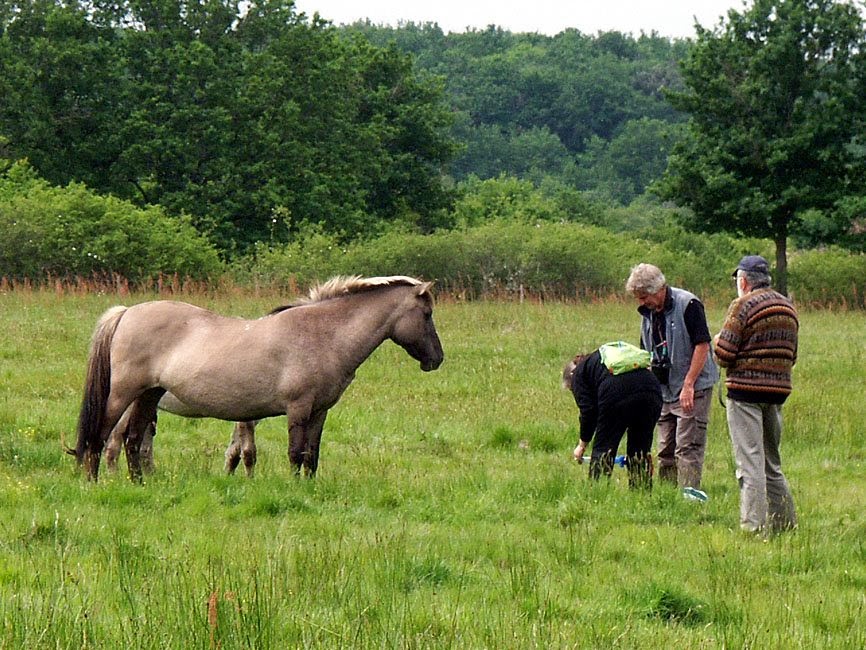 Consequently they are just about the only species that will eat rushes and keep them under control so other plants can have the space to grow and flower. The horses also create a micro mosaic of habitats by trampling bare patches here and dropping piles of dung there. The only alternative to grazing is to mow, which is never quite as successful, and requires more resources.


A Konik mare does her job. 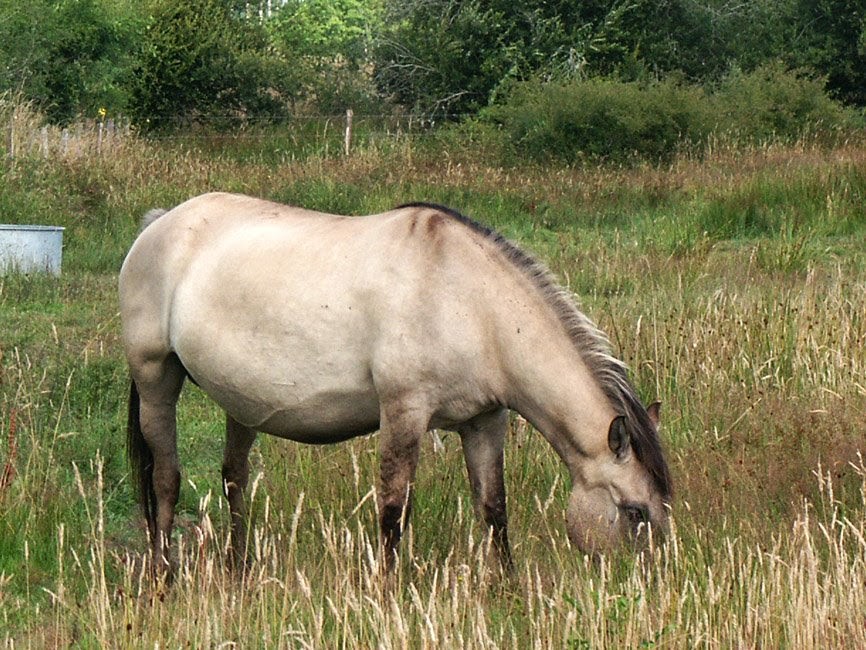 The ponies will munch some of the the rare and interesting flowers too, but after the rush is reduced, they can be moved from meadow to meadow to allow different species to flower at different times. They are kept in natural family groups, with a dominant mare, a mature stallion and assorted youngsters and bachelors. This allows the animals to behave in a natural way and a strong herd instinct prevents straying. This is better for their interaction with the site, meaning they graze the site more evenly than a more artificial (eg non-breeding or single sex) social group might, spreading out more as the bachelors tend to hang around on the fringes of the breeding (harem) group. They tend to graze fairly evenly over their allotted fields, but do have seasonal preferences. Rushes, sedges, scrub, willow bark, nettle, thistle and brambles gain their attention in the autumn and winter, but in summer they are seduced by the lush new grass that appears. Husbandry issues such as worms and hooves are monitored but generally there is no need to treat.

In the Brenne the Koniks are used primarily to manage the areas where the European Pond Terrapin (Fr. Cistude) breed. The trails they make allow the terrapins to move around much more easily.

Email ThisBlogThis!Share to TwitterShare to FacebookShare to Pinterest
Labels: nature and wildlife, Prehistory, the Brenne

Konnies, but also Prewalski's are used in the UK, too....
again very successfully.
When I am mowing here, I like to let the mower scalp the ground in places....
but I haven't managed to get it to leave convenient piles of dung...
must write to the manufacturers...
or...
we could, perhaps, buy a couple of shaggy Highland cooos from the LPO...
they are always advertising them!!

Tim: I didn't know anyone used Przewalskis. The Chérine uses Camargues as well as the Koniks.

Thank you... I knew there was a Z in Prezzies somewhere... but when I put it after the 'e', as above, it didn't look "write"!
They used them initially at Thompson Common [Norfolk Nats] to really damage the terrain and eat mainly, the tussocky and rank grass...
and for some reason, they also did wonders against the Alder carr that was invading the pingos....
but they weren't selective enough.
They were replaced by Shetlands...
which had a tendancy to wander off into Thompson and hang around the Chequers...
thereby NOT doing what they were being paid for...
they were too tame....
they kept undoing the gate latch...
and they didn't eat the right stuff.
I think they now go in with the Flying Flock a couple of times a year.
The Norfolk Nats haven't used Konies to my knowledge.

We saw a few Koniks at the HQ of the Parc Naturel Regional du Perche.
Very different conformation from the hefty Percherons in the other fields.

Tim: I understand the 'pr' is silent for anglophone pronounciation, so they are Zhuszhies or something I think.

Carolyn: they are thoroughly charming animals I always think.

"so they are Zhuszhies..."
as Hush Zhuszhies?
Sorry, had to do it!!

Tim: I don't get it, unless hush is reflecting the silent pr ? Przewalski is pronounced in English as zhe-VALL-ski. In Polish the p isn't silent and the rze is a je or zhe sound but the way it's pronounced is nearly impossible for anglophones. I was suggesting zhuszhies as an equivalent for Prezzies.

Hush Zhuszhies...
Hush Puppies...
shoes that you can wear anywhere and they just shed the muck and dirt...
allegedly.
[Mine didn't! But they were cheap when bought and may not have been Hush Puppies!?]

Tim: I had no idea Hush Puppies were supposed to shed dirt! Don't think I've ever owned a pair.

That was their original marketing ploy...
but I think it was meant to be street dirt... not the places that you or I might venture.

Reading my newly arrived Norfolk Nats newspaper yesterday...
I do wish they'd go back to a nice, compact magazine...
lo and behold...
they ARE now using Koniks up at Holme Dunes to help create a better environment for the Natterjacks.
It really will be Bufo calamita if a hoof meets, or even "meats", a toad!!

Tim: You should just be grateful if it hasn't turned into a lifestyle mag (Soil Association, National Trust, I'm pointing at you).