The Nature of July in the Touraine Loire Valley

Longhorns to Look Out For:

Wasp Beetle Clytra arietas.
Here hiding amongst the nashis in our orchard, but usually more visible on bramble flowers and fence posts or other bare untreated timber. 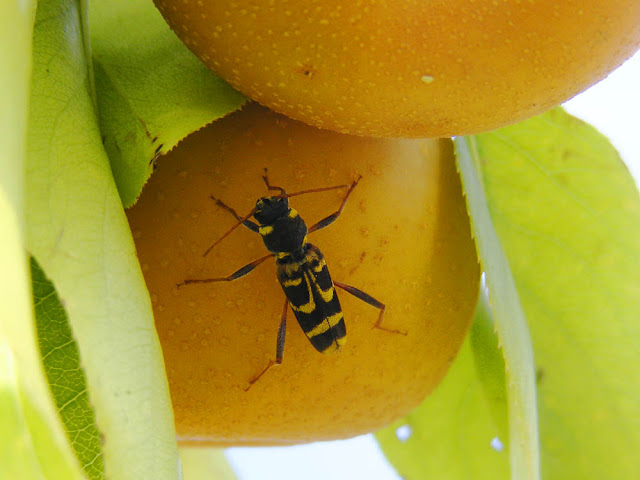 Stictoleptura cordigera, a common and distinctive visitor to flowers at this time of year. 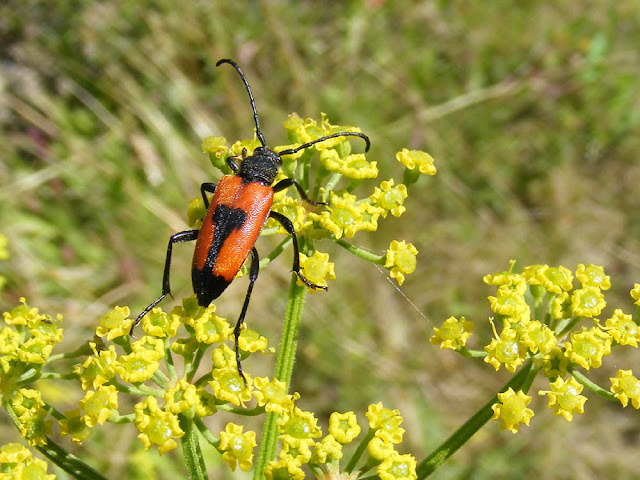 July is one of the warmest and sunniest months of the year here.

***********************************************
French Expressions: Actuel, actuelle = current; actuellement = currently. This is one of the most commonly encountered 'false friends' in my experience. English speakers speaking French use actuellement when they mean en fait or vraiment (me included if I'm not careful). French speakers speaking English use 'actual' when they mean 'current'. For instance, I might inadvertently say 'Actuellement, je ne le connais pas' when talking about someone I don't know, but this would translate as 'At present I don't know him'. I guess this just about makes sense, but isn't what I thought I said. What I should have said is 'En fait, je ne le connais pas'. Likewise, Clément, one of the interns at Chateau Gaudrelle, might say 'The actual owner is Alexandre Monmousseau'. Again, it just about makes sense, but what he meant was 'The current owner is Alexandre Monmousseau'. In Clément's defense though I should point out that English is his third language and his Spanish is way better than mine.
Posted by Susan at 09:00

Susan, your "French Expressions" bits are very useful actuellement....
and I would like to continue to use them...
before you do too many, could you dump them into a seperate page...
alphawotsitty...
otherwise we will all loose where they is...am...are!

And thank you for saving me the time to open Chinnerynot...
I've just seen Stictoleptura cordigera on an Achillea as I walked round the potager.

Tim: to be honest I don't think I can be bothered compilating the French Expressions.

Congrats on the cow-wheat.