The Children of France

The story of Anne of Brittany and Charles VIII's marriage is not a happy one. Quite apart from Anne being kidnapped and forced to marry Charles for geo-political reasons, both of them die young and unhappily.

Anne is in part worn down by fighting to keep her beloved Britanny out of the clutches of the French royal family, but also by multiple pregnancies. She is dead before she turns 40.

Charles on the other hand, is just unlucky. Running through the chateau of Amboise to catch a jeu de palme (real tennis) match, he hits his head on a door lintel and some hours later dies of the injury. He is dead before he turns 30.

Saddest of all though are their attempts at parenthood and providing an heir to the throne. All of their children die in infancy and it is clear from contemporary records that both of them felt the loss of the little ones deeply. 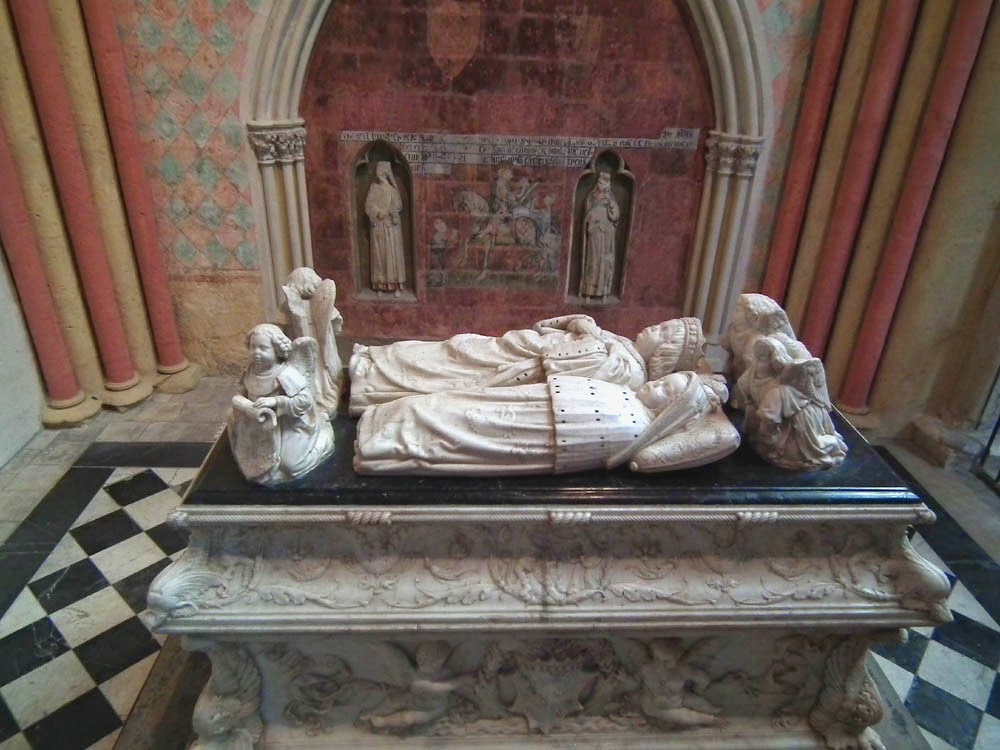 The children are buried in Tours Cathedral of Saint Gatien, and their monument is the earliest Italianate sculpture in France. The effigies on top represent their first-born son, Charles Orland, dead at 3 years old from measles, and their next son Charles, who lived less than a month. Charles Orland in particular was doted on by his parents. These effigies are late medieval in style (15th century) made of Carrara marble in the Tours workshop of Michel Colombe. The sarcophagus itself is the work of another sculptor, Girolamo da Fiesole, working in an Italian tradition.

Girolamo employed typical Renaissance motifs such as winged paws, putti, dolphins on each corner, and a frieze featuring scenes from the lives of Hercules and Samson as well as weird mythological combi-beasts such as centaurs and sirens. The dolphins (dauphins in French) presumably reflect the fact that Charles Orland would have been the dauphin of France (crown prince).  Other royal insignia include coats of arms and one of their mother's personal emblems, the cord.

The two sculptors, working in different traditions, have nonetheless achieved a harmonious beauty and the tomb, originally placed in the Basilica of Saint Martin in Tours (now destroyed) in 1506, was a highly influential work of art in the early French Renaissance. Even centuries later, it was regarded as a touching and beautiful work, a sentiment that saved it from the destruction all around it during the Revolution.

***********************************************
Neonics Extend Their Malign Influence: A paper newly released in Nature by Dutch ecotoxicologists indicates that there is a correlation between neonicotinoid insecticides and declines in farmland bird populations. They are the first to point out that correlation should not be confused with cause, (Bayer is using this argument to defend its product imidacloprid)  but in this case establishing a causal relationship would require extensive and probably unacceptable field experiments (ie deliberately poisoning wild birds). They speculate that the bird populations are declining because insect numbers are declining, thus birds are finding less to eat. It seems that quite low direct doses of neonics (ie if they eat treated seeds) also have a noticeable effect on birds, interfering with their ability to fly. They tested for other correlating factors such as changes in land use, but nothing showed such a close relationship as the decline in bird population since the introduction of imidacloprid in the 1990s. It all points to a cascade of effects that hasn't been seen since Rachel Carson's Silent Spring in the 1960s.

The scientists tested for residual neonics in the environment and found that virtually everywhere had high enough levels to cause sub lethal or lethal consequences not just for insects but for birds too. In a way, the previous focus just on bees has not been helpful, because it meant up till now, no one has looked at the bigger picture. Neonics are highly soluble in water and can remain in the soil for long periods of time, possibly accumulating over time or migrating into the wild plant population. They are generally applied as a coating to seeds before planting, and provide a systemic protection against insect damage by making the entire plant toxic to insects -- roots, stems, leaves, flowers, pollen, nectar. They are highly toxic to invertebrates (worms, insects), reptiles and aquatic species (fish, frogs) but break down on exposure to light. A separate independent study concluded "that even when neonicotinoids were used according to the guidelines on their labels and applied as intended, the chemicals' levels in the environment still frequently exceeded the lowest levels known to be dangerous for a wide range of species—and were "thus likely to have a wide range of negative biological and ecological impacts.""

The results reported might seem obvious to regular newspaper reading members of the public. After all, the media has been catastrophising about the decline in pollinators and the evils of neonics in particular for several years now. But this is first time the actual numbers from broader and long term data have been crunched by scientific analysis (as opposed to newspapers selling opinion being reported as fact), and this was not quite the result that was expected by much of the scientific community. The research focus had previously been honey and bumble bees. There was a general feeling amongst scientists that habitat loss was the key issue, not biocides. And in some ways, that remains true. Habitat is being lost, not only by mechanical destruction, but by being poisoned.

The use of neonics is restricted in Europe, but not banned. The most common treatment for ticks on pets is a neonic, and they can still be used in agriculture and horticulture under certain circumstances. In North America there are many reports of so called 'pollinator friendly' and 'butterfly friendly' plants from major nurseries being treated with neonics, as well as seeds of all sorts.

This is a deeply worrying report, indicating that nowhere is safe from infiltration and contamination by neonics. The previous focus on bees has to some extent not been helpful. As Dave Goulson says, it's caused us to miss the bigger picture. Combined with habitat loss it means that the problem for natural ecosystems in Europe is far more widespread and far more serious than even many of the scientists realised.

I read another summary of that paper... very, very worrying!

I think someone is using neonicotinoids on the cattle around here...
what "clegs" have made it here this year have been at the best less active and easier to swat...
and at the worst, so groggy that I can squish them with my thumb...
and if they are slower in flight....
that makes them an easier target for the swifts, swallows and house martins...
and all the other insectivore species...
including especially, the temporary insect hunters....
the seed eaters that feed their young on insects...
and then, of course, the Libellules...
and...
and...
the chain is endless.

That tu/vous flow chart is funny and even interesting, but it doesn't do much to help people who are learning French.

Here's my advice: say vous to everyone unless you have a good reason to say tu — if somebody asks you to say tu, for example. If you are not a native speaker of French, you will not offend anyone. As your French improves, you'll find yourself saying tu and toi to many more people.

Tim: and of course, clegs get a double whammy, as the larvae are aquatic.

Ken: ahem. I think there might have been a possibility that I was not entirely serious. The flowchart is amusing though, and not that far off the mark.

I have seen it written both ways - Palme in a lot of English .

Beaver: Good question. I looked it up and it used to be spelt jeu de paulme. I think jeu de palme is franglais and me not paying attention.

What a sad story about Anne, Charles and their babies!
Very worrisome news about insecticides. I don't know if you have heard about it but we have been asked not to buy flowers, bushes… from big stores (home depot, Lowe's…).