At the museum in the Poterne at Preuilly there is quite a collection of tools. On one shelf there are several large axe/adze type tools. They are the gift of the Boutet family, who once ran the barrel making business on the market place that I wrote about here.

The long tool at the back is a splitter, used for making the staves that make up the body of the barrel. The two in the front are adzes, used for smoothing the wooden staves and planks. 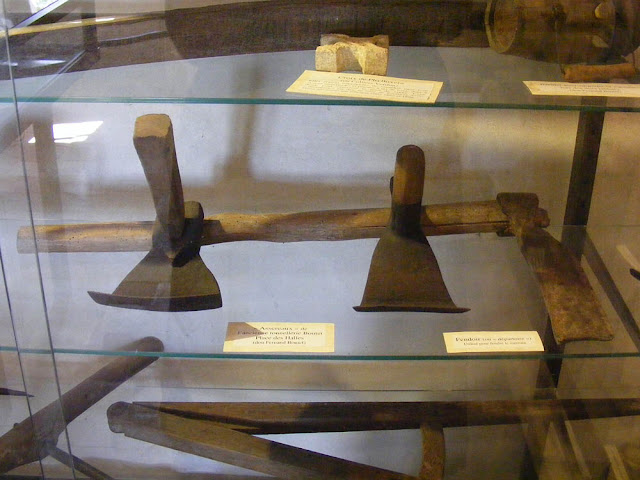 Barrels came in all sizes and were used for storage, transportation of goods and as measuring devices. They were so important to daily life that there was more than one cooper (as barrel makers are called in English) in Preuilly in the first half of the 20th century.

Don't forget that the museum, which is normally only open during the summer holidays because it is run by young volunteers, will be open for European Heritage Weekend (les Journées de Patrimoine), 14 - 15 September, and it will be free. If you live in or around Preuilly, it's a great chance to connect with the local past. The Archaeology Society of Preuilly will be conducting guided tours of the Abbey and around the town, and some historic houses which are not normally open will be welcoming visitors.
Posted by Susan at 09:00