As Preuilly's pool closes for the season, Pittsworth's pool opens. 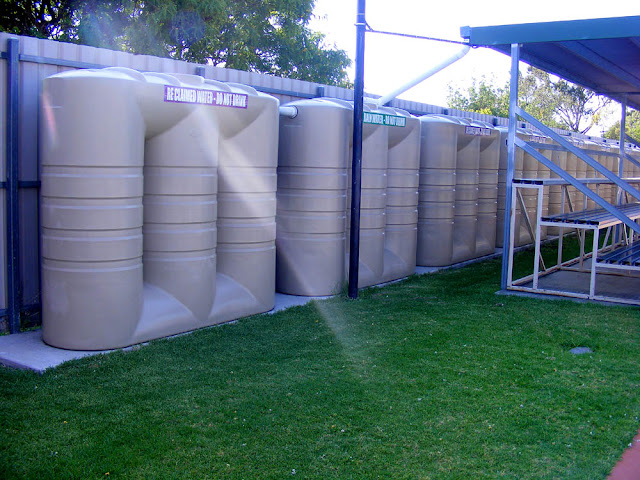 I thought European readers would be interested to see some pictures of the public swimming pool I grew up with. It makes quite an interesting comparison with our local pool here in Preuilly. 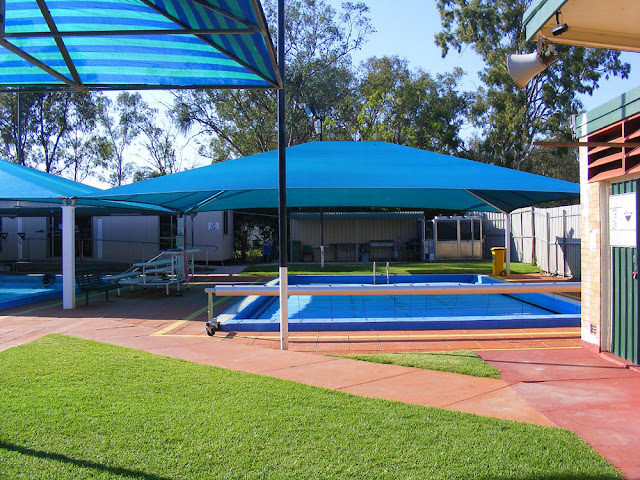 Run by the local authority (as is Preuilly's pool), the basic facility of an outdoor 50m pool (cf 25m in Preuilly) with an additional paddling pool for little kids, surrounded by lawn and paving, with changing rooms to one side, open from September to April (cf July and August, plus weekends in June in Preuilly), is exactly as it was in my teenage years. 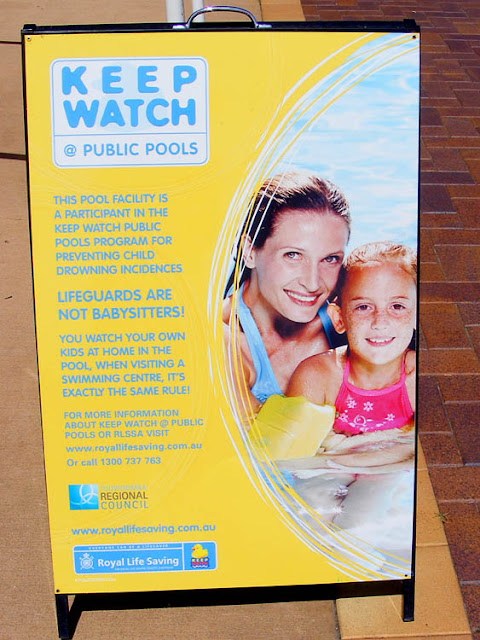 Lifeguards are not babysitters!

Much has changed though -- now there are rainwater tanks down one side of the grounds, saving precious water so that the pool can be topped up even when there are water restrictions due to drought. The paddling pool is completely covered by a shade canopy, and the shallow end of the big pool too. There is a barbecue area tucked away beyond the paddling pool! No shade and no barbecue in Preuilly! 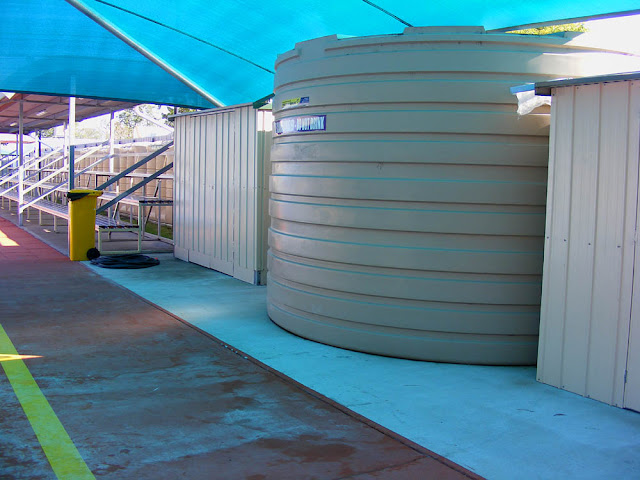 More rainwater storage and a small grandstand for watching competitions.

I can't remember what the opening hours were in my youth, but now it is open from 5.30 am on weekdays, till 6pm (not sans interruption, it has to be said, as there are a few hours closed in the morning, presumably for maintenance or training sessions). On the weekends it opens at 10 am. In Preuilly the hours are 10.30 am -12.30 pm and then it reopens after lunch for the afternoon, daily except Thursday. Before 10 am there are private swimming lessons and other activities. 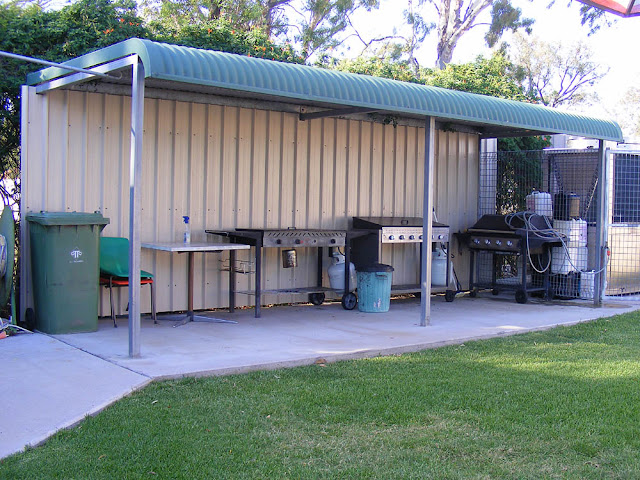 We swam every morning when we stayed with my parents, from 6 am to 7 am, along with half a dozen locals, most of whom must have got there on the dot of 5.30 because they were always there and in the pool before us. (Australians tend to get up earlier and go to bed earlier than Europeans, due to the pattern of daylight hours and higher daytime temperatures.) The pool is now solar heated to a pleasant (I'd guess about 22°C) but not warm temperature (used to be unheated). The entry fee is currently $3 (= €2.40) for adults. Preuilly pool is heated to about 28°C by the communal biofuel pellet burner (which also heats the primary school and the salle des fêtes) and the entry fee is €2.50. 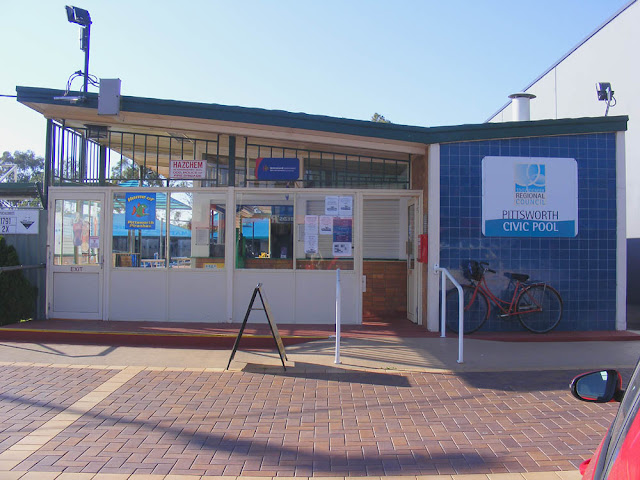 The pool entrance.
*****************************************************************
Il de Ré Reflections - Rare Birds: In several places on the salt marshes we encountered stilts and avocets. They were clearly breeding as both species became very agitated and vocal if anyone or anything passed by. They gamely took on big gulls and other birds much bigger than themselves. At the LPO reserve we were rewarded by the sight of two Stilt chicks. According to someone we got talking to there, the Pied Avocets are in very low numbers this year and last. No one quite knows why. Their breeding success rate has suddenly plummeted, and something is predating the eggs and chicks. It could be coypu taking the eggs at night, but the big gulls, known as gogos by the French bird watchers, are probably responsible for taking a lot of the chicks. They are a big problem on the island, and they dominate the salt marshes. The avocets are not strictly speaking rare, having a very large distribution range and total population, but they are special and it is sad that they are declining on Ile de Ré despite the LPOs best efforts. Ironically, the gogos are declining over much their range, although a pest on Ile de Ré. The Black-winged Stilts are also of conservation concern in France, although not in the wider scheme of things, and much prized breeding migrants to the salt marshes. It may or may not be the same species that occurs in Australia (the taxonomy has yet to be sorted out). They are really sweet looking birds with their big dark eyes, and check out their amazingly long pink legs! Look carefully to see where the legs join their reflection in the water. Simon took some video of the stilts in action which you can see here. 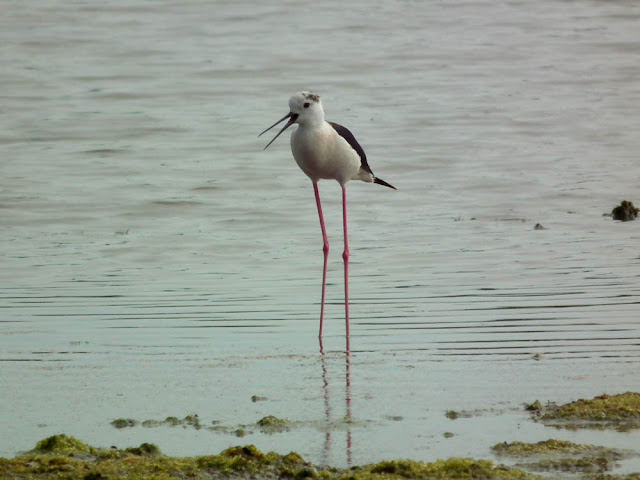 I made sweet dark cherry sponge, from our frozen homegrown stock, with the addition of a couple spoons of vodka syrup soaked sour cherries to add emphasis. Unctuous and sweet.
Posted by Susan at 09:00

What the hell is a Pied Avocet?
I've seen Avocets... but Pied Avocets?

Oh... and Stilts are daft looking birds, are they not?
Flying around with a couple of red knitting needles shoved up their...

If you spot them in the Brenne around now, take a while to watch them as they try to tell their youngsters to go away...
talk about caring parents [not]...
they are quite vicious with that needle like beak!
Added to the long red knitting needle legs that make for a fast run in the marshy ground, that beak must have some poke behind it!

Oh I've found (Pied) Avocet...
in Collins!
Nah! It is just a plain old Avocet...
thought you might have the twitchers going there...
you taxos!!!
Wot-r-u-loik?

On the egg front? Are there foxes, hedgehogs or brown rats on Ré?
All three will swim for a regular supply of food...
and all eat eggs of ground nesters...
and a chick that freezes can still be sniffed out!

Tim: Speaking as someone who grew up with Red-necked Avocets, the ones on Ile de Ré are Pied...

Re the predators, I don't know. The LPO staked out the nests day and night, but whatever it is was incredibly stealthy and they are still not sure what it was.

I'm familiar with Stilts and Avocets; they were plentiful at the Salton Sea. I wonder if they are the same as their counterparts in Australia and in France. They sure look similar! Are they migratory birds?

chm: according to Wikipedia the American species of both are different, but they all look very similar.

The Australian pool certainly looks enticing. I'm sure it didn't have a cover when you were a kid though. I think it's wonderful that they'd covered all the Australian pools now. Are lane swimmers more disciplined there than they are here? I love swimming but find it difficult to take the crowded lanes where people are so rude, especially the men.

Fraussie: No, as I say in the post, the cover is one of the changes. I don't know if the swimmers are more disciplined -- I haven't swum in a crowded pool for years. There is no problem with swimming up and down either in Pittsworth or Preuilly as there is at most 20 people in the pool at any one time. To be honest, I am probably one of the undisciplined ones, as I don't do a lot of actual swimming and quite a lot of bobbing up and down chatting. I've never encountered rudeness though, just politeness -- 'oh pardon' from both parties if there is an accidental collision.