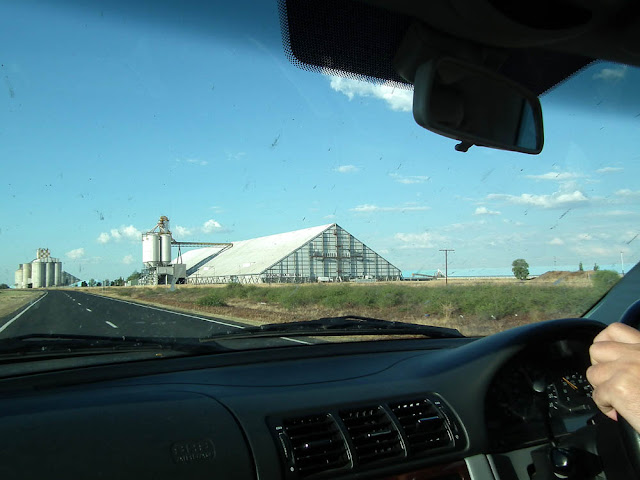 Just as at its sister facility at Thallon, the Graincorp silos at Moree were working day and night to process the wheat harvest in early December 2012 when we drove into town. The 2011-12 crop Australian wheat crop was a record 29.5 million tonnes, but the 2012-13 crop is expected to be down significantly (government estimates were 22.5 million tonnes). 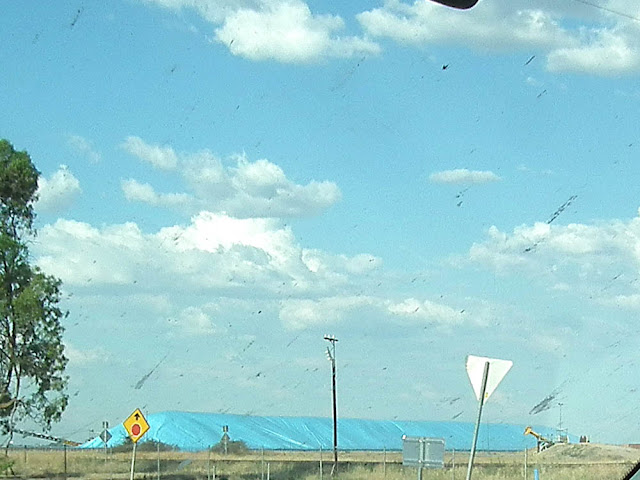 These blue tarps seem to be standard issue for protecting the big piles of grain. I found it quite disconcerting that they are not quite the same colour as the sky.


We were astounded to discover that France beats Australia as a wheat producing nation by a country mile. Last year the French wheat harvest was 35.2 million tonnes and this year the estimate is for 38.24 million tonnes. France is the 5th largest wheat producer in the world and the 2nd biggest exporter. Australia is the 9th largest producer and the 4th biggest exporter. Another difference is that France is producing almost entirely soft wheat, whereas Australia, with its hotter, drier climate is producing mostly hard wheat.

It really gives you an insight into how much growing conditions in the two countries differ. In general French soils are deep, fertile and alkaline. Rainfall is even and reliable enough. Australian soil is poor, shallow, acidic and lacking in phosphorus. Rainfall is sporadic and unreliable. Wheat is too often grown on marginal land. It makes you wonder how the country got a reputation (amongst Australians anyway) as one of the big wheat producers, with only wool to rival it in importance as an export crop.

*****************************************************************
Ile de Ré Reflections - baigneurs et bagnards: The isle of Ré is the happy destination of hundreds of French families on holiday enjoying the sun and sea. It is also the site of France's largest maximum security prison (maison centrale), situated in the town of Saint-Martin-de-Ré, within the forteress walls designed by Vauban. The fort was always intended to be part prison, and the facility has places for 500 prisoners. Currently 485 are occupied, a quarter of them by those serving long terms, and the prison (bagne) is the island's biggest employer (over 10% of the population work there). 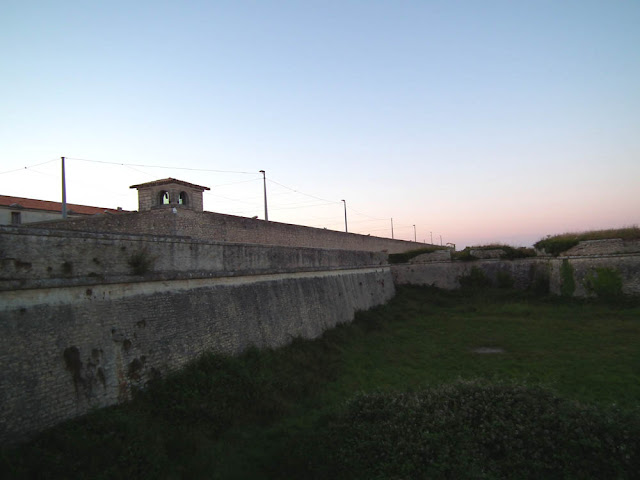 Until 1938 the prison acted as the departure point for prisoners being transported to the prison colonies in Guiana (including Devil's Island) and Vanuatu. Amongst those who went through Ile de Ré was Alfred Dreyfus.
Posted by Susan at 09:00

That is a nice salle de fêtes they've got there!!
But doesn't the Four-ex get a tad warm being in those outside tanks??
Unless, of course they are tanks full of Festers...
in which case a few days in the sun might actually add some flavour...