A Yellow Meadow Ant alate shakes off a worker from another nest. 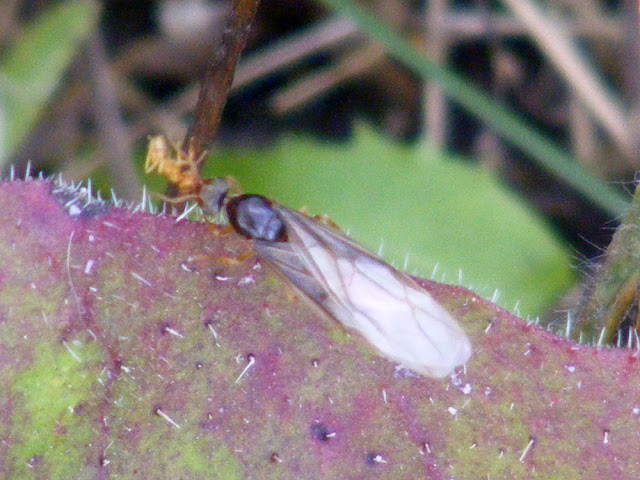 Every year winged Lasius spp ants emerge from their nests in the ground and form subtle shifting clouds above the trees with their mating swarms. The books all refer to this as occurring in July and August, but my observation is that late September is the moment in the Touraine - just in time to feed hungry swallows fattening up for their imminent and epic return to Africa. These flying, sexually mature ants are referred to as alates. 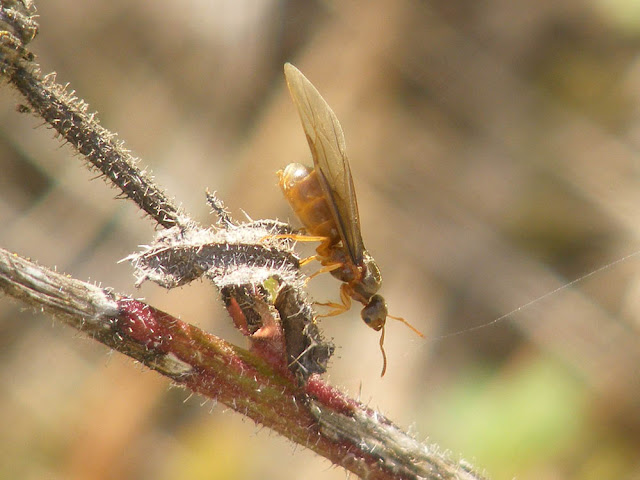 I am also pleased to see that the orchid seed pods in the orchard, including those of the late flowering Broad-leaved Helleborine Epipactis helleborine, have all split open and distributed their seed. Next year could be exciting!
*********************************************************************
A la cuisine hier: Potager Pie -- that's basically Cottage Pie, but with about a 4:1 ratio of vegetables to meat. Probably also known as Fridge Pie. You can use any veg you like, especially if it needs using up, and the mash on top doesn't have to be just potato. Also good for sliding unloved veggies past the fussy eaters in your household. Sadly, none of the veg I used was actually from our own potager except the potato.

Green Vegetable Soup -- that's another one for clearing out the fridge. Just sweat any green vegetable you have hanging around, add vegetable stock and a couple of diced potatoes, simmer for a while then blitz.

Poached Pears -- the Beurre Hardy and Nashi pears picked a week ago, poached in syrup infused with vanilla, lemon, cinnamon, cardamon and pimento. This technique has the added bonus of giving you not just poached pears, but lots of flavourful poaching syrup which can be turned into sorbet.

Apple Jelly -- quite a firm set as made with slightly under ripe windfall apples.

In other news, Chateau Gaudrelle (Vouvray) tell us that they are harvesting from 10 October -- their latest ever harvest. Christian Davault from Domaine de la Chaise (Touraine) says he will be harvesting next week, which is his normal time.
Posted by Susan at 09:00

"mounds build up over decades"...
YES!
And then Couch / Twitch Grass grows on top...
and THEN...
I discover it with the mower!!
GRRRRR!!

However, a very informative article... tareversuch!
I might not go Grrrr so much next time I hit one!!

On the otherhand...
so glad to hear that you've loads of bookings...
even if it means you lose a bit of harvest...
you were looking a tad distracted when you collected Pauline last!

And alates are refered to by me as ALL LATES....
because if I see an un-winged queen...
or one searching for somewhere to set up home...
rapidly becomes LATE! Very LATE!!